The former president offered to end his hunger strike if the government met his demands, but the authorities appear in no mood to back down. 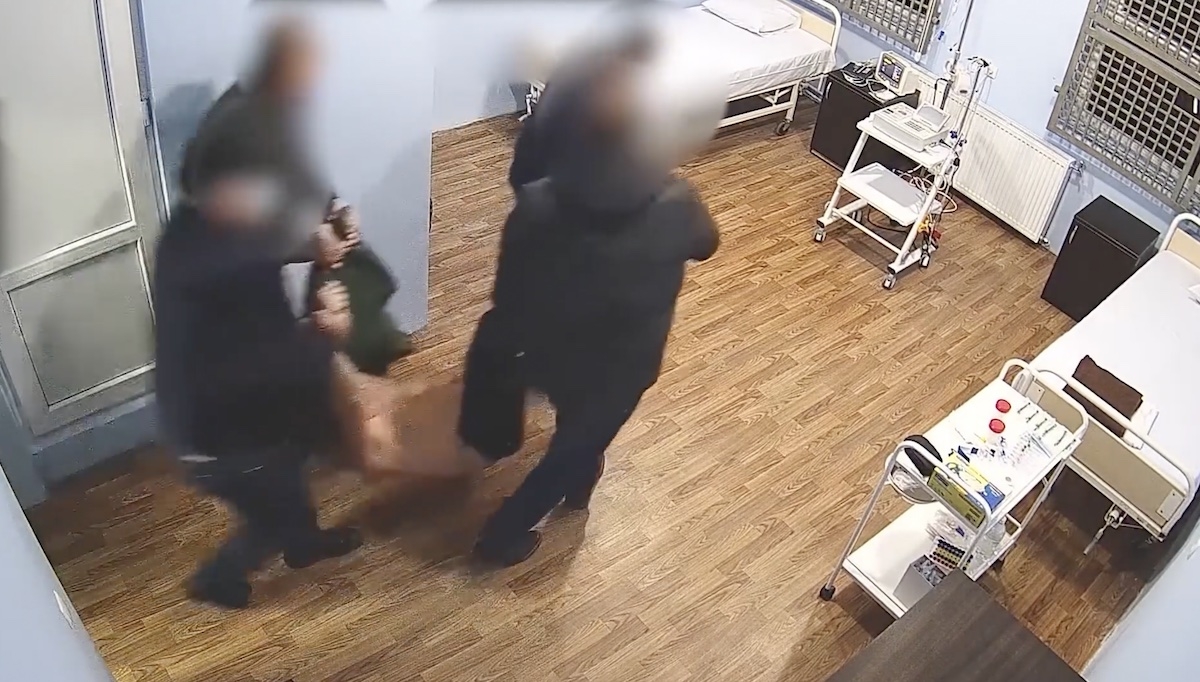 Former Georgian president Mikheil Saakashvili being carried into a prison medical clinic, in a video released by the country's Special Penitentiary Service.

Former president of Georgia Mikheil Saakashvili offered to end his month-plus hunger strike if the government acceded to his demand to be transferred to a civilian medical facility, but the authorities have rejected the idea.

Saakashvili made his proposal on November 11, following a call from the European Court of Human Rights for him to cease his hunger strike. The court also urged the Georgian government to report to it on Saakashvili’s condition, as well as about the medical treatment dispensed in the prison hospital.

“They [Georgian authorities] should ensure his safety in prison in general and should provide him with appropriate medical care for the post-hunger strike recovery period,” the court said in a decision in response to Saakashvili’s appeal to the court for interim measures.

In a Facebook post, Saakashvili responded to the ruling saying that a committee of doctors should recommend a suitable clinic to help him through the “post-starvation rehabilitation process.”

“[A]s soon as this decision is made and I am transferred from this facility to the appropriate facility, I will immediately end the hunger strike,” he wrote. He repeatedly accused Russia of attempting to mastermind his killing: “Vladimir Putin is the only one who ordered this assassination.”

The potential compromise initially appeared to offer a way out of the crisis that has consumed Georgia since Saakashvili’s return at the end of September. His subsequent arrest and hunger strike, and the government’s unaccommodating stance in response, have resulted in a game of political chicken threatening the country’s tenuous stability.

Saakashvili and his lawyers had been demanding that he be transferred to a civilian medical facility because the Rustavi prison clinic did not have all the capabilities needed to properly care for the hunger-striking former president. They also argued that being treated in prison would put him into close contact with criminals who had been convicted during the tough-on-crime former president’s time in office, rendering him vulnerable to revenge attacks.

But the government seems to see no need to meet Saakashvili halfway. On November 8, 42 days into his hunger strike, the authorities transferred the former president – against his will – to Gldani, the site of a dedicated prison hospital but which also is adjacent to other facilities holding criminals convicted of grave crimes.

Indeed, immediately after Saakashvili was transferred to Gldani, footage emerged from various sources of other inmates shouting insults at the former president. “We’ll get him and fuck him up. We will reach that son of a bitch! Fuck Misha!” inmates were heard shouting in the videos.

Other videos then were released by the State Penitentiary Service on November 11, showing Saakashvili being forcibly dragged to the Gldani prison. The government seemed to want to show the president as an aggressor – he was seen pushing medical equipment off a table, shouting belligerently, and shoving a prison employee. He called prison workers “murderers,” “a dictator’s puppets,” and “Putin’s slaves.” He also insists on being taken back to Rustavi.

But many saw the footage instead as evidence of how inhumanely the former president was being treated, dragged shirtless through the halls of the prison.

The human rights ombudsmans of both Georgia and Ukraine (Saakashvili also is a Ukrainian citizen, and currently an adviser to President Volodomyr Zelensky) criticized the Georgian government for “disturbing footage” showing “violation of the right to honor, dignity” and “torture and ill-treatment.”

Zelensky spoke with Georgian Prime Minister Irakli Garibashvili on November 12; Zelensky said in a tweet that he insisted that “the rights of Ukrainian citizen Mikheil Saakashvili must be fully guaranteed in accordance with international norms.”

Garibashvili, meanwhile, reported that he told Zelensky that Saakashvili’s actions were “provocative,” “destructive” and “a threat to the country's stability” and that “interference by Ukrainian citizens in Georgia's internal affairs was unacceptable.”

Government officials seized on the language of the European court’s ruling that the government should report on “the medical treatment dispensed in the prison hospital” and “to ensure his [Saakashvili’s] safety in prison in general” as a tacit endorsement of their refusal to allow him to be transferred to a civilian clinic.

“The European court has called on Mr. Saakashvili to end the hunger strike. We will be very happy if he agrees ... but without any conditions,” Justice Minister Rati Bregadze said in a November 11 interview with TV network Rustavi 2. “Why should this person be taken to a private clinic? Can anyone explain to me?”

But Deputy Health Minister Tamar Gabunia has at least partially supported Saakashvili’s allies’ claims that the Gldani prison hospital is not properly equipped, saying that while it had some of the necessary capabilities it lacked some “high-tech equipment” that may be necessary.

Members of Saakashvili’s United National Movement party also met with government representatives on November 11 and promised that if the former president were transferred to a civilian hospital, they would not hold rallies nearby. Officials have worried that Saakashvili may be using the demand for a transfer to a less-secure civilian facility as a ruse to allow his supporters to forcibly free him.