Georgian government under fire for investigations into far-right violence

Rather than trying to punish the perpetrators of the attacks on journalists and LGBTQ+ activists, the authorities seem intent on blaming the victims. 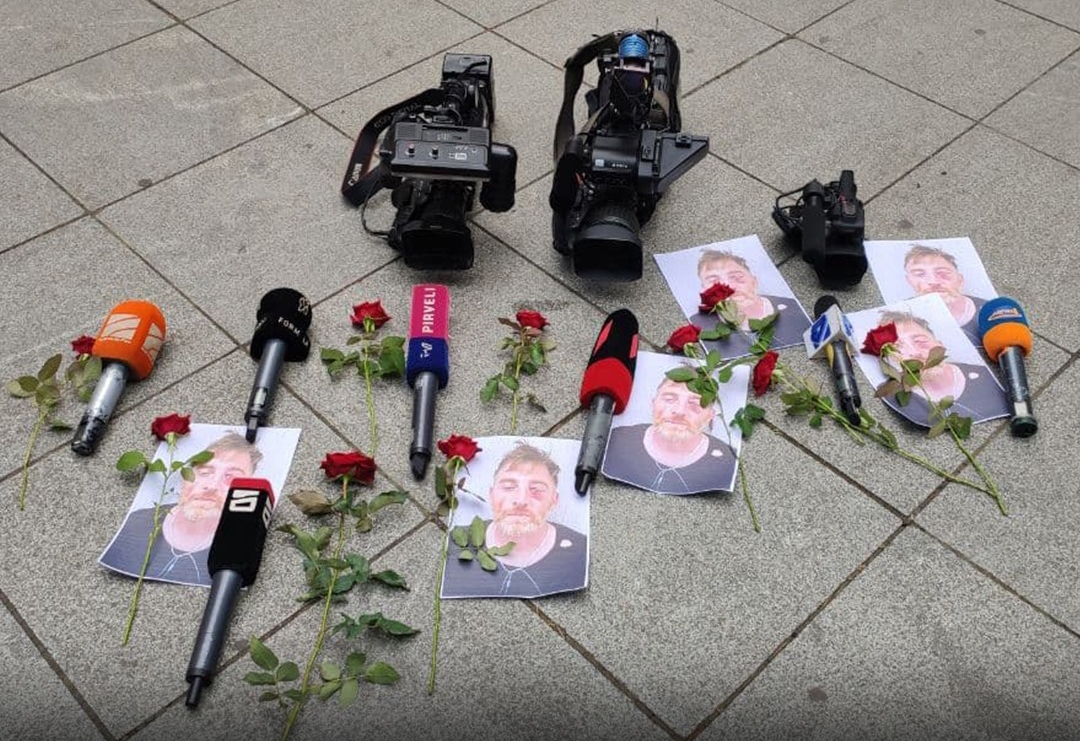 Police investigations into the death of a Georgian cameraman and mass attacks on journalists by far-right mobs have done little to assuage widespread anger with what many see as the Georgian government’s responsibility for the violence.

The authorities have made scores of arrests since the violence erupted on July 5, and on July 16 police searched the apartments of two radical movement leaders. But none of the leaders of the groups who carried out the violence have yet been charged with any crime.

At the same time, government officials are accused of launching a smear campaign against the cameraman who died. Police also have come under criticism for their treatment of his body following his death, creating the impression of a coverup. And questions remain over the lax police presence on the day of violence, suggesting that they did not take seriously their mission to protect the public.

Lekso Lashkarava, a cameraman for the TV network Pirveli, was severely beaten on July 5 when he tried to defend his colleague, news reporter Miranda Baghaturia, from violent mobs that raged through the city in search of LGBTQ+ activists. He was one of as many as 53 journalists who were attacked by the hate groups, led by priests and far-right figures who sought to prevent a planned Pride march from taking place.

Lashkarava died on July 11, two days after he was released from hospital, enraging many Georgians and sparking large demonstrations in Tbilisi. The investigation into his death has further deepened suspicions that the government has no interest in pursuing justice in his killing.

On the day he died, police showed up at his apartment and swiftly removed his body, over the protests of his family. “I threw myself over his body, but they pulled my hands behind my back,” recalled Lashkarava’s distraught mother Tinatin Kakhidze. “My sister lay in a corner. They beat her.” Police taking the body ran out of the apartment with it, shocking viewers who watched the televised scenes.

Meanwhile, the authorities almost immediately began hinting that Lashkarava may have in fact died of a drug overdose. The day he died, the Interior Ministry began releasing snippets of security camera footage of Lashkarava’s movements the day before.

The ministry claimed the video depicted Lashkarava purchasing narcotics and that he got sick as a result. They released official forensic reports saying that several drugs were found in his body. “They are trying to destroy my son,” Kakhidze responded to journalists.

Skepticism has been further fueled by the authorities’ insistence that Lashkarava’s injuries played no role in his death, even though the forensic investigation has yet to arrive at a final conclusion as to the cause of death.

The government also has been claiming that it did not expect the violence near where Lashkarava was attacked, at the offices of the opposition movement Shame! They say police efforts were focused on the planned Pride event.

Critics, though, say there was plenty of warning that the violence was broader than that.

At about noon on July 5, Konstantine Morgoshia, one of the mob leaders and founder of Alt-Info, a far-right news platform, told followers gathered in front of the parliament building that activists from Tbilisi Pride, the group that tried to organize the march, were hiding in the nearby offices of Shame! “I want about 500 to 600 to follow me to their office,” Morgoshia told the crowd, speaking in front of television cameras.

Only a handful of police officers were at the site of the office, though, and could do little as the crowd attacked Lashkarava and Baghaturia.

In the wake of the violence, many news outlets and journalists have demanded that Prime Minister Irakli Gharibashvili step down for his failure to prevent, and for appearing to encourage, the violence to rage in the heart of Georgian capital. Gharibashvili has been unrepentant, describing the proposed LGBTQ+ pride march as “propagandistic” and unacceptable for the majority of Georgians.

He also defended the Georgian Orthodox Church, which mobilized supporters against the pride event. Several priests were directly involved in the violence.

Much of the Georgian media has since declared war on the government. At several government press conferences, reporters have taken over the stage and demanded justice for Lashkarava and other journalists attacked in the violence. Four opposition-oriented television networks have been crusading against the government and demanding Gharibashvili's resignation .

In response, officials from the ruling Georgian Dream party have refused to talk to the stations.

The government continues to come under heavy international criticism. A U.S. State Department spokesperson did not rule out sanctions against Georgia, and on July 15 European ambassadors to Georgia issued a collective statement criticizing the government. “[R]event events have cast a shadow over EU-Georgia relations and Georgia’s image as a country upholding basic human rights,” the ambassadors said.