Last year, the TV host insulted Vladimir Putin in an obscene rant. Now, he says, Chechen strongman Ramzan Kadyrov is trying to kill him, and Georgian authorities seem to agree. 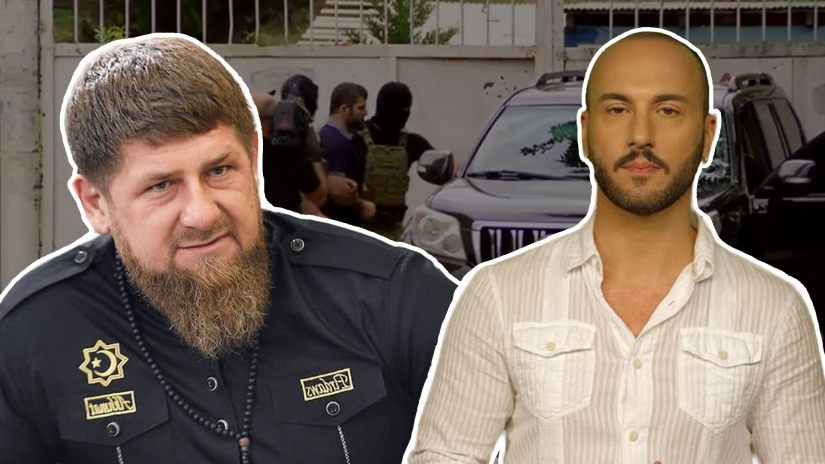 Photo illustration by Mtavari Arkhi of one of its journalists, Giorgi Gabunia (right), who claims that Chechen leader Ramzan Kadyrov (left) is trying to kill him.

Georgian journalist Giorgi Gabunia, who made headlines last year with an obscene, on-air tirade against Russian President Vladimir Putin, says he was the target in an assassination plot recently uncovered by Georgian security services.

The alleged hitman, Vasambeg Bokov, a Russian national from Ingushetia (bordering Chechnya), was arrested in a security operation on June 12.

Gabunia and his colleagues have claimed that their sources have said he was the intended target and that Kadyrov was the plot’s mastermind.

Nika Gvaramia, director of the opposition television station Mtavari Arkhi, where Gabunia is a host and Gvaramia’s deputy, said that Ukrainian security services had tipped off the Georgian authorities of the conspiracy. “For a few months now, the life of one of our main television personalities, who is also my deputy, has been under threat from the world’s terrorist number one and the pillar of Putin’s terrorism, Ramzan Kadyrov,” Gvaramia said.

The Georgian authorities have not directly corroborated those claims, but their public comments are suggestive.

“Any violent retribution against a journalist is inadmissible and we will not let anyone do it in our country,” said the speaker of parliament, Archil Talakvadze, on June 16. “This crime would have tarnished the reputation of Georgia and of the Georgian government had it not been prevented by the security services.”

“I’d like to thank the security services for carrying out this operation and preventing this criminal plot that threatened not just one man’s life but also threatened to spark tensions and instability in Georgia,” said Gia Volski, the deputy speaker, explicitly mentioning Gabunia’s name.

Both Talakvadze and Volski are members of the ruling Georgian Dream party, which Gabunia and Mtavari Arkhi strongly oppose. Georgian government officials have shunned the network, refusing to appear on it.

Last July, in the heat of a controversy over a Russian MP’s appearance in the Georgian parliament, Gabunia opened his show with a lengthy, elaborate, and very profane excoriation of Putin. “Vovochka, you street scum, you piece of dog----,” he began, and it only got more obscene from there.

The performance earned Gabunia a suspension from his show at the network Rustavi2, which later controversially changed ownership and was effectively reformed as Mtavari Arkhi.

The outburst also caught the attention of Kadyrov, who obliquely threatened Gabunia the following day. “The world is full of millions of young people who are deeply reverent of Putin. Gabunia better hide behind seven fences, because the first person he encounters will do to him what he deserves,” Kadyrov wrote on Telegram.

After the more recent allegations came out, Gabunia said that his bodyguards had noticed that he had been followed a few months ago. “The danger is still there,” he said. “It would be naïve to believe that one man gets arrested and it is all over, as all of this is linked to Vladimir Putin, who can pick any other man to do the same.”

It's unlikely that Putin himself would bother with taking revenge on Gabunia, said Mark Galeotti, a London-based expert on Russian security affairs. But Kadyrov – a fierce Putin ally but also a loose cannon – may be a different story.

“I don't think this has anything to do with the Kremlin, but it absolutely fits Kadyrov's murderous style,” Galeotti told Eurasianet. “The Russian state doesn't run (or approve) assassination missions just because a shock jock says something nasty about Putin's mother, but Kadyrov seems often to operate pretty much autonomously and he seems to consider Georgia part of his 'sphere of influence.’"

Kadyrov has not responded to the accusation. The Georgian Security Service did not refute the allegations, but advised against making claims while the investigation is still in progress.