The only question Georgian journalists had for the prime minister, as he attempted to host a pro-European summit of post-Soviet states: When will you step down? 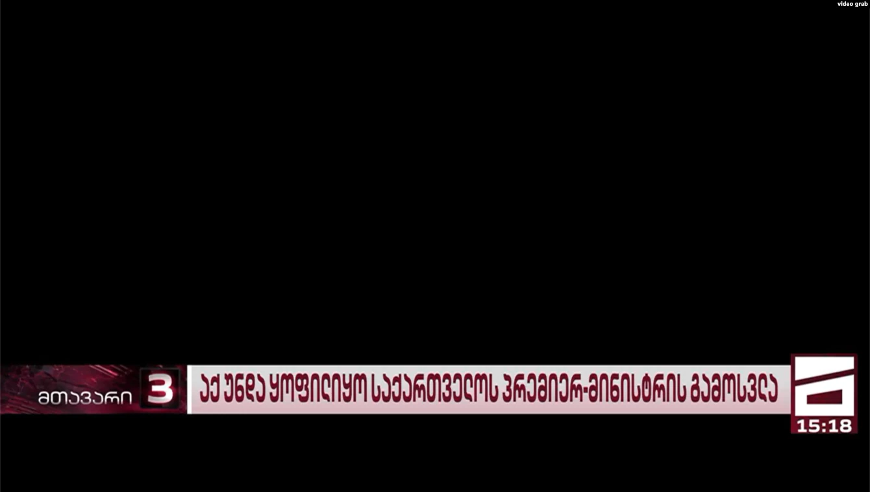 Georgian opposition TV network Mtavari Arkhi went blank in protest during an address by Prime Minister Irakli Gharibashvili. "The speech of the Prime Minister of Georgia should have been here," the caption reads.

What was meant to be an international celebration of Georgia’s European aspirations was overshadowed by a continuing protest by the country’s media following far-right violence that injured dozens of journalists.

At the July 19 Batumi International Conference, senior Georgian leaders hosted the presidents of Ukraine and Moldova, the heads of fellow post-Soviet, pro-Western governments, as well as the head of the European Council. The three heads of state signed a symbolic declaration vowing to cooperate on “the peaceful, democratic and prosperous European future” of their countries.

But the timing for the Georgian government was awkward, coming just two weeks after far-right mobs rampaged through Tbilisi as they tried to disrupt an LGBTQ+ Pride event, attacking up to 53 journalists. The mobs also twice tore down European flags flying above the Georgian parliament building.

At a joint press conference by Council of Europe President Charles Michel, Georgian Prime Minister Irakli Garibashvili and members of the Georgian political opposition, some journalists protested outside the venue, carrying signs in English and Georgian reading “No to violence,” “Homophobia Kills,” “Democracy is under threat,” and “Media under attack.” They also displayed photos of Lekso Lashkarava, a cameraman who died after being attacked that day.

“When will you step down? There are no other questions,” journalists shouted at Garibashvili as he tried to make his statement, before giving up.

Critics of the government’s lax response, or even encouragement, of the July 5-6 violence have focused on Garibashvili, who said repeatedly that the march should not be held and that he intends to rule on behalf of the majority rather than protecting the rights of minorities.

During a speech by Garibashvili at the event, pro-opposition TV network Mtavari Arkhi suspended its live broadcast. “The channel will return to the Batumi International Conference during the speeches of Charles Michel and the presidents of Ukraine and Moldova,” the anchor explained.

Also at the event, 53 media organizations and NGOs presented Michel with an open letter asking the organization to “continue to communicate actively with the Georgian authorities and make public statements about the country's democratic failures.”

“The homophobic violence that erupted this month undermined basic human rights in the country and called into question Georgia's democratic aspirations. The Georgian government failed to protect its own citizens and encouraged violence by far-right groups,” the letter said. “Despite the arrests of several individuals, the organizers of the violence go unpunished, the ruling party continues to attack the media, and boycotts critical media outlets, violating Georgia's commitments to uphold the standards of freedom of expression and information.”

At the press conference, Michel said that the rights of minorities are not a marginal issue. “Respect for diversity and human dignity are essential to our fundamental values,” he said. “The constitutional rights to freedoms of expression, press and assembly must be upheld.