Following the death of a cameraman who was attacked by a far-right mob, thousands rallied against the government, which they blamed for condoning the violence. But the authorities only doubled down. 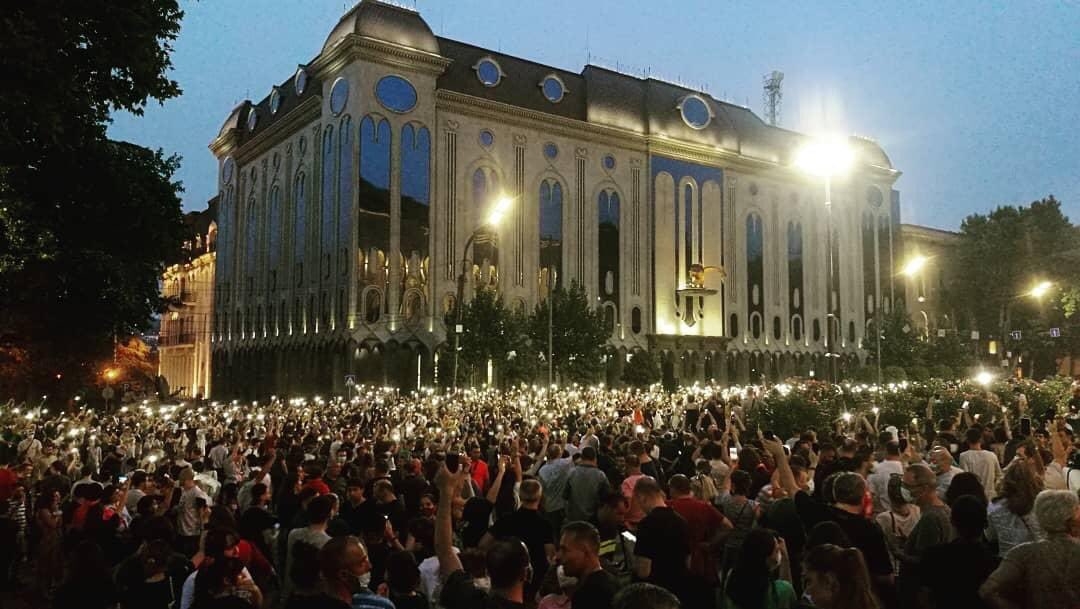 The anti-government demonstration in Tbilisi on July 11 (photo by Shorena Tevzadze, used with permission)

Following the death of a cameraman who was attacked in anti-media and anti-LGBTQ+ pogroms, dozens of Georgian media outlets and thousands of supporters gathered in protest, blaming the government for condoning the violence.

The unprecedented July 11 rally brought together virtually every Georgian television network, even traditionally pro-government channels. “I would like to ask my colleagues to cover their camera lenses with their hands for a moment,” veteran videographer Kakha Janashvili told the crowd at the rally. As TV screens went dark across Georgia, he continued: “Is this darkness what you want?”

The demonstration followed the announcement earlier in the day of the death of Lekso Lashkarava, a 36-year-old cameraman for TV Pirveli. Lashkarava was badly beaten by a mob, one of 53 journalists who was attacked on July 5 as far-right groups rampaged through the city in an effort to prevent a LGBTQ+ Pride event from taking place.

Lashkarava was released from the hospital on July 10, but then was found dead in his bed the following morning. The investigation into the cause of death is ongoing, but Georgia’s press corps has blamed the government, accusing the authorities of looking the other way as the violence raged on July 5, or even tacitly condoning it.

Reporter Miranda Baghaturia, who was covering the events of July 5 with Lashkarava, said that he was beaten by a group of 20 men for 10 minutes, while the single police officer on the scene could do little. “I was kicked first. Then a priest pulled me by the hair and said that he was finally going to shut me up. Lekso said ‘What are you doing?! She’s a journalist!’ and that’s when they turned on him,” Baghaturia said in televised remarks later that day. “As some men held me against the rail, I screamed and begged them not to kill him.”

At the rally, much of the anger was directed at Prime Minister Irakli Gharibashvili, who had criticized plans to hold the Pride march on the morning of July 5, saying that the majority of Georgians were against the march and claiming that it had been backed by the political opposition. “Resign!” protesters chanted.

Critics said that ultraconservative groups took Gharibashvili’s words as a green light to attack LGBTQ+ activists, as well as supporters of the political opposition and the media. “He effectively opposed the LGBTQ+ community’s constitutional right of freedom of expression,” Nino Danelia, a media studies scholar, told Eurasianet.

“We are not going to cover anything you [the authorities] do because your lies must end,” news anchor Eka Mishveladze, from TV Priveli, said at the rally. “Now you will see what angry media are like!”

The demonstration also saw an outpouring of support for LGBTQ+ Georgians’ long-running fight for public acceptance, and criticism of the powerful Georgian Orthodox Church for opposing it. Some referred to the country’s “Iranization,” for what they saw as the church’s outsized influence on cultural issues.

“Christianity is about humility and tolerance. Its credo is not to judge and, most importantly, not to kill,” said popular TV host Maia Asatiani at the rally. “The true Georgia is here today – free, independent and colourful!”

The day after the rally, Gharibashvili doubled down, describing protesters as “anti-state and anti-church.” He repeated his accusation that the planned July 5 event was part of a “conspiracy” by the opposition and shocked liberal Georgians with a homophobia-tinged rant. “When 95 percent of Georgia is against demonstratively holding a propagandistic parade, we must obey,” he said, adding that “the only parade I know is a military parade.”

Following the July 12 comments, journalists gathered at parliament and some broke into the hall, resulting in several scuffles. Opposition parties threatened to boycott parliament unless Gharibashvili steps down.

“The statements [Gharibashvili] has been making not just encourage violence but rather directly tell violent groups that they are free to mobilize to attack anyone with impunity, including the groups he personally dislikes, and that includes critical media,” Danelia said.

“It is obvious that the authorities are doing everything to blame the victims, not the criminals, because in fact they are linked to these violent groups and every statement they make only confirms it,” Ninia Kakabadze, a media and LGBTQ+ rights activists, told Eurasianet.

Media, meanwhile, were rallying the public in their battle with the prime minister and far-right groups, arguing that press freedom is at stake. “Today we live in a country where journalists are killed, where the government’s message to criminals is go attack everyone holding a microphone,” said veteran news anchor Inga Grigolia in an emotional televised address, broadcast across many networks, that she made after attending Lashkarava’s funeral.

She also had a pointed message for priests and ultraconservative groups: “As for you, people with beards or no beards, with headdresses or no headdress, a day will come when they break into your house, when they trample on your rights, when you will want to speak but there will be no journalists around, no media outlets where you can go and speak about your violated rights.”