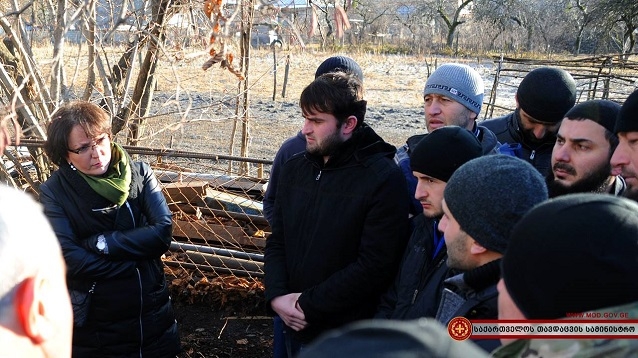 Georgia's government is pushing to get more military recruits from the Pankisi Gorge, a region that has recently been known more for sending Islamist militants to fight in Syria.

The Georgian Ministry of Defense announced on Monday that it had signed up 33 youths from Pankisi to join the military after a substantial government outreach effort. That effort included military representatives spending two weeks in the remote region recruiting, and a visit by Defense Minister Tinatin Khidasheli, where she assured residents that they would be able to pray, celebrate religious holidays and eat halal food. "I’m sure that people have much more information about the Georgian Army in Pankisi at this moment and the next call-up will have a better outcome,” Khidasheli said Monday in announcing the recruiting haul.

The Pankisi Gorge, about 160 kilometers northeast of Tbilisi, is populated largely by Kists, a Muslim group related to the Chechens and Ingush across the border in the Russian North Caucasus. The region's most famous son, at the moment, is Tarkhan Batirashvili, better known as Omar al-Shishani, a senior commander of ISIS in Syria. Before that, it was the focus of the United States's first serious training-and-equipping effort in Georgia, when in the early days of the War on Terror American soldiers helped drill Georgians to "operate in Pankisi-like conditions."

The growing reputation of the region as a hotbed for ISIS recruiting, while likely overblown, has made Tbilisi vulnerable: in January, Russian Foreign Minister Sergey Lavrov said that ISIS was using Pankisi as a sort of rear base. And there have been credible allegations that Tbilisi has actually trained Pankisi natives as irregular Islamist militias to fight Russia in Chechnya.

Batirashvili served in the Georgian military, and fought with distinction in the 2008 war against Russia over South Ossetia. But he says that after he contracted tuberculosis he was dismissed from the military rather than treated.

"Other Kists have variously lodged similar complaints -- that they had joined and served well but were discarded when they were no longer useful. This is part of the broader Kist narrative towards Tbilisi: that successive Georgian governments make promises, such as ahead of elections, but rarely keep them," Cecire said in an email interview with The Bug Pit.

But this new military recruitment drive is part of a larger effort to integrate the residents of Pankisi into Georgian society, Cecire said. This new push began last year, but the MoD recruitment effort was likely accelerated by Lavrov's comments, Cecire said. "There's a broader Kist integration effort going on. Even before Lavrov's comments, [former Prime Minister Irakli] Gharibashvili went and [President Giorgi] Margvelashvili's staffers went and there have been some increased local and international projects," he said. "But I am sure Khidasheli's motivation was at least partially linked to the Lavrov comments."

Nevertheless, Tbilisi's efforts remain uneven, and efforts at outreach are accompanied by occasional heavy-handed shows of force to arrest suspected militants. "The problem has been that the counterterrorism in the Interior Ministry don't necessarily talk with everyone else, so when they send 100 spetznaz to roll up a couple of guys, it undoes a lot of goodwill," Cecire said.