Georgian Parliament returns, with EU conditions at the top of the agenda

The EU wants Georgia’s government and opposition to cooperate on passing key reforms. But persistent polarization makes that an uncertain prospect. 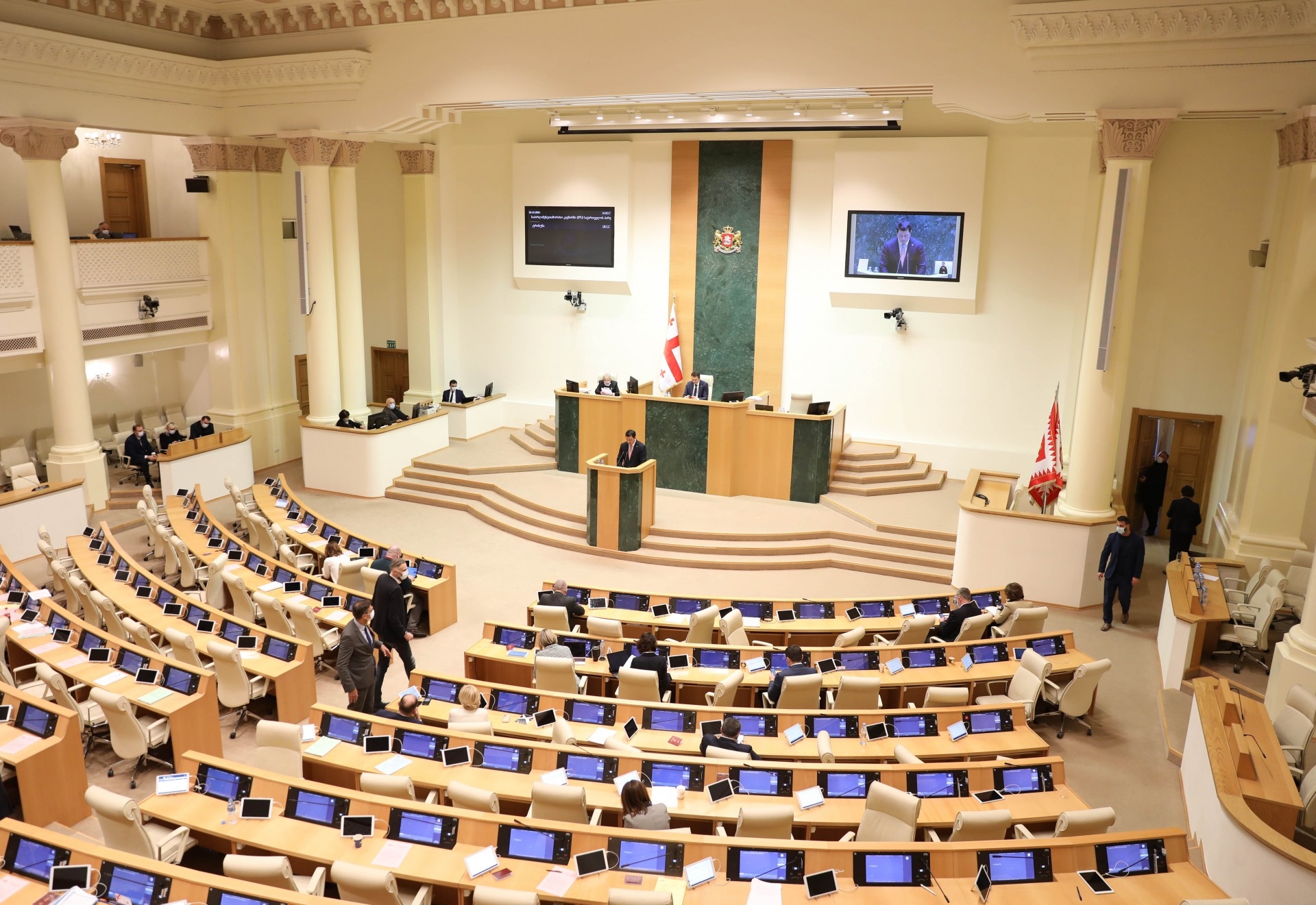 Georgia’s parliament has returned from vacation for its autumn session, and on the agenda will be some of the most consequential legislation the country has ever dealt with: reforms that the European Union says are needed for the country to become an official candidate for the bloc.

The session began on September 6, and deputies will start working in earnest on the tasks they were given by Brussels in June: demonstrate progress in 12 key areas, from judicial reform to stronger democratic oversight mechanisms to broader demands to depolarize and “deoligarchize” the country’s political system.

The ruling Georgian Dream party says it will have initiated all the relevant legislation to meet those demands by the middle of October, and plans to adopt them in hearings in November and December.

“We have laid out a concrete plan, concrete points and terms,” Georgian Dream chairman Irakli Kobakhidze told reporters on September 5. “Within the terms that we have suggested, we will ensure the fulfillment of each of the [12] points.”

The stakes are high: The EU has promised that if Georgia manages to satisfy the conditions within the next year, it will receive the long-coveted status of EU candidate. Georgia’s application to the EU was expedited due to Russia’s war in Ukraine, but Tbilisi suffered a setback when the EU granted immediate candidate status to fellow applicants Ukraine and Moldova while sending Georgia back to do additional work.

Behind-the-scenes work on the legislation began this summer, as Georgian Dream set up several working groups, along with representatives of the opposition and NGOs, to start to hash out what would need to be done.

But the process has already proved to be bumpy, demonstrating that the EU’s demand to reduce political polarization is going to be one of the most vexing. While Georgian Dream holds a commanding majority in parliament, allowing it to pass much legislation unilaterally, the EU asked that the process of carrying out the reforms be done in an inclusive fashion, bringing in the political opposition as well as key civil society groups.

That effort, however, inevitably ran into roadblocks. Some parties boycotted the working groups from the start. Georgian Dream then kicked out one NGO, election watchdog International Society for Fair Elections and Democracy, arguing that it was politically partisan. Several other NGOs then dropped out in protest.

Meanwhile, the parties that boycotted – including United National Movement, Lelo for Georgia and Strategy Agmashenebeli – started a parallel effort to come up with their own legislation to meet the EU conditions, claiming that Georgian Dream is deliberately sabotaging the process.

“What Georgian Dream is doing is an anti-European process, with the aim that the EU will somehow deliver the final rejection,” Strategy Agmashenebeli leader Giorgi Vashadze told reporters on September 3.

More recently, though, there have been signs that both the ruling party and some of the opposition forces are willing to compromise.

“While presenting our projects to Georgian Dream we are not going to be stubborn or uncooperative as the government often tends to be, but rather flexible,” David Usupashvili, a deputy from Lelo for Georgia party, told reporters on September 5, asked about the prospects of cooperation with the ruling party on reforms.

Georgian Dream, too, has said it is reconsidering a key reform on the election of the country’s chief prosecutor. On September 1, Kobakhidze announced that the party was introducing legislation to elect the prosecutor by a 3/5 rather than a simple majority, effectively allowing the opposition more of a voice in the selection.

That reform was part of the EU-brokered deal reached in April 2021 between the ruling party and the opposition, which later collapsed. Georgian Dream officials had previously derided the 3/5 proposal as “absurd,” but the EU raised the issue of election of the prosecutor in its conditions.

Kobakhidze said the party had resurrected the reform purely for the sake of the EU.

“This bill has no analog in any country of the world. This has a simple reason - its contents contradict the logic of governance and elementary legal principles,” he said on September 1. “But since it is our special priority to fulfill the 12 points set out by the European Union, as an exception, we will ignore legal principles this one time.”

The largest opposition party, United National Movement, has meanwhile taken a more uncompromising stance: it has called for early elections, arguing that the current government is incapable of carrying out the EU’s demands.

“We have no time to lose, the present window of opportunity may close soon and we are all responsible for that,” party chairman Nika Melia said during a September 5 press briefing. “In order to defuse the current political crisis, early elections need to be called in Georgia. All our efforts, actions, and activities will be directed towards achieving this goal.”

Other opposition parties have taken a dim view of that suggestion, arguing that the current electoral system gives an advantage to the ruling party. They have suggested that in exchange for their support for the prosecutor bill, they want reforms of the electoral system. (Passing the prosecutor bill would require a 3/4 majority, which will require some votes from the opposition.)

“What is the outlook for early elections without constitutional changes?” Usupashvili told Palitranews after the UNM’s announcement.

Another venue for likely compromise is the upcoming election of a new human rights ombudsman; the term of the current officeholder ends in November. The EU’s conditions include the selection of an “independent person” as ombudsman, and while Georgian Dream has promised not to name its own figure and introduced a new means of nominating a candidate, many still fear that the party may rig the process.

But as with the selection of the prosecutor, Georgian Dream will need some opposition votes.

“As per the constitution, this issue requires reaching a multi-party consensus,” Kobakhidze said in July. “We should select candidates that will be equally acceptable for the [ruling party] majority as well as the opposition.”