Protesters are demanding the resignation of the interior minister, but he may be too indispensable to the real power in the country: Georgian Dream chairman Bidzina Ivanishvili. 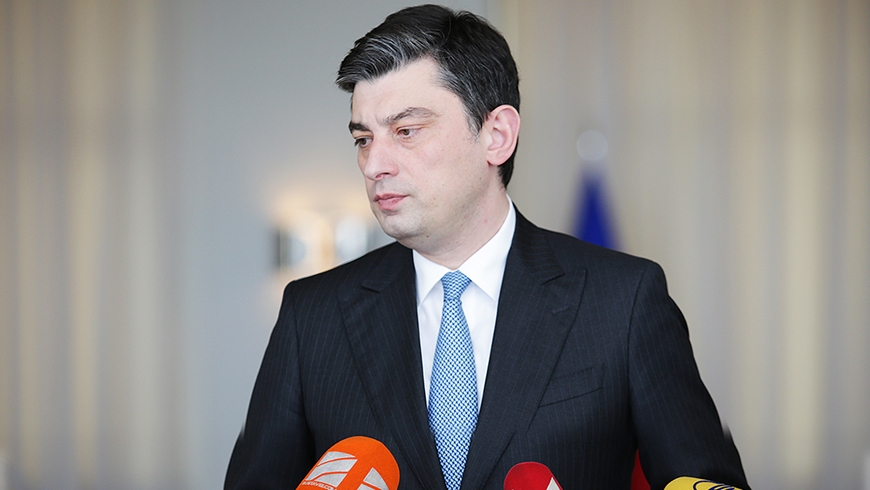 After seven days of rallying in front of Georgian Parliament, protesters are taking their demonstration to the odd, glassy mansion where billionaire Bidzina Ivanishvili and the country’s real political power reside.

Protesters believe that it is ultimately up to Ivanishvili, the chair and wallet of the governing Georgian Dream party, to meet their key demand: the dismissal of Interior Minister Giorgi Gakharia, whom they hold responsible for the police excesses during the violent breakup of the first day of the demonstration on June 20.

Heads have rolled as a result of the crisis: Speaker of Parliament Irakli Kobakhidze stepped down, and Georgian Dream lawmaker Zakaria Kutsnashvili quit the parliament altogether. But many observers see Ivanishvili’s governance playbook as premised on installing individuals of little political consequence as presidents, prime ministers and parliament speakers only to scapegoat them in times of crisis. Kobakhidze and Kutsnashvili were widely seen as two such dispensable placeholders.

The interior minister, by contrast, is seen both as Ivanishvili’s confidante and the muscle of his government. Gakharia is the “backbone” of Ivanishvili’s government, said Kornely Kakachia, director of the Georgian Institute for Politics. “Ivanishvili has no other responsible executive and crisis manager that he trusts.”

"Traditionally, the Interior Ministry has been the most powerful in Georgia, the 'mainstay' of the political leadership,” said Giorgi Mchedlishvili, a political analyst and associate professor at the International Black Sea University. "This is actually one of the reasons the protesters' demand specifically his head, and not that of the prime minister or the Minister of State Security."

Gakharia justified use of force in an extensive, live interview late on June 27. “You can’t have people’s trials and bullying of public institutions,” he said, while admitting that there might have been cases when police officers used unjustified force, meriting an investigation. “If the investigation into the dispersal reveals systemic problems, I’m ready to bear full responsibility.”

The tensions have brought to the fore the peculiar nature of Georgia’s power structure, based on officials and institutions’ loyalty to the nation’s richest man, Ivanishvili. Critics charge that it was this arrangement that brought Georgia to its current juncture: the lack of an institutional chain of command, or checks and balances, led to a situation in which first a Russian lawmaker appeared presiding over a meeting in the Georgian parliament and then the authorities mishandled the ensuing public outrage.

Human rights and good governance watchdogs said that the authorities failed to provide an “adequate” and timely reaction to the brewing scandal over the Russian lawmakers’ visit to the Georgian Parliament. “The inaction on behalf of the government” aggravated protesters, the groups said in a collective statement.

Government offices and officials were reportedly waiting for an executive order from Ivanishvili, who was discussing the preferred course of actions with his advisers. “Democracy is about institutional independence,” said commentator Jaba Devdariani. “You know you have a problem when the institutions that are supposed to be mutually accountable stop showing vital signs during the crisis and then spur into a concerted and targeted action when, one can only assume, a certain monarch comes out of shock.”

This concerted action is now focused on a single lawmaker, Nika Melia of the United National Movement (UNM) party, GD’s primary antagonist. Five days into the protests, the Prosecutor’s Office requested the parliament to waive Melia’s immunity to try him on charges of instigating riots in front of the parliament building in the first days of rallies. On July 26, the GD-dominated parliament revoked Melia’s immunity with a vote of 91 to 0. Melia was released on bail on June 27, pending trial.

Some Georgians do blame the UNM and other opposition groups for inciting violence. “[T]he situation was further escalated due to a number of political leaders calling on the protestors to seize and occupy the parliament and other government buildings,” the watchdogs said. But they believe that the ultimate responsibility rests with the authorities and the interior minister in particular, describing the riot police’s response as disproportionate, unreasonably brutal and going far beyond legal norms. Hundreds suffered injuries and several were maimed during the violent dispersal. When using rubber bullets, several riot police officers were seen deliberately aiming at protesters’ faces.

So far, the only real concession Georgian Dream made to protesters was to agree to the demand to democratize electoral system – the proposal was voiced by Ivanishvili himself – but the party’s chairman clings to the interior ministry despite widespread calls for Gakharia’s dismissal.

"[To]day, as the fortunes of the Georgian Dream have been shaken, and the de-facto leader Ivanishvili views himself and his own party as a besieged fortress, having a strong and loyal interior minister is key for political survival, as well as ensuring that there are security guarantees for him and his business after a very likely 2020 electoral defeat,” Mchedlishvili said.

“He knows that if he lets go of Gakharia, he could be next in line,” Kakachia said.

If it comes to that, Ivanishvili does have a fabled helicopter pad at his mansion that he can put to use.