She used her first-ever veto to try to block a controversial surveillance bill as the government blusters in its response to criticism from Europe. 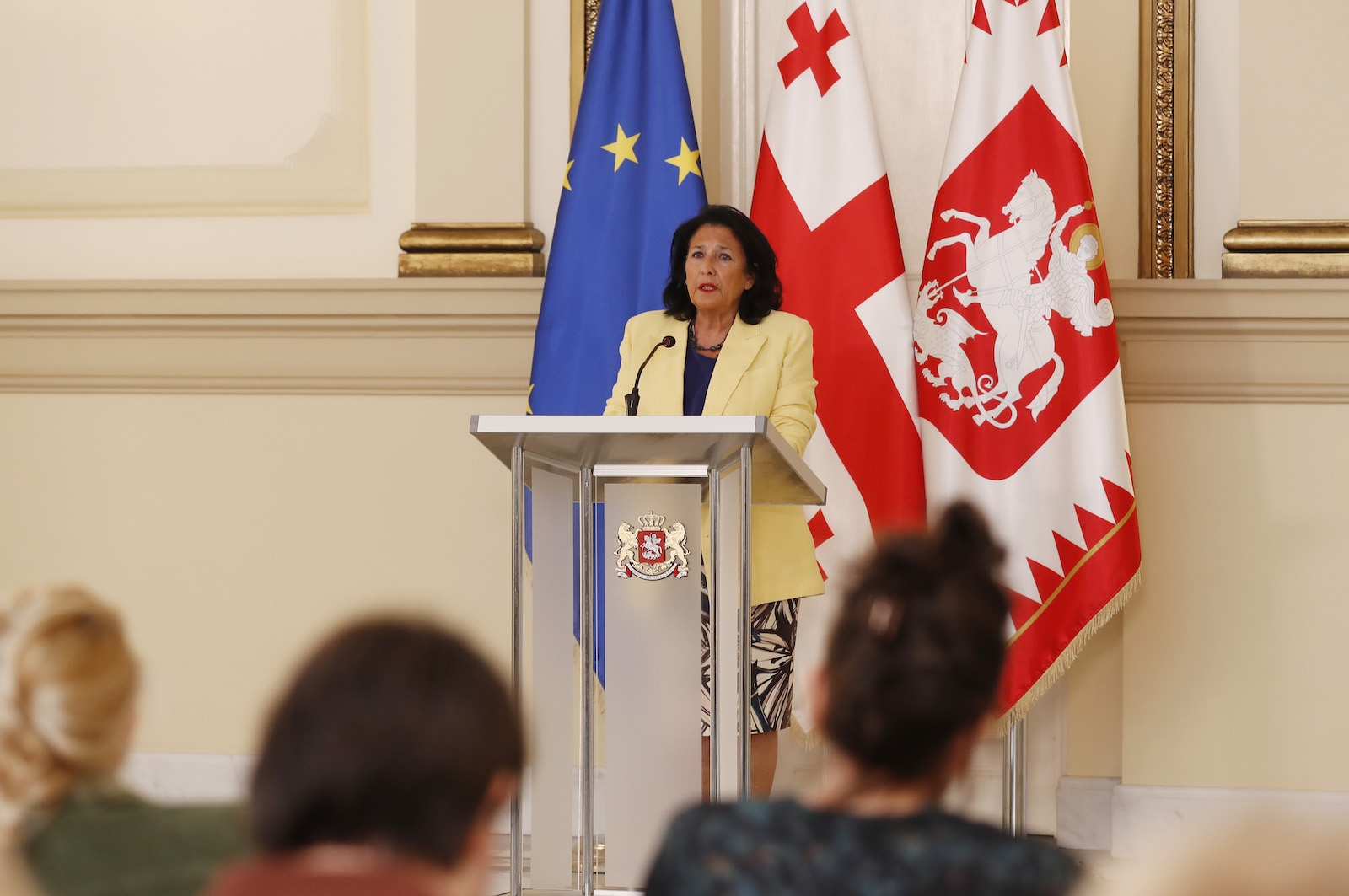 Georgia’s president has for the first time used her veto, against a controversial surveillance bill backed by the ruling party, citing the need to boost the country’s chances of gaining candidate status in the European Union.

President Salome Zourabichvili announced on June 22 that she had vetoed a bill that would extend the scope of state surveillance.

“I will veto every bill which will be adopted in the wrong direction in the coming six months,” Zourabichvili told reporters, referring to the period after which the European Commission is expected to revisit its recommendation last week to offer Georgia EU candidate status only after the country had fulfilled several conditions.

“Because in these days no law can be adopted in Georgia that would further restrict human rights, when we are asked to give more guarantees in this direction, to be more democratic and more European,” she added.

The veto marks another milestone in Zourabichvili’s growing estrangement with the ruling Georgian Dream party, under whose rule Georgia has gone from EU frontrunner among the so-called Associated Trio – including Ukraine and Moldova – to being recommended for a lesser status than those two countries in last week’s landmark announcement.

It suggests that she intends to take a still stronger role in forcing Georgia to adhere to its commitments to the EU, as the government gives mixed signals in the face of Brussels’s demands.

In its June 17 opinion on Georgia’s membership application, the European Commission cited surveillance practices as one issue of concern.

"Respect for privacy of communications has been put into question by eavesdropping and illicit surveillance of politicians, journalists, civil society activists and the diplomatic community, including tapes of private life and correspondence,” the commission wrote.

The Georgian Dream-dominated parliament on June 7 passed amendments to the country’s criminal proceedings code extending the number of crimes for which investigations can use covert surveillance techniques, and for how long they can be used.

The amendments would “significantly reduce Georgian citizens’ right to privacy, without providing sufficient safeguards against unjustified intrusion into their private lives and the protection of their personal data,” Hartzell said in a June 8 statement.

The amendments also follow a 2021 surveillance scandal, when a massive leak of security service files suggested that the Georgian government had been systematically eavesdropping on conversations of the clergy, media, and foreign diplomats, among others.

Georgian Dream needs only a simple majority to override the veto of the surveillance bill, something party members have already indicated they will do. But Zourabichvili said the symbolism was important: “I veto because this must be a sign that I disagree.”

Georgia applied for EU membership early in March, along with Ukraine and Moldova, in the wake of Russia’s invasion of Ukraine. But its application appears to have suffered from the dramatic political polarization and noticeable democratic backsliding the country has seen in the past several years.

But on June 17 the European Commission recommended that Georgia be awarded candidate status only after meeting a number of conditions, including democratic reforms and a reduction in political polarization.

The leaders of the EU countries are expected to follow the commission’s recommendations when they convene for a final verdict on June 23-24.

The commission’s announcement helped spur tens of thousands of Georgians to attend a June 20 Tbilisi rally to show their desire to join the EU and to express their discontent with the government that many blame for blowing Georgia’s unexpected opportunity.

Zourabichvili, whom Georgian Dream endorsed when she ran for president as an independent candidate in 2018, has grown increasingly critical of the party over the past year.

The divisions grew more apparent following the launch of the Ukraine war, as she more openly criticized Russia, in contrast to the ruling party’s more cautious stance. And her opposition has further sharpened as a result of the botched EU accession efforts.

In early June, the Georgian government even filed a claim against the president in the constitutional court for overstepping her duties by allegedly refusing to appoint government-nominated ambassadors.

But until now, Zourabichvili had refrained from using her veto on controversial bills in spite of repeated calls from advocacy groups to do so.

Her hand may have been forced, however, by the post-announcement actions of the ruling party and the opposition, who have continued to bicker bitterly in the face of the EU’s calls to reduce polarization.

“I am fully concerned by what I have heard today in parliament,” the president said, referring to the angry exchanges in the Georgian parliament earlier in the day between Prime Minister Irakli Garibashvili and opposition deputies.

And he said that Ukraine and even Moldova got a leg up because they were more directly affected by the war. “Moldova is also perceived to be in a war-like situation since it is a [Ukraine-]bordering country,” he said.

The address was repeatedly interrupted by loud disapproving remarks from opposition deputies attending the session. Garibashvili shot back that several of them needed to seek medical treatment and called them “traitors” because, he claimed, they tried to undermine the country’s EU chances.

“Don’t you have any medication, give it to them to calm them down,” he said. “Should we call a doctor?”

While Georgian Dream leaders have vowed to follow the European Commission’s recommendations on reforms, those reassurances have been undermined by officials’ continued confrontational rhetoric and the insistence that they were planning to carry out the reforms anyway.

“We are motivated to continue all those reforms that are necessary for our country, our people,” Garibashvili said in parliament. But he added that “a large part of the reforms was already envisaged in the [EU’s association agreement’s] agenda, which we have agreed with Brussels only a month ago.”

In her address, Zourabichvili called Garibashvil’s rhetoric “absurd and offensive” and criticized the authorities for failing to show the political will to fulfill the commission’s recommendations.

“[European leaders] were expecting from us one very simple thing, to express a political will – that we have read the recommendations, we will analyze it,” Zourabichvili said. “And that while it does not necessarily mean that we will accept everything as it is, we are ready to do all in our power together, in a non-polarized and non-confrontational way.”