Georgian President Stumps for More US Support, Details to Follow

Margvelashvili is lobbying for Congress to pass a Georgia Support Act, but no legislation has been drafted. 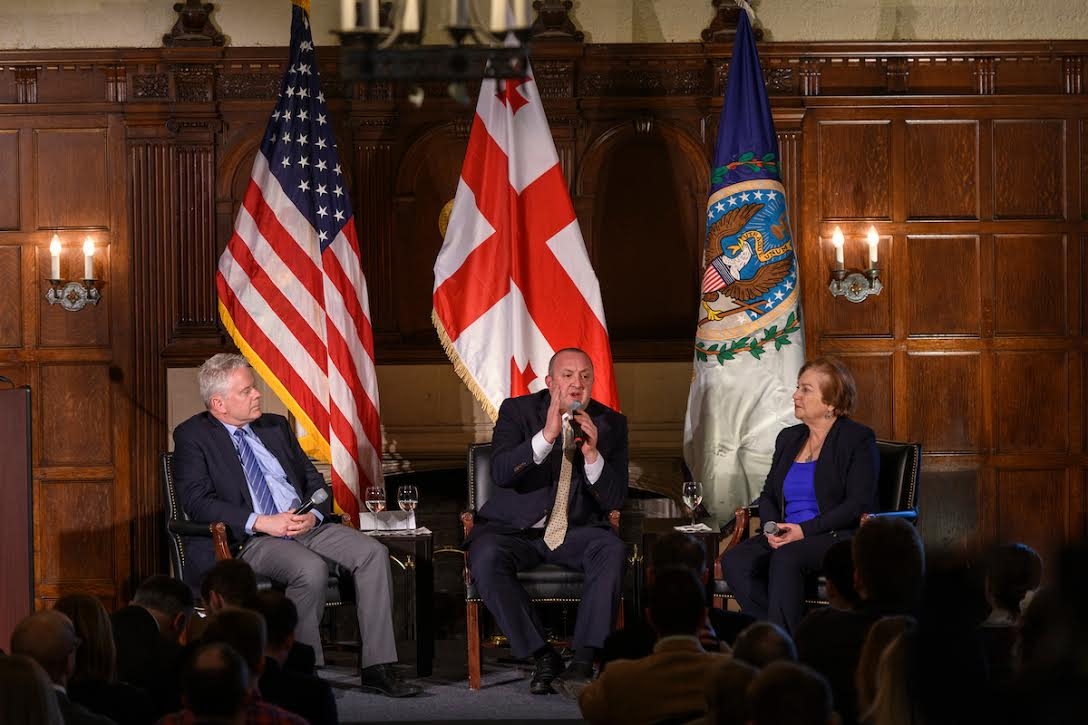 Georgian President Giorgi Margvelashvili speaks at Georgetown University during a recent trip to Washington, where he pitched the idea of a Georgia Support Act. (photo: Georgian Embassy, Washington)

On his recent visit to Washington, Georgian President Giorgi Margvelashvili took every opportunity to urge his American partners to pass the Georgia Support Act in the United States Congress.

The “Georgia Support Act will strengthen Georgia's status of the US special ally at the legislative level,” Margvelashvili told the audience at the Heritage Foundation. The act would be “the next logical step in backing and cementing” the strong relations the two countries already enjoy, he told members of Congress. Upon his return to Tbilisi, on March 20, he discussed the Act with US Ambassador Ian Kelly. “President Margvelashvili: Adoption of Georgia Support Act Is Crucial to Overcome Existing Challenges,” the official press release was headlined.

Curious observers who headed to Congress's website to find out the details of this new legislation, however, came up empty. Thus far, however, there is no Georgia Support Act. No member of Congress has proposed, or even drafted, such an act.

The idea is for now a placeholder for a general wish on Georgia's part to elevate its ties with the US, said one senior Georgian government official, speaking to Eurasianet on condition of anonymity because the idea is in its early stages.

“What exactly this will be and how the next level will be addressed, this needs to be discussed among our partners,” the official said. “We don't want to rush to conclusions about what the Georgia Support Act would address.” The official mentioned acts that Congress has passed with allies like Greece, Japan, Taiwan, South Korea, Israel, and Ukraine as possible models for the Georgia Support Act.

“Basically Georgia hopes to get special status with US during uncertain times,” said Kornely Kakachia, director of the Georgian Institute of Politics. “The act also is assumed to [represent] a long term commitment from its strategic partner.”

This wouldn't be the first time Georgia got this sort of symbolic gesture from Washington. In January 2009, in the waning days of the Bush administration, the US and Georgia signed a Charter on Strategic Partnership. That agreement, too, was billed as moving US-Georgian relations to a new level. “A new stage is beginning for Georgia's international relations by the signing of this agreement,” said the president at the time, Mikheil Saakashvili.

“The Georgians keep seeking out means of rediscovering their once lofty perch in Washington during the Bush administration; understandable, but I think they fail to appreciate that it was very much a different time with unique circumstances that are not likely to be replicated in the current environment,” said Michael Hikari Cecire, a Washington-based Georgia analyst at the Foreign Policy Research Institute. “I get the idea of trying to develop new vehicles to demonstrate, or at least invent, a sense of forward momentum, but I can't imagine that any passed legislation of this type would significantly alter the shape of bilateral relations, which are already quite strong.”

The senior official said the response in DC to Margvelashvili's lobbying was generally positive. Not yet known is whether any member of Congress will take up the task of writing the Act.