The United National Movement’s strong showing is a comeback of sorts for former president Mikheil Saakashvili, who still leads the opposition party from exile. 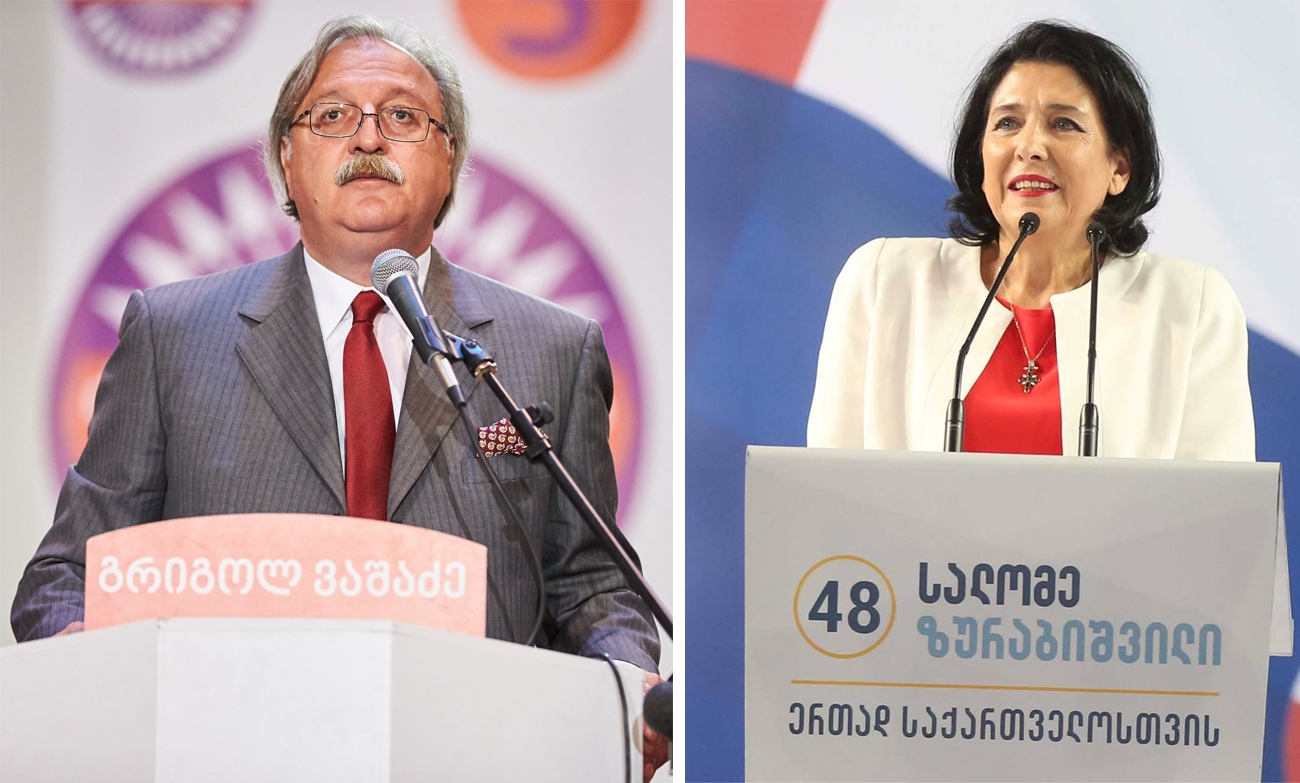 Georgia’s presidential election yesterday dealt an embarrassing setback to the ruling Georgian Dream party as its nominee barely edged past its main rival's candidate, who performed much better than expected. A runoff will be held in the coming weeks.

At an election-night party, Georgian Dream had wine and celebrity singers ready to fête its candidate, Salome Zourabichvili. Senior party officials began congratulating Zourabichvili when encouraging exit-poll results arrived, but the party’s pollsters turned out to be excessively optimistic.

With 38.6 percent of the votes, Zourabichvili finished neck-and-neck with her main rival, Grigol Vashadze of the United National Movement (UNM), who received 37.7 percent. Both failed to clear the required 50 percent threshold, as a clear anti-incumbency sentiment split votes among several opposition candidates.

Georgian Dream struggled to save face in its morning-after comments, but some members did acknowledge reality: Party member Roman Kakulia called the result “a slap in the face” for the party that has dominated Georgian politics for six years under the leadership of the nation’s richest man, Bidzina Ivanishvili.

The two frontrunners – both former foreign ministers – are now bracing for a runoff, and it doesn't look good for Zourabichvili. The third-place finisher, with 11 percent of the vote, was Davit Bakradze, who asked his supporters to vote for Vashadze in the second round. Bakradze represented European Georgia, a UNM offshoot.

With little time left for Georgian Dream to rework its pitch, observers expect voters to lean towards the opposition in the second round. “So long as the opposition can mobilize their voters, it is reasonable to believe that Vashadze is in the lead at the moment,” Dustin Gilbreath, deputy research director at the Caucasus Research Resource Centers, told Eurasianet.

The outcome is seen as a defeat for the establishment, especially given Zourabichvili's status as the most well-heeled contender in the race. She received 3.1 million lari ($1.5 million) in donations – more than double the amount raised by the five top opposition candidates combined – and, on top of that, a million-lari loan from an Ivanishvili-connected bank. “A substantial imbalance in donations and excessively high spending limits […] contributed to an unlevel playing field,” along with other campaign violations, an election-monitoring mission from the Organization for Security and Cooperation in Europe (OSCE) said in its initial assessment.

Opposition parties claimed that Georgian Dream activists bribed voters. The OSCE mission did note instances of “misuse of state resources” and that “the involvement of senior state officials from the ruling party in campaigning was not always in line with the law,” but said that ultimately Georgians had a “genuine choice.”

Some analysts say that the election reflected disenchantment with the pace of economic growth, as voters expected the billionaire Ivanishvili’s personal wealth and business acumen to translate into economic prosperity for Georgia in the six years since his party took power. Beyond that, the vote spoke to the irritation many Georgians feel about Ivanishvili's dominance of the country's politics, said Sopho Bukia, the Georgia editor of the online news site Jam-News. “The voters punished Ivanishvili and told him he will not be able to do whatever he wants, whenever he wants,” Bukia told Eurasianet.

Analysts said that Georgian Dream miscalculated by going along with Ivanishvili's pick, Zourabichvili, in spite of warnings by its own dissenting members. The French-born Zourabichvili rubbed many voters the wrong way for her perceived arrogance, poor grasp of the Georgian language and a variety of political blunders. “She proved alien and unappealing to many voters,” Bukia said.

Adding to her woes, a month before the election the government introduced a bill that would authorize the export of cannabis in what was widely seen as an eccentric whim by – and money-making scheme for – Ivanishvili. The plan roiled culturally conservative Georgians and offered grist for attacks from the UNM.

“Ivanishvili’s personal choices cost him this election,” independent commentator Jaba Devdariani told Eurasianet. “The nomination of Zourabichvili […] and the ill-advised attempt to push through medical-marijuana cultivation during the election campaign were Ivanishvili’s choices.”

The election also marked a comeback of sorts for former President Mikheil Saakashvili, who serves as leader of the UNM from his exile in the Netherlands. Saakashvili is wanted in Georgia on multiple charges that he dismisses as Ivanishvili’s vendetta. “This election showed that we still have two informal leaders,” Bukia said, referring to Ivanishvili and Saakashvili. “They both personally selected election candidates and […] this time, Saakashvili won.”

With this, Georgia is back at square one: the Ivanishvili-Saakashvili rivalry for leadership that began in 2012 when the president lost to the billionaire in a landmark parliamentary election. Now the two are expected to clash again during the next parliamentary vote, in two years. Because the president only has ceremonial powers, this year’s election is seen as a warmup for 2020.

Victory in the presidential election would inspire UNM to rally for the parliamentary race. For Georgian Dream, defeat would exacerbate internal divisions, said Davit Usupashvili, a former leader of the Republican Party, who also ran for president and finished a distant fifth. “The end of the presidential election will be the start of parliamentary election,” he told Rustavi2 television.