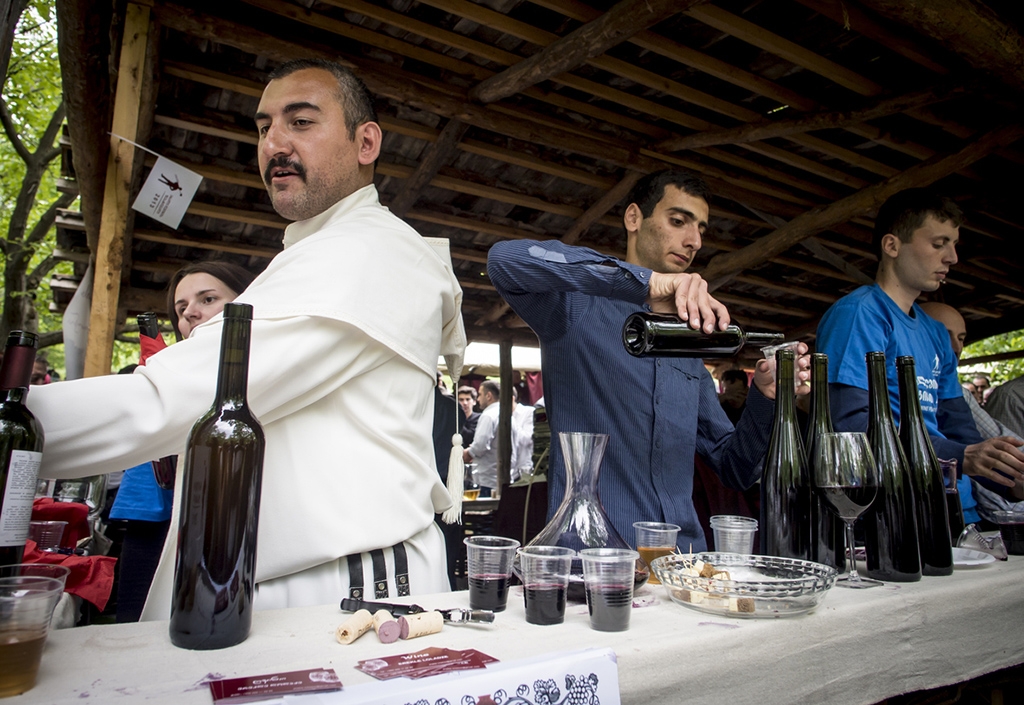 Traumatic memories of the 2006 embargo provide a strong incentive for vintners and distributors to lower Russia’s export share. (iStock)

The Georgian wine industry, gutted by a Russian embargo 15 years ago, is thriving once again. But success is resting on a shaky foundation. While exports reached record levels in 2021, roughly 55 percent went to Russia, giving the Kremlin potential leverage to use wine again as an economic weapon.

The Georgian National Wine Agency reported 13.8 percent growth for wine export volume during 2021, with more than 100 million bottles distributed abroad by over 420 companies. Export revenue reached $239 million, a 5.6 percent jump over 2020. Most encouragingly for producers, exports increased significantly to the United Kingdom and United States, and broke into new Western markets, including Canada, Czechia and Sweden.

But the data still show that Georgian wine exports are stubbornly dependent on the Russian market. Among the top five nations that consume Georgian wines, Russia accounts for more than double the volume of the next four (Ukraine, Poland, China and Belarus) combined.

The Russia-heavy numbers are not creating an attractive bouquet for the government. The Wine Agency, which operates under Georgia’s Ministry of Environmental Protection and Agriculture, is pressing ahead with a plan approved in September to help producers and distributors expand existing markets in the West and Asia, as well as find new markets. It focuses on developing exporters’ marketing skills, providing co-financing for marketing campaigns that are aimed at boosting exports outside the post-Soviet Commonwealth of Independent States (CIS). The government will also incentivize the expansion of producers’ export capacity with improvements in processing, packaging and shipping logistics.

"Given the private sector's logistical, geographical, or historical experience, it is easier for them to conduct marketing activities in the CIS. This is understandable. But I think the time has come for [domestic wine producers] to take more risks in the direction of Western markets," Levan Mekhuzla, the Wine Agency’s head, told Eurasianet.

Reducing Georgia’s export dependency on Russia is a prudent hedge against economic bullying, said Tamta Shvangiradze, an economics professor at the Kutaisi International University. “Russia can close the market anytime.”

Russia first engaged in wine warfare in 2006, imposing a ban on Georgian vintages that sent the industry into a tailspin. The embargo was part of Russian leader Vladimir Putin’s strategy to thwart then-president Mikheil Saakashvili’s efforts to integrate Georgia into Western security and economic structures. Their mutual animosity eventually led to a brief war in 2008, in which Georgian forces were routed. Russian troops continue to occupy large swaths of Georgian territory to this day. Another bout of tension erupted in 2019, prompting Russia again to threaten economic retaliation.

Traumatic memories of the 2006 embargo provide a strong incentive for vintners and distributors to lower Russia’s export share. Prior to the embargo, Russia accounted for about a 75 percent share of exports, which in 2004 generated $48 million in overall sales. In 2007, the Russian market share went to zero. Mikheil Kobaladze, sales manager of Tbilvino, a leading producer, recalled that the embargo pushed the industry to the brink of collapse. "The imposition of an embargo by Russia was, of course, a big blow for us,” he said. “About half of Tbilvino's sales were coming from Russia at the time, and the company was faced with a life-changing challenge.”

But the embargo also had benefits: It forced producers to make quick improvements in the quality of their wines and to start paying more attention to marketing.

Keti Jurkhadze, a Tbilisi wine expert, said the embargo encouraged a transformation of the industry, including the proliferation of small wineries. “The strict control of wine quality began” after 2006, she said. “Georgians love to prove that they can do something, and this [the embargo] led to an increase in wine quality.” The improved quality facilitated sales in what were then new markets: the U.S., western Europe and China.

Some firms were able to make the transition faster than others. Tbilvino managed to reorient its exports and reach its pre-embargo export level within “about a year,” Kobaladze said. But many producers struggled.

Export volume returned to pre-embargo levels only in 2013, the same year that Russia lifted its restrictions. At that time, and over ensuing years, Georgian exporters fell back into old habits, achieving growth mainly by expanding shipments to Russia. In 2013, Russian accounted for 44 percent of the $128 million in total wine exports. The Russian share has since risen, to 55 percent in 2021.

The trend has hindered the industry’s development, Jurkhadze asserted. Most of the Georgian wine exported to Russia is mass-produced, less complex and low cost. Catering to the Russian market hinders many producers from achieving growth in more lucrative markets elsewhere, where high-quality vintages are in demand, Jurkhadze said.

"When exporting to Russia, we have to produce the kind of wine that the local market wants and not to show the character and qualities that Georgian wine has,” she said. “The fact that low-quality wine is exported to Russia is the customer's fault. They [buyers] come to a company and tell them, ‘I like your luxurious bottle, but pour me cheap wine because my market [wants] it,’”

Kobaladze of Tbilvino said the company is focusing on developing its higher-end wines. Given the continuing risks of potential Russian-government punitive measures, he added, the firm is careful to keep the Russian share to about one-fifth of its overall exports.

“We export wine to more countries now than in 2006, but it’s still not enough. Georgian producers have to try harder to lower dependence on Russia,” said Shvangiradze, the economics professor.