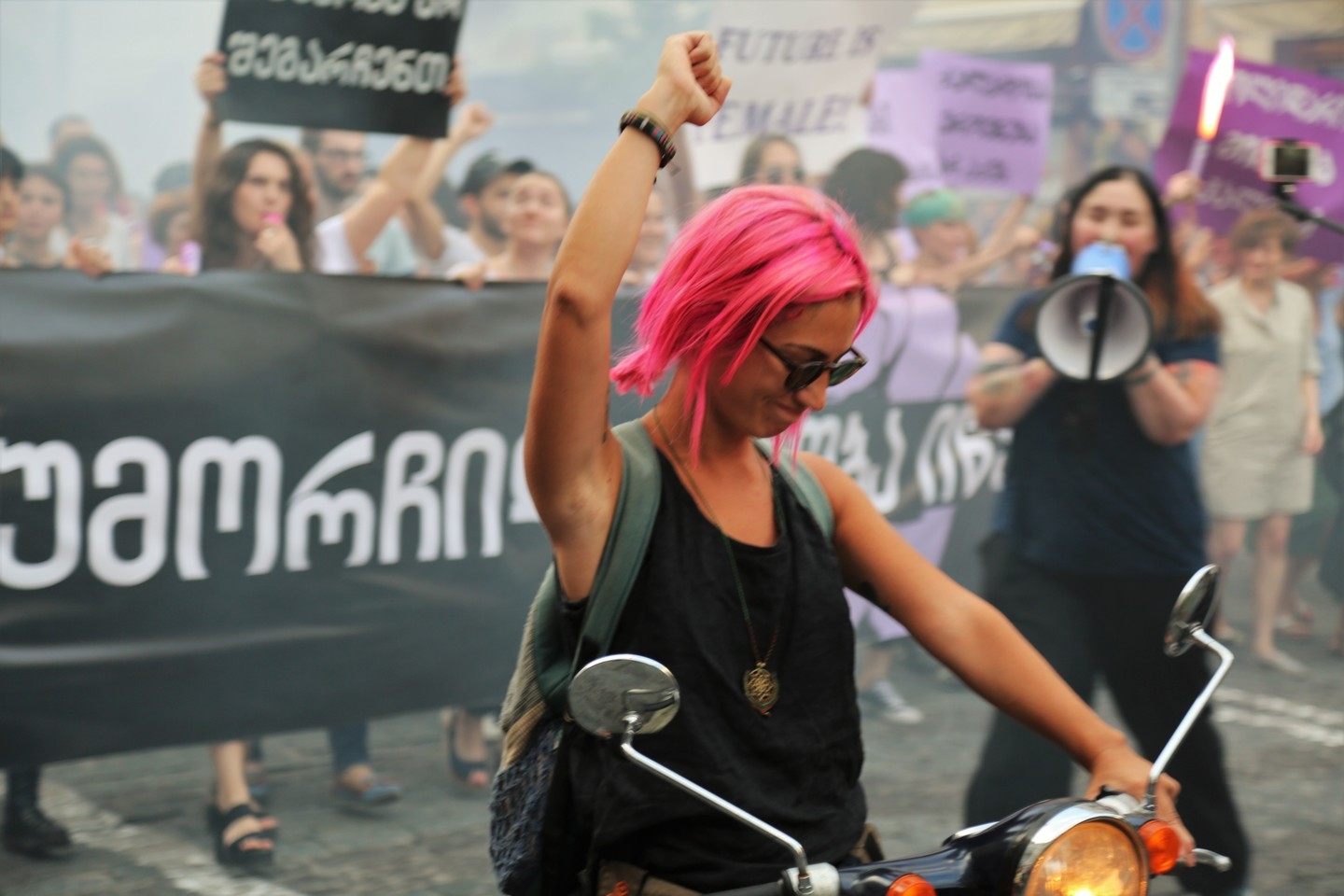 Two participants in the July 19 Women's Solidarity March in Tbilisi rode ahead of the crowd on mopeds. 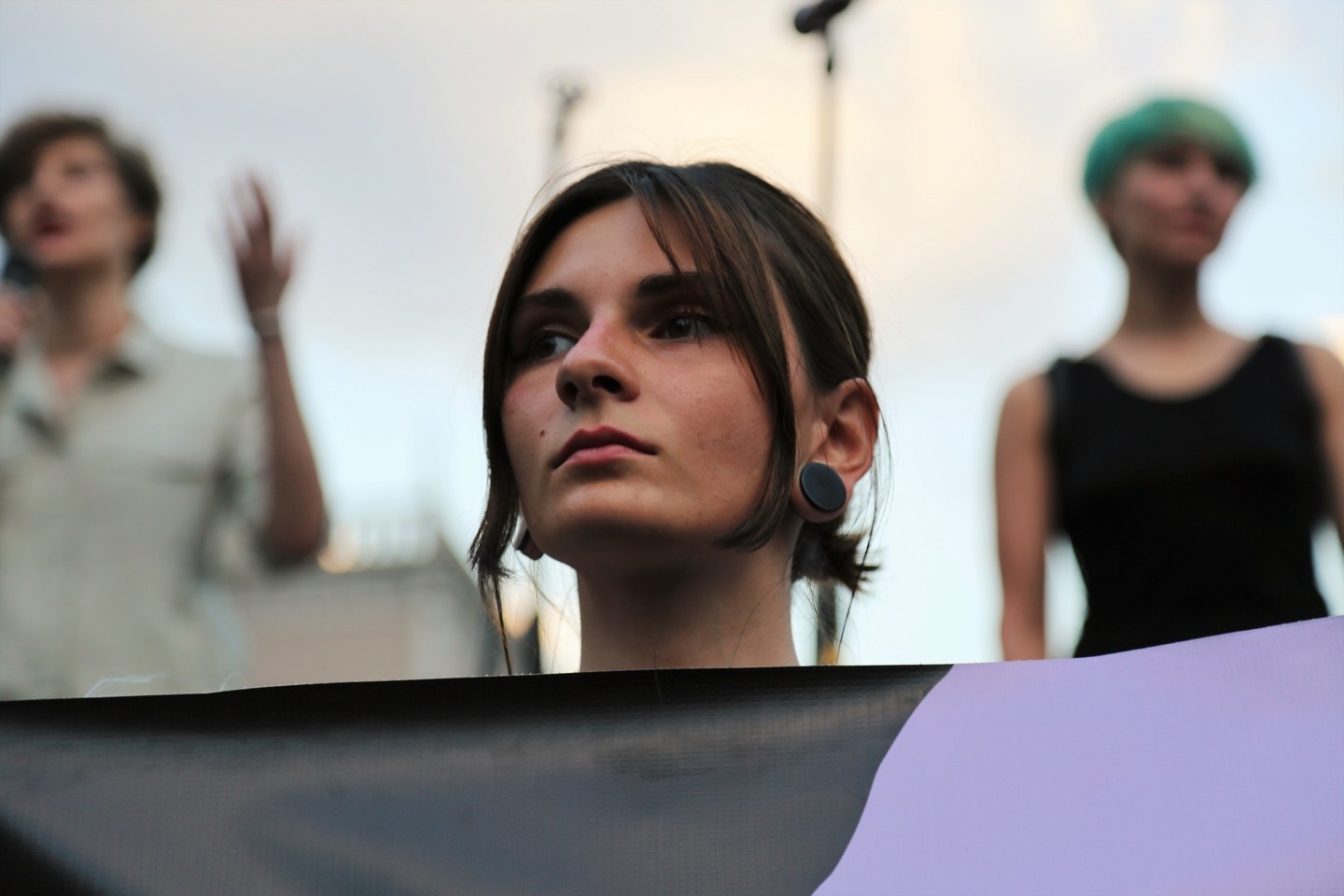 Women gathered on Tbilisi's Marjanishvili Square to protest the xenophobia and sexism linked to an earlier rally on the square. 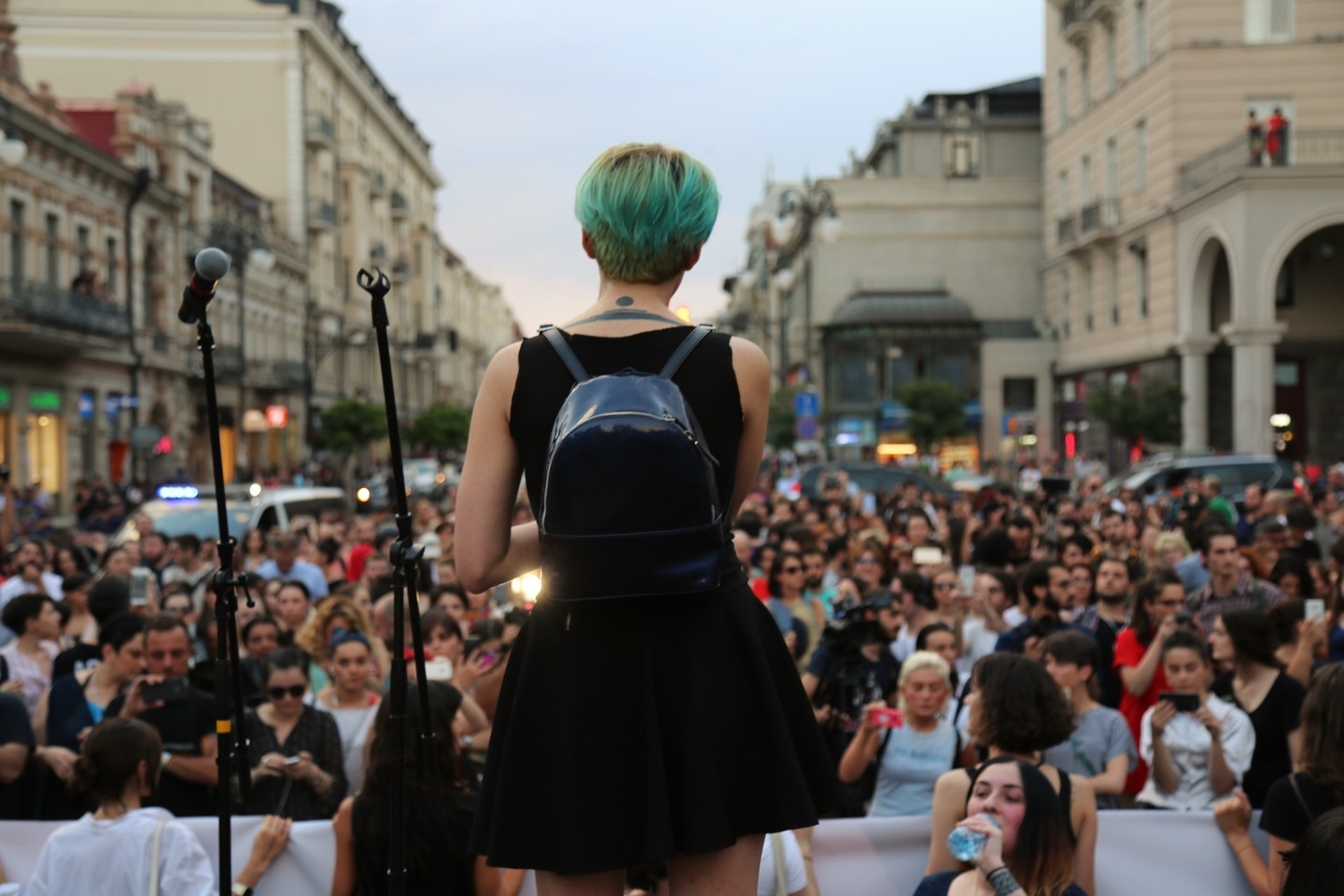 Turnout at the Women's Solidarity March, a last-minute combo of protests against an ultranationalist rally, was modest. 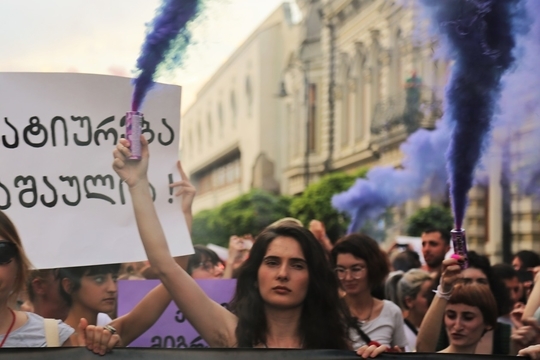 View full-size Some local critics have assailed the demonstrators, here proclaiming "Women's Disobedience Begins," as "not real women."
prev
next

An ethnically diverse historic neighborhood in Tbilisi has become the battlefield for an ongoing cultural war in Georgia over minorities’ rights, with two demonstrations – one by ultranationalists, the second against them --  pounding the pavement of the district’s central Aghmashenebeli Avenue in the space of four days.

Chanting “Women’s disobedience begins!,” scores of female protesters marched down the avenue on July 19 to oppose the misogyny, racism and an alleged gang-rape threat that emanated from last week’s March of Georgians, a protest that primarily targeted migration by Muslims from the Middle East.

“We are here to condemn the harrowing attitude toward women expressed by participants of the so-called March of Georgians and also to express our support for foreigners living in Georgia,” said Rusiko Amirejibi, a rally participant and linguist who has taught Georgian as a foreign language.

“I am also supporting not just legal, but also illegal immigrants, who sought refuge or a better life in Georgia, and are living here peacefully and are not committing a crime.”

“Crime has no nationality and it falls to the government, not to an angry mob, to react to it,” she underlined.

Leaders of the July 14 March of Georgians had fired up anti-immigrant sentiments by citing alleged cases of sexual harassment of minors and desecration of an historical Christian landmark by arrivals from India and Islamic countries.

When University of Georgia lecturer Tatia Dolidze, prominent for a 2016 UN speech, criticized the ultranationalist rally as xenophobic, one of the event’s co-organizers, 57-year-old actor and singer Gia Korkotashvili, responded by commenting on Facebook that Dolidze “should be f --- ed.”

“I am too old for group things, so you guys go ahead,” he wrote to his interlocutors.

The police have started an investigation into the dialogue.

For participants in the Women’s Solidarity March, the ultranationalists’ remarks are part of a broader problem in Georgia.

“We would like to make society understand that these fascists, who claim to be defending Georgian culture, are, in fact, defending nothing but their prerogative to insult and subjugate women,” said free media and women’s rights activist Ninia Kakabadze.

Korkotashvili tried to defend his and his supporters’ inflammatory comments about Tatia Dolidze as a private, locker room-style chat. While crude, he claimed, it was not meant as an actual threat.

But Korkotashvili’s choice of words to explain that only added to the controversy.

“This was a private conversation between two people . . . and now the women are picking on it, saying that their bodies are not protected and someone intends to gang-rape them and all,” Korkotashvili told Obiektivi television. “You wish someone had such intentions for you,” he said to his female critics.

Feminist activists say that the comments encapsulate the problems of Georgia’s patriarchal society. “These are the men who raise toasts to women at supras [a traditional Georgian dinner party] , but see them as sexual and reproductive objects, whom they can punish, verbally or physically, at their whim,” Kakabadze commented.

The attitudes toward arrivals from Middle Eastern and Asian countries stem from the same sense of male entitlement, she charged.

RFE/RL journalist and popular commentator Salome Asatiani believes that the surge in nationalism and machismo is largely an attempt by those Georgian men who feel left out of today’s Georgia to reassure themselves.

“They feel that they don’t fit in the modern criteria of success -- they don’t speak English, can’t make money, so this whole we-are-the-real-men thing is a way to compensate and react,” she said.

Many policemen, who cordoned off the demonstration area, smiled and joked under their breath as their listened to the feminist slogans.

As the activists, joined by some men and a few transgender women strode along Aghmashenebeli, Middle Easterners working or living in the area looked on. Some could not figure out if the rally was against or in support of foreigners and retreated into shops and restaurants for safety.

“They told me that they came to support us, but I don’t understand why it is mostly women. Is this because Georgian men don’t like foreigners and Georgian women like them?” wondered a Tbilisi State Medical University student from Iraq.

Some Georgians living in the area who took part in the July 14 march sought to distance themselves from the leaders of the rally. “Those terrible things they said about that little girl [Dolidze] are shameful,” said an elderly woman, Nana, who refused to give her last name. “I am glad these people came out against those uncultured men. It will serve them well.”

Nana, however, defended her decision to join the ultranationalist rally. She said that she, like many other Georgians, feels existentially threatened by growing Arab, Iranian and Turkish presence in the neighborhood and, more broadly, in Georgia.

“We are a breed on the verge of extinction,” Nana said of ethnic Georgians. “Look, son, at all these shawarmas and what not, all these men in their robes and women covered from head to toe . . . Give it another 20 years and you won’t see a single Georgian here.”

Women’s Solidarity March participants maintain they will not leave unanswered manifestations of either ethnic bigotry or male chauvinism. “I’m not too hopeful that the change will come soon, but we will do our part to push for it,” Kakabadze said.