More than a fifth of Georgians have emigrated to seek work, a new study finds. That is furthering a labor shortage at home. 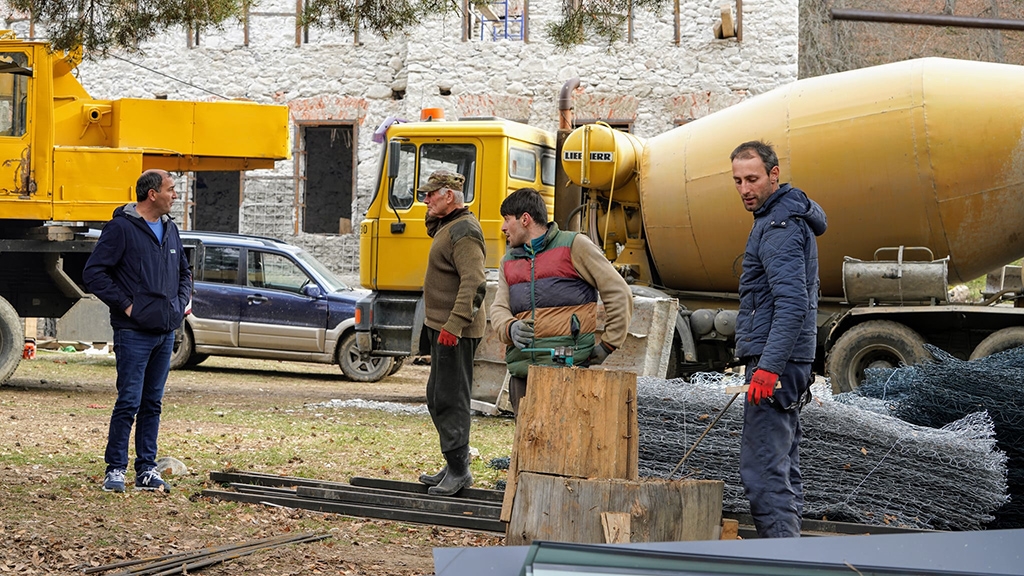 Georgian businesses are struggling to find workers, including in construction, even as the number of labor migrants rises. (government handout)

About 23 percent of Georgians currently live and work abroad, a new study has found, spotlighting how even decades after the collapse of the Soviet Union tens of thousands continue to flee economic hardship each year.

“Since the mid-1990s, Georgian migration patterns have been characterized as labor emigration driven by socio-economic challenges,” PMC said in its September 13 bulletin. “The significant proportion of Georgian labor emigrants reside and work illegally in their host country.”

Emigration fell after 2012 but the numbers started climbing again in 2018. Last year, 80,351 Georgian citizens left for at least six months, the state statistics agency says; net out-migration was the highest since 2014.

PMC notes that the uptick coincided with the European Union lifting its visa requirement for Georgian citizens in 2017. Since then, EU members have periodically complained about rising numbers of Georgians claiming political asylum and Georgians taking advantage of social services within the bloc. Georgian asylum requests saw a 173 percent increase in the first half of this year compared to 2021, the EU Agency for Asylum reported.

But it is still Russia that continues to top the destination list, hosting 450,000 Georgian migrants as of 2020 according to UN data, followed by Greece (85,000), Ukraine (65,000), and Azerbaijan (49,000). (Data is not yet available to indicate how Russia’s war in Ukraine has impacted the Georgian diaspora.)

The PMC study, however, identifies the United States, Italy and Armenia as seeing the biggest increase in Georgian arrivals since 2010.

These trends are not lost on the people left behind. Tales of emigration often feature in local media and public discussions, especially of women who have been forced by penury to seek work abroad. Most Georgians have heard personal stories of self-sacrifice, homesickness, and the heartbreak when a mother must leave children to make ends meet.

Amid generally poor labor conditions and the steadily increasing cost of living, more people – including the younger labor force – may be contemplating departure. Last year a survey by the Caucasus Research Resource Center, a think tank in Tbilisi, showed 12 percent of Georgians interested in emigrating permanently and 52 percent wishing to leave the country at least temporarily.

But while political elites have long acknowledged emigration as a social problem, there has been little government discourse on how to bring them home or encourage them to stay. Instead, authorities have sought to help Georgians gain legal employment abroad.

The reason is clear: Georgia’s economy is heavily dependent on remittances.

PMC says the total sum of remittances to Georgia grew 76 percent since 2012 and contributed the equivalent of 13 percent of GDP last year, landing the country at 23rd place in global remittance-to-GDP rankings. Moreover, the share of total remittances from the EU is increasing, comprising 41 percent of inflows compared to 27 percent from the post-Soviet space.

“Most notably, remittance inflows from the EU increased after the visa liberalization agreement was reached,” PMC said.

All this emigration may begin to drag down, rather than boost, the economy.

Georgian businesses are struggling to find workers, despite an official unemployment rate of over 18 percent. This is particularly true in construction and hospitality, including tourism – key growth drivers.

While business owners partly attribute the labor shortage to the pandemic, which forced staff to seek employment in other fields, some claim labor migration is also part of the problem.

“Many people have left Georgia for Lithuania, Latvia, Estonia, Poland, Qatar. Those who had worked with me and emigrated went to these countries,” Levan Kokiashvili, the founder of the Georgian Gastronomy Association, a trade group for restauranteurs, told Business Media Georgia in July. “The staff deficit logically led us to increase salaries.”

“Unfortunately, they [employees] still do not show up. As surprising as this may sound, the pay rise did not work much.