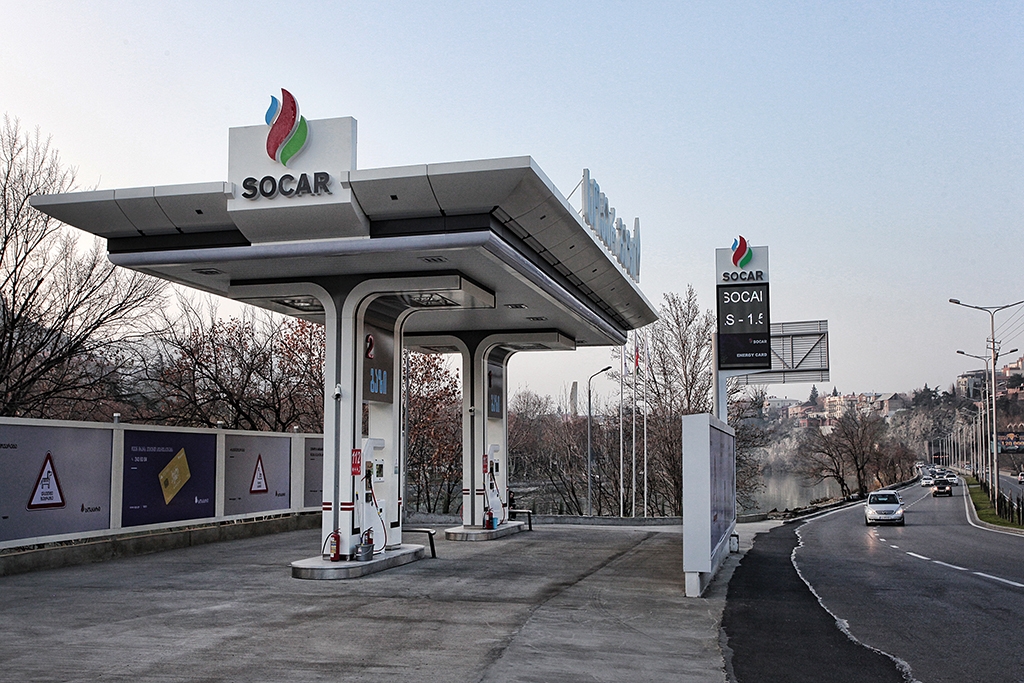 Early last month, a group of Azerbaijani and Georgian government officials gathered in Marneuli, in southern Georgia near the border with Azerbaijan. They were there to open an “Integration Center,” a sort of community center aimed at the area’s majority ethnic Azerbaijani population. 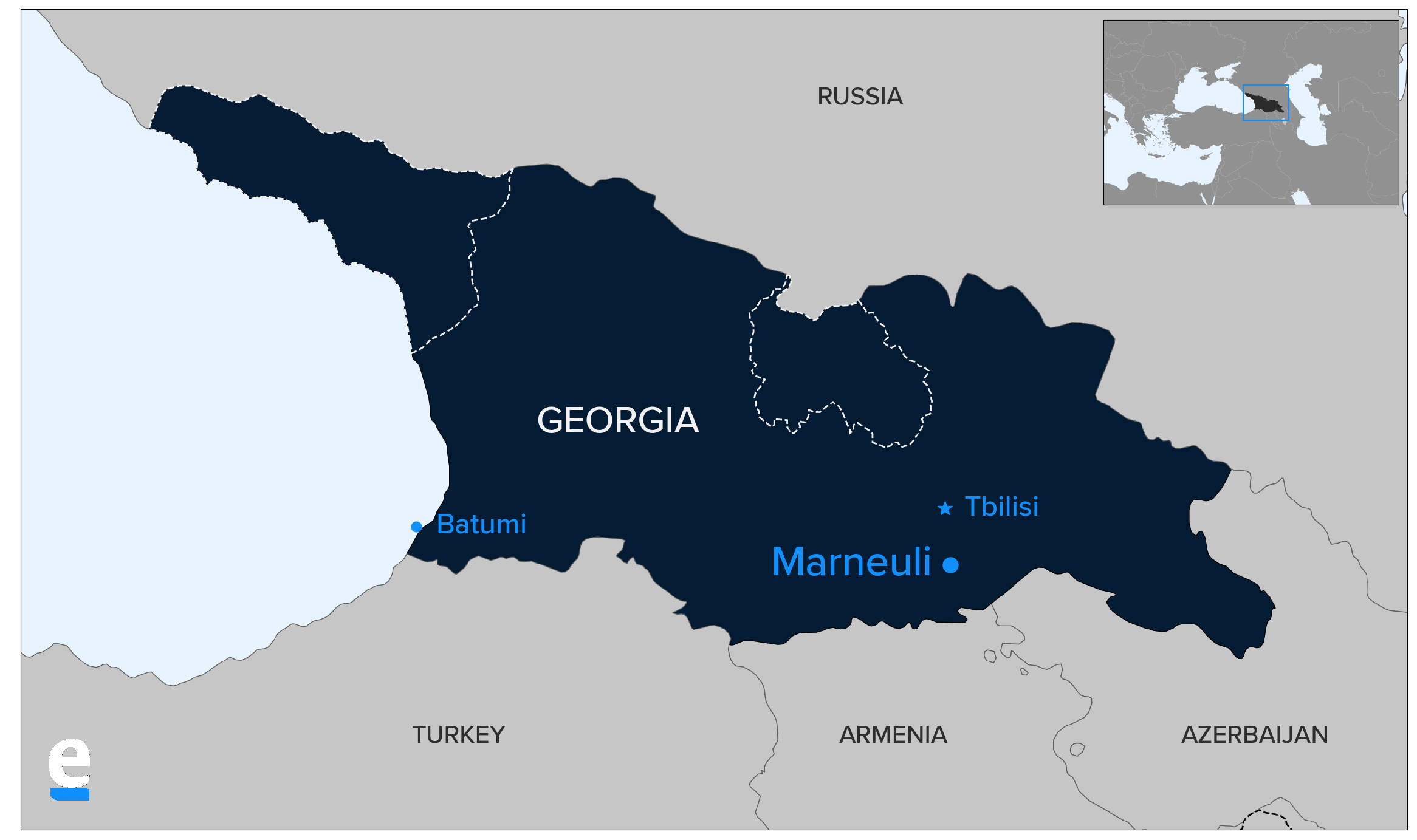 The officials included Fuad Muradov, chairman of Azerbaijan’s State Committee on Work with the Diaspora; Azerbaijan’s ambassador to Tbilisi; ethnic Azerbaijani members of Georgia’s parliament; and Zaur Dargalli, the deputy governor of the region. The Georgian officials were all members of the ruling Georgian Dream party, and Dargalli is their candidate in Marneuli’s mayoral elections, scheduled for May 19.

During his speech, Muradov turned to the GD officials, including Dargalli. “We have known each other more than a year, I have seen great support from them,” he said, according to a video of the event. “I wish them success, I hope they will always win all elections.”

Marneuli is about 80 percent ethnic Azerbaijani, and the surrounding province, Kvemo Kartli, is 42 percent Azerbaijani. Here, the influence of Azerbaijan is widely visible. SOCAR, the state oil company of Azerbaijan, and the Heydar Aliyev Foundation, dedicated to the former president (and father of the current president, Ilham Aliyev) sponsor charity projects like school renovations and book donations. At one school in the village of Sadakhlo, portraits of the elder Aliyev – not those of any Georgian official – hang on the walls.

And Muradov’s endorsement is indicative of how Baku tries to influence politics in the region, as well.

“Fuad Muradov didn’t come here just before the election to open the Integration Center,” Jeikhun Mahammadali, a local reporter for the Georgian TV network Rustavi 2, told Eurasianet. “It was a message for the people about which side they should support.”

Azerbaijani pro-government media also have been making their preference for Dargalli known. “Voters see Zaur Dargalli in mayoral post,” went one headline on the website DiasporPress.az three days after the Marneuli meeting.

A spokesman for Azerbaijan’s state diaspora committee rejected accusations of election interference. “The allegations related to Fuad Muradov's visit to Georgia on April 3 are completely false,” the spokesman, Aqil Asadov, told Eurasianet. Dargalli did not respond to requests for comment from Eurasianet.

The head of the Georgian Dream branch office in Marneuli, Ruslan Hajiyev, also denied any interference on Baku’s part.

“Azerbaijan has never interfered in Georgia’s internal affairs,” Hajiyev told Eurasianet. “Azerbaijani governmental officials always visit regions in Georgia where Azerbaijanis live. They shouldn’t come because we have an election every year? It is neither our nor their fault. This is how the situation is.”

But local activists say that Baku’s involvement in the election is part of a pattern in this part of Georgia.

Members of United National Movement, the largest opposition party in Georgia, protested in front of the tea house where the meeting was being held. “You have no right to interfere in Georgian elections,” protesters shouted, according to a video of the event.

When Abdullayev – the SOCAR oilman, and one of the most powerful men in Azerbaijan – emerged from the meeting, he was confronted by journalists about his agenda. “I always meet with elders to learn their problems,” Abdullayev told the reporters. “We don’t interfere in any politics. We know the government in Georgia. We don’t cooperate with the opposition. You should know it. This is the policy of our state.”

One of the officials at the meeting was Dargalli, who told the reporters that it was a coincidence that the meeting took place so soon before the vote. “In our country, many things coincide,” he said. “And there is an election every year.”

But the head of the Georgia-based Azerbaijani Youth Union, Leila Mamedova, noted that SOCAR’s visits to the region seemed to coincide with elections. “It has become a tradition,” she wrote in a Facebook post. “Why does SOCAR only remember the region’s problems when it is election time?”

Amil Mammadov, a local journalist from the community station Radio Marneuli, said that his sources from the meeting said that “it appeared that they discussed infrastructure projects. But because it was ahead of the election, they also talked about which party to vote for.”

SOCAR officials denied those allegations. “SOCAR does not intervene in the internal political processes of Georgia and other countries, and strongly rejects all groundless accusations,” the head of SOCAR’s local office in Georgia, Mahir Mammadov, told the news site musavat.com. “SOCAR will continue to be interested in the social issues of our compatriots living in Georgia and will continue to be supportive regardless of their political affiliation.”

Georgia and Azerbaijan have close relations; Georgia buys 97 percent of its natural gas from its eastern neighbor, and also serves as a critical transit route for Azerbaijan to export its oil and natural gas. Azerbaijan is the single largest foreign investor in Georgia, a fact that Azerbaijani officials regularly mention.

“Azerbaijan is the leader among the countries that invest in Georgia,” Ilham Aliyev told Giorgi Kvirikashvili, then Georgian prime minister, at a 2018 meeting. “Since 2012, we maintain this position. […] This indicates that our relations are at a high level.”

“Azerbaijan wishes for Georgia’s peace, stability, and prosperity,” Zahid Oruj, a member of Azerbaijan’s parliament, said last year. “Azerbaijan has taken real economic, security, and military steps over the past years to this end. Georgia needs Azerbaijan; it must be accepted.”

That influence has led to repeated allegations of Baku’s undue influence in Tbilisi, such as a crackdown on Azerbaijani dissidents living in Georgia or the kidnapping of independent Azerbaijani journalist Afghan Mukhtarli from a Tbilisi street in 2017.

Azerbaijan’s government also tries to use Georgia’s ethnic Azerbaijanis to support other interests. When ethnic Armenian-Georgians erected a statue to one of their compatriots who fought in the war against Azerbaijan in Nagorno-Karabakh in the 1990s, Azerbaijani officials said that Azerbaijanis would respond by putting up a monument of their own in Marneuli.

From UNM to GD

Georgia’s close ties with Azerbaijan long predate Georgian Dream’s control of government. And local activists say they believe Azerbaijan was attempting to pull strings in Kvemo Kartli under the previous United National Movement government as well. But Kamran Mamedov, an Azerbaijani-Georgian political analyst, said that the UNM had firmer control over the country and didn’t require foreign help in the same way Georgian Dream does. “I don’t know who came up with this idea” for Azerbaijan to take a stronger role in the Kvemo Kartli elections, Mamedov said. “But this is the fact, both countries thought Azerbaijani’s role is important in these elections.”

Mamedov said the open interference began in 2016, when Georgia held parliamentary elections in which Ahmad Imamquliyev ran as a UNM candidate against the GD’s Tamaz Naveriani. After the first round of the election, Azerbaijan’s ambassador and another Azerbaijani government official visited Marneuli and met publicly with Naveriani.

Imamquliyev also said that representatives of SOCAR visited the region to support Naveriani. “They interfered in the election,” he told Eurasianet.

He is now running against Dargalli for mayor of Marneuli.

Ulkar Natiqqizi is an Azerbaijani journalist based in Tbilisi. Sign up for Eurasianet's free weekly newsletter.