Brussels notes some "progress" toward addressing its conditions for membership candidate status. But no one knows how much will be enough. 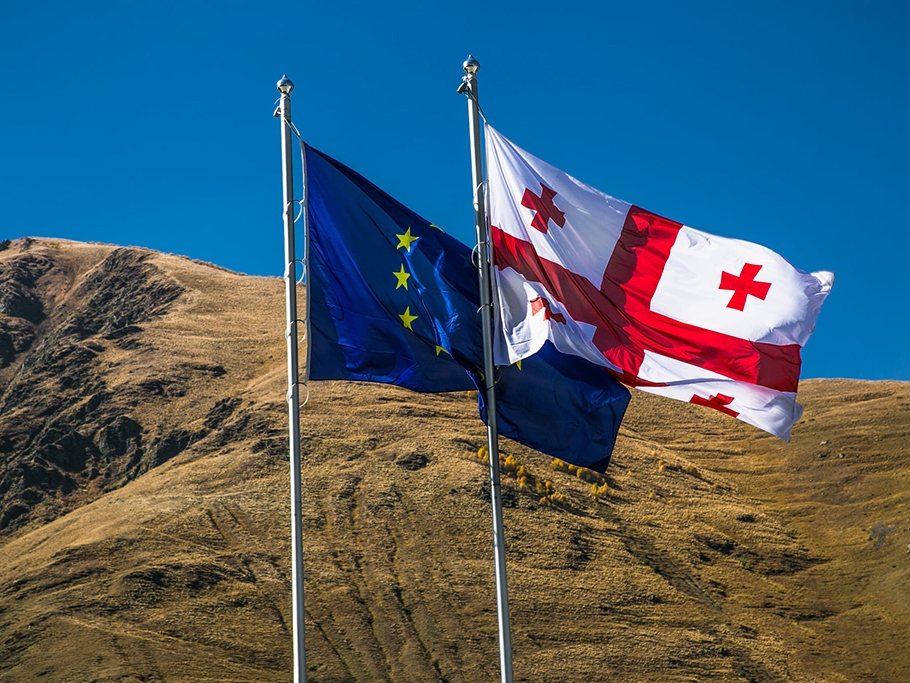 How much progress on democratization will be enough for Brussels to reverse its earlier decision? (Georgian Dream)

Last summer, while granting Ukraine and Moldova candidate status, the EU promised Georgia the same only after it met 12 conditions laid out by the European Commission. Half a year later, many acknowledge progress on some reforms, but there is disagreement on whether this will be enough to reverse the previous failure.

"There is clearly a lot of progress on some priorities, while work on others will continue. We are watching this very closely," Pawel Herczynski, EU ambassador to Georgia, told reporters last week as he was holding meetings with heads of parliamentary committees. "By the end of the year, the progress will be assessed first by the European Commission, and then the decision will be taken by the leaders of the 27 member states."

The EU's decision to defer Georgian candidacy was widely attributed to the democratic challenges and deep political polarization Georgia has faced over the years. The European Commission, the EU's executive arm, is expected to reassess the country's progress in October, after postponing the initial deadline that fell at the end of 2022.

Ahead of the new year, Parliament Chairman Shalva Papuashvili reported on progress made by the legislative body in its fall session toward addressing the priorities.

Papuashvili marked most of the reforms as fully implemented, while others were pending or awaiting recommendations from relevant international bodies. According to his list, the most progress had been made on the implementation of European Court of Human Rights judgments, the fight against organized crime, strengthening parliamentary oversight, anti-corruption, election laws, and gender equality.

"Looking forward to working closely with parliamentary political parties to finalize the remaining reforms as well as with the European Union in 2023 on the assessment process to secure a well-deserved EU candidate country status for Georgia," Papuashvili said in his December 29 tweet.

But the government's opponents and some of the watchdogs that track progress do not share Papuashvili's optimism.

A 54-page research document recently published by Georgia's Reforms Associates (GRASS), a Tbilisi-based think tank, said six out of 12 recommendations "have not been fulfilled." Three out of the remaining six, GRASS says, were partially fulfilled, two others were "largely fulfilled," and only one demand was "fully" met.

The ruling party did draft bills on judicial independence, widely regarded as Georgian democracy's Achilles heel, and deoligarchization, probably the most controversial of all the EU demands. The bills are now awaiting assessments from international advisory bodies – the Venice Commission and the OSCE's Office for Democratic Institutions and Human Rights (ODIHR).

But the bills have met criticism for not serving their true ultimate purpose. For example, Georgian Dream largely copied Ukraine's anti-oligarchy laws, arguing that they followed Brussels-lauded foreign practices, while opponents claimed the bill was tailored to spare Georgian Dream founder and billionaire Bidzina Ivanishvili, whom they see as the country's sole oligarch.

In terms of media freedom and protection of vulnerable groups, critics have pointed to the continued failure of authorities to bring to justice those responsible for organizing the 2021 anti-LGBT attacks that left dozens of people injured, most of them journalists; one journalist died shortly afterwards.

The biggest remaining challenge is number one on the list of the EU's priorities: ending the country's deep-seated political polarization. Despite some attempts by the ruling party and the opposition to cooperate on reforms, the discussions remain, well, polarized.

One area where that is obvious is the process of electing a new public defender (ombudsperson), another EU priority that requires ruling-party-opposition consensus. The process is locked in a stalemate as the ruling party refused to back any of the three candidates picked by civil society groups and the opposition, and instead presented its own five candidates.

Work on choosing a public defender will resume when the parliament's spring term convenes in February.

While nobody expects all 12 priorities to be fully addressed, the main question is how much progress on democratization will be enough for Brussels to reverse its earlier decision.

"There should not be some expectation that the European Union will make a purely geopolitical decision," Vano Chkhikvadze, who works on Georgia-EU relations for the Open Society Georgia Foundation, said last week, warning that Georgia's newfound geopolitical significance as an energy corridor with Europe may not outweigh failure to deliver progress on key priorities.

The EU is not expected to give any clear signs before the European Commission delivers its final assessment in October.

While Georgia’s candidacy in areas of economy and finance is thought to be stronger than Moldova’s and Ukraine’s, the country lags when it comes to justice and human rights, areas to which Brussels "pays special attention," wrote RFE/RL Europe editor Rikard Jozwiak this month. "This means that although Tbilisi has a good level of compatibility with the EU in many areas, overall it is still in third place on the long path to Brussels."