Georgians and Russians have not had such close contact, and on such a scale, since the breakup of Soviet Union. Now they are figuring each other out again. Veronika Zavodnova in the flower shop she runs with a Ukrainian partner. (photos by Giorgi Lomsadze)

Russian émigré Valentin Semyonov uses sausage as an icebreaker when he meets his Georgian neighbors. “This tastes just like the good old Soviet stuff!” the gangly 38-year-old says as he hands around sticks of salami, of which he appears to have brought an endless supply from his motherland.

There is hardly a neighbor in his suburban Tbilisi apartment building who has not received this gift since Semyonov moved to Georgia following Russia’s invasion of Ukraine. Invariably clad in a green tracksuit and bright white sneakers, the ebullient Russian has knocked on every door in the building, making acquaintances and gathering intel on the best shopping, sightseeing and workout options in the city.

But this meet-and-greet campaign has another agenda as well: to gauge the mood toward Russians in his new home. “I generally try to meet everyone everywhere I go, but, yes, I do confess that I’ve been going out of my way here because I was told that everyone here now hates Russians because of Ukraine,” he told Eurasianet.

Georgia has become an escape hatch for tens of thousands of Russians who have fled their homes because of the punishing effect of international sanctions and a heightened crackdown on the political opposition. Semyonov arrived in March, one of over 43,000 Russians who arrived in Georgia in that month – the record for arrivals in a single month – attracted by the lack of a visa requirement and easy access by land.

Semyonov drove down from his home in Rostov-on-Don, and brought along his wife, two daughters and his little software-development business – essentially a one-man operation that became unworkable once international sanctions disrupted bank transfers into Russia.

Many Russians have a stereotype of Georgia that it is a place of sun, fun, and khachapuri – Georgia’s famed cheese pie and a symbol of its famed hospitality.

But the Semyonovs instead found an icy welcome in every sense. Tbilisi was covered in a late-spring snow, and anti-Russia messages were everywhere.

At the entrance to their apartment building a “Russia is Occupier” sign hung, emblazoned in the colors of the Ukrainian and Georgian flags. On an exploratory stroll around the neighborhood they found graffiti advising Russians to go home or, alternatively, to that particular destination that Ukrainian border guards famously suggested an attacking Russian warship should explore.

On his way home Semyonov dropped into a small shop and asked for some soap and other bathroom supplies, speaking in Russian. The middle-aged woman behind the counter shot daggers at him and replied that she had nothing that could wash the blood off his hands.

A wave of anger

As images of suffering and devastation in Ukraine were broadcast worldwide, they caused particular outrage among Georgians to whom it felt like déjà vu of Russia’s 2008 invasion of their country. A long list of grievances against Russian imperialism, which had been bubbling just under the surface, burst out in a massive wave of anger against Russian people that took no prisoners, not even Russian expats who openly opposed the war.

Russian video blogger Sergey Khvolinski spent the first day of war huddled at his home in Tbilisi, mortified by the events in Ukraine.

He also found himself caught in the crossfire. On one hand, he had to respond to a volley of shaming and animadversion that rained upon on his YouTube channel and Instagram page. On the other, he argued with his father back in Russia, who supported the invasion. “My dad believes everything Russian television tells him,” Khvolinski told Eurasianet.

Native to Russia’s Jewish Autonomous Oblast, the relic of a Soviet experiment in creating a Jewish homeland in Russia’s far east, Khvolinski had been vagabonding around various cities and reporting on his experiences. He dropped anchor in Georgia in November 2021.

In his first dispatch from Tbilisi he gushed about the atmospheric courtyards and Instagram-ready old townhouses in the historic part of the city, and complained about the chaotic traffic and lack of regard for personal space. “Random people come and pet my dog without asking me if that’s okay,” he said.

When he finally braved a trip outside after the start of the war, he saw that Tbilisi had changed. Virtually the entire city was draped in Ukrainian flags. There were massive pro-Ukraine demonstrations and humanitarian aid was being collected at every corner. There was also a palpable anti-Russian mood.

In a subsequent video instalment, he made it very clear where he stands on Ukraine. “Russia is the only place where you can live today without experiencing the collective sense of shame that the whole world expects Russians to feel,” he said.

But that failed to assuage critics. “Just listen to this guy, instead of going back to Russia and standing up to his government he puts his tail between his legs and lays low in another country that is also occupied by his country’s army!” one Georgian wrote on Facebook, sharing Khvolinski’s video. In comments under her post, dozens of her Facebook friends piled on and agreed with her.

“I’m not a hero,” Khvolinski told Eurasianet. “Everyone wants Russians to go back and fight, but I’d rather help in the way that I can.” This includes collecting aid for Ukrainians and trying to change the perspective of his fellow citizens who don’t see past official propaganda. 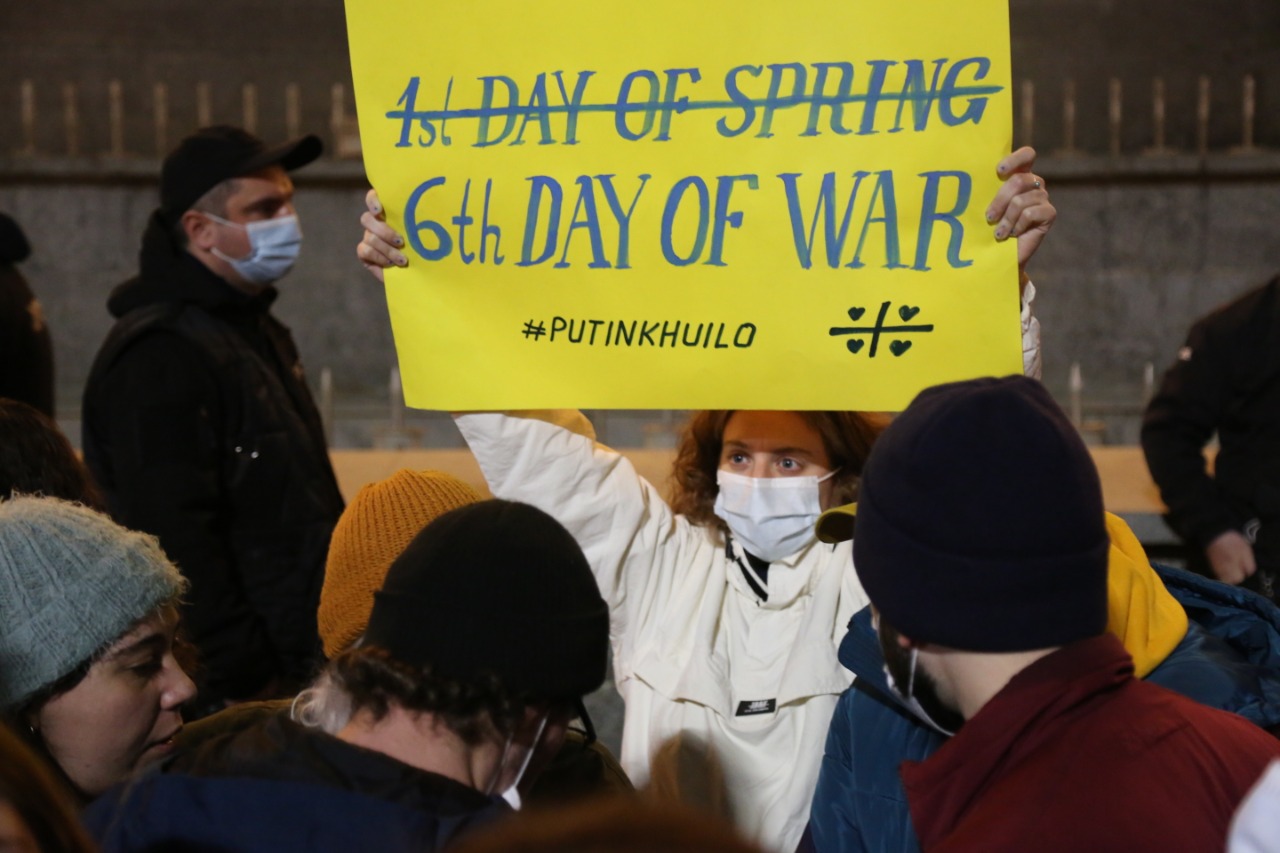 In the early days of war, Khvolinski was concerned for his safety as he waded his way through angry crowds of protesters, but he said that he has never been personally targeted.

First she found her car covered in anti-Russia stickers. Betrayed by its Russian license plates, the car later got keyed on both sides. Zavodnova eventually got Georgian plates.

Originally from Khabarovsk, Zavodnova has lived in Tbilisi for three years and runs a flower boutique here. The shop’s co-owner is a Ukrainian and they employ several other Ukrainians.

“But nobody was interested to learn more about us, they simply rained anger on our Instagram page,” she said. “People, including my own neighbor, demanded that we openly state our position on our business page about this whole situation, but I frankly did not know what to do.”

Zavodnova is reduced to tears when she recalls talking to her Ukrainian friends after the war started. “I was crying and was saying that I was sorry, and they were comforting me, even though they were the ones sheltering in metro stations and bunkers,” she said.

But Tbilisi did not believe in tears. Many Georgians argued that the time for restraint or prevarication was over, and Russians should state in no uncertain terms where they stand on the Kremlin’s policies, even putting it in writing. One of the largest Georgian banks even made Russian citizens sign a paper condemning Russia’s occupation of Ukraine and Georgia to open an account.

“Many cannot sign a paper like that, not because they disagree, but because they can’t be sure that it does not become public and that the FSB (Russia’s Federal Security Service) does not show up at their parents’ doors in Russia,” Zavodnova said.

Many of the Russian expats still find the anger understandable given the troubled history of Georgia-Russian relations, but they argue its unfair to lump Russians together into a single attacking and occupying entity.

Georgians counter that they have a little way of telling Russians apart.

Much of Georgia initially fervently opposed the sudden influx of Russians, and many still do. Some viewed them as a security threat: With Russian troops deployed in breakaway Abkhazia and South Ossetia, within a shooting distance from Georgian cities, and now with a growing civilian Russian presence, Georgians felt overrun and cornered.

Others felt that offering an escape to Russians and their businesses was a stab in the back to Ukrainians, as it undermined international efforts to starve Moscow into ending its attack on Ukraine. Fully 1,200 Russian-run businesses have been set up in Georgia in recent months, corruption watchdog Transparency International reported.

As it stands now, Russians can stay in Georgia for a year visa-free, while Georgians need visas to enter Russia. But with the Russian influx, many Georgians called on their government to issue a visa regime to give preference to dissidents and activists.

Georgian authorities in fact have been doing the opposite. Apparently fearing retaliation from Moscow, the authorities have denied entry to many well-known Kremlin critics – most recently, Olga Borisova, a member of the protest group Pussy Riot – though many others have made it in.

Some ordinary Georgians have taken matters into their hands. Some have refused to rent apartments to Russians, other made sure that the new arrivals understood the sentiment in Georgia. Some of Tbilisi’s best-known bars and restaurants put up signs saying that are open to Russian customers only so long as they oppose the Kremlin’s policies toward Ukraine and Georgia. Many of these places are now packed with Russians, though there are occasionally online complaints that the signs are Russophobic.

When a Russian couple moved into an apartment across from Mikheil Devshurashvili’s flat in Tbilisi, he put a sign on the elevator with anatomically explicit epithet about Vladimir Putin that is now universally used by Ukrainians and Georgians. The neighbors did not seem to mind. Devshurashvili eventually decided that he had an issue with the Georgian government, not with the Russians.

“There should be a fast-track approval mechanism for actual dissidents and activists, everyone else should stand in the line and get their backgrounds checked,” Devshurashvili said.

In the meantime, Semyonov, the sausage maven, has educated himself about the issues that rub Georgians the wrong way, including an arrogant expectation that everyone speak Russian. With his neighborhood charm campaign, he has sought to humanize himself in the eyes of his neighbors – “so they don’t think that all Russians are killers of Bucha” he said, referring to one site of Russian atrocities in Ukraine – and has built a large social circle as a safety net. The sausage has played a key role in his neighborhood diplomacy.

Georgians don’t necessarily share Russians’ fascination with sausage, but the neighbors accepted the olive branch and some reciprocated with platters of fruit. The country, too, is eventually grudgingly accepting the growing Russian presence.

Summer has brought to Georgia a wave of Russian tourists, on top of the dissidents and economic migrants. Clubs and cafes are now packed with Russian hipsters, while suburban parks are full of Russian parents screaming at their Nadyas, Andriushas and Katyas to behave.

Georgians and Russians have not had such close contact, and on such a scale, since the breakup of the Soviet Union.

There are plenty of sore spots – many Georgians cringe in distaste when a loud drunken Russian party breaks out. But more interaction is helping both sides look past stereotypes, and Georgians also notice other Russians who act respectfully and bother to learn how to say “thank you” in Georgian.

“In the beginning there was only an indiscriminate anger,” said Khvolinski. “But now we are having a conversation.”