Javakheti, a region once notorious for neglect and separatist tendencies, is steadily building ties with the rest of Georgia. 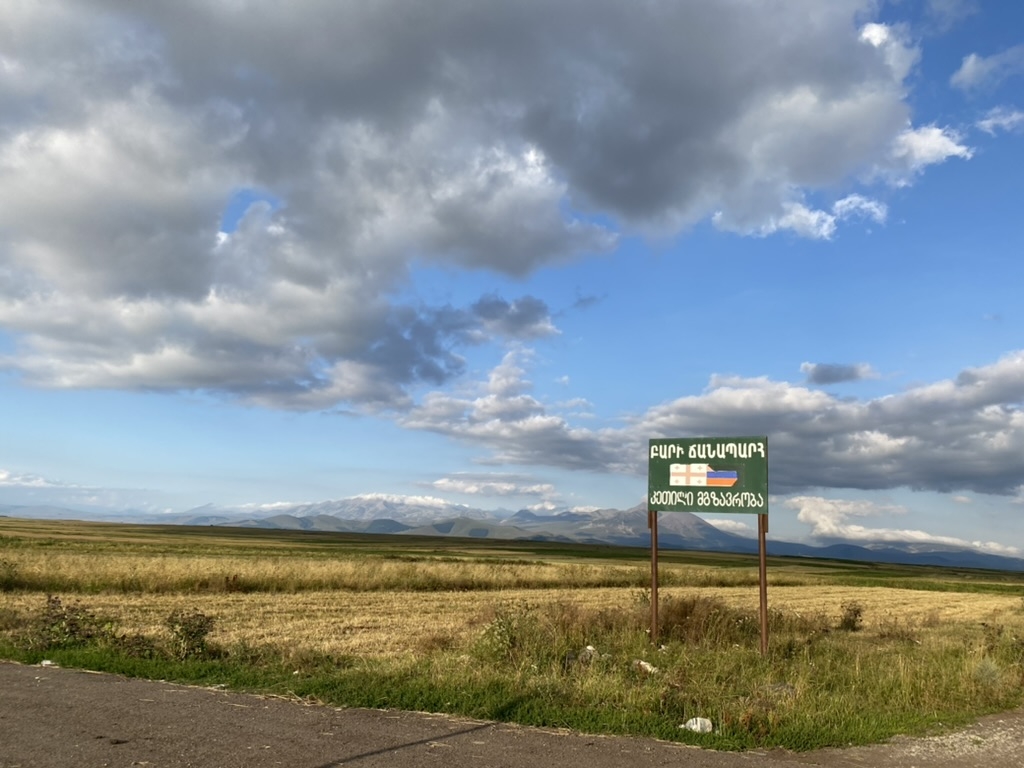 A sign in Georgian and Armenian wishes travelers a good trip. (photos by Joshua Kucera)

Nairi Yeritsyan, the head of the city council in the southern Georgian city of Akhalkalaki, doesn’t speak Georgian.

It is not unusual here: More than 90 percent of the population is ethnic Armenian, and Yeritsyan estimates that only 10-15 percent of residents speak Georgian comfortably. “A lot of people can speak [Georgian] in the bazaar – they can say if potatoes cost one lari or two lari. But to do government work … no,” he told Eurasianet.

With a new generation, though, that is changing. A state program aimed at preparing ethnic minority students for study at Georgian universities is more than a decade old, and by now has produced a small class of young graduates who speak fluent Georgian.

Among them: Yeritsyan’s sons, who graduated from universities in Tbilisi and now live there. Yeritsyan says that his oldest son, a dental surgeon, speaks Georgian so well that “Georgians are ashamed to speak with him, he speaks better than they do. They say, ‘you use words that even we Georgians don’t know.’”

The program, known as 1+4, allows ethnic minority high school graduates to take university entrance exams in their own language, and if they are accepted they are given a year of intensive Georgian language training to prepare them for the regular four-year Georgian university curriculum.

Each year the program takes in roughly 100 Armenian and 100 Azerbaijani students, as well as smaller numbers of Abkhazians and Ossetians. It produces graduates who speak Georgian, make Georgian friends, and, whether they stay in Tbilisi or return to their home regions, strengthen ties between their communities and mainstream Georgian society. 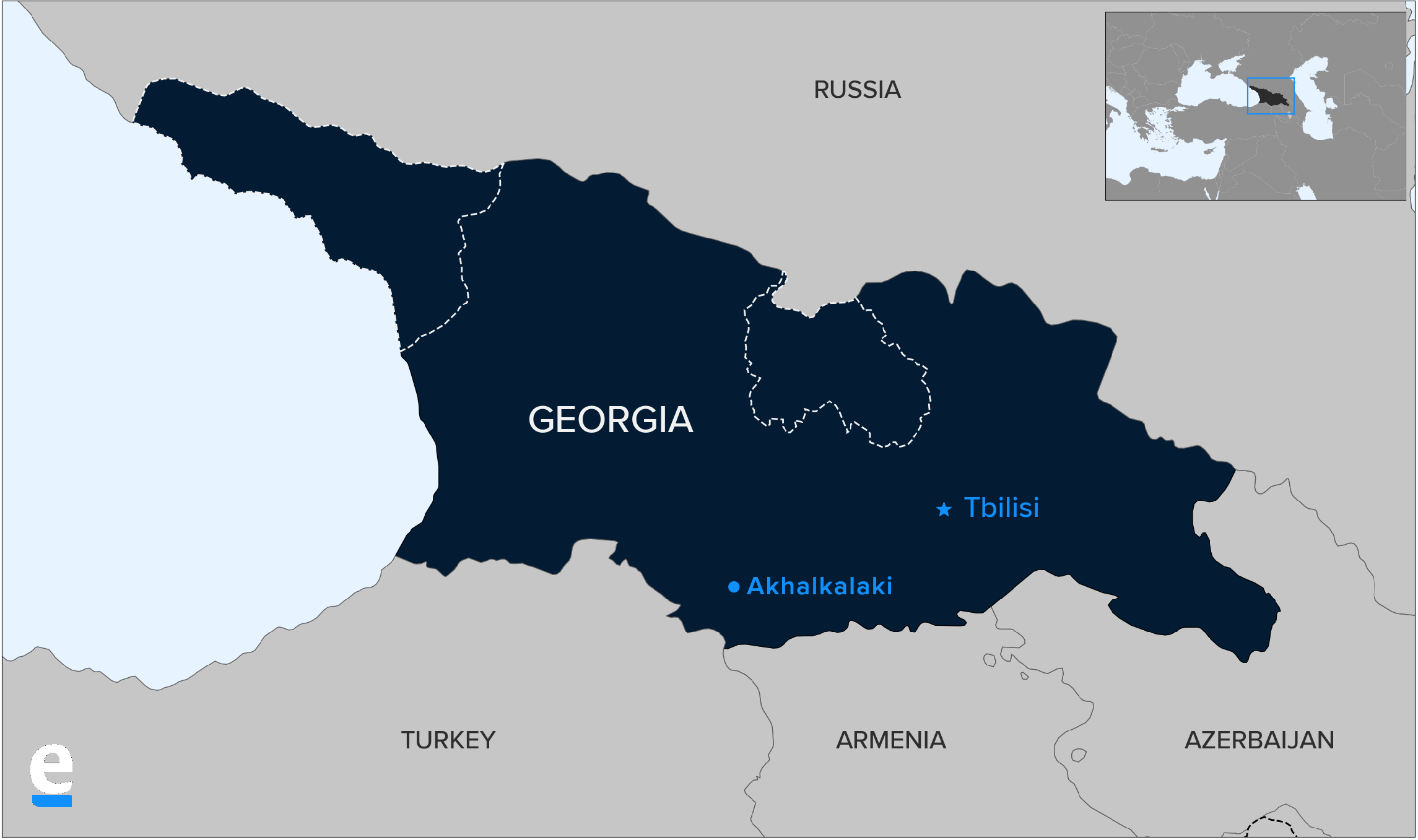 Yeritsyan described how his son helps Javakhetians find good doctors when they go to Tbilisi for medical care. That improves his standing among the capital’s medical community, who are grateful for the business he sends their way. And there was a strong contingent of Tbilisi friends, ethnic Georgians, who came down to Akhalkalaki to celebrate his wedding. “All of this helps us integrate better into Georgia,” Yeritsyan said.

Before, students were more likely to go to university in Armenia, where they could study in their native language, and people here speak proudly of the teachers, doctors, and other professionals that form a sort of Javakheti diaspora in Yerevan. “There wasn’t anyone here who didn’t have a relative in Yerevan,” Yeritsyan said.

More working class people, meanwhile, have traditionally seen their fates tied to Russia. A large Soviet, then Russian, military base operated in Akhalkalaki until 2007. Thousands of locals served at the base, and when it closed down many moved to Russia, giving their relatives who remained a family connection there. Today, nearly every village family has at least one member doing seasonal work in Russia, usually construction, an economic lifeline for the poor region.

All of this meant that the region’s ties to the rest of Georgia were long tenuous. In the 1990s, a separatist movement arose here, and while that has long died out, many Georgians remain suspicious of Javakheti Armenians’ loyalty. In Javakheti, meanwhile, people were resentful of what they saw as neglect from the central government and a sense that they were not fully valued citizens of Georgia.

“People felt that they weren’t as much of a Georgian as, say, some Kobakhdize from Kakheti,” said Rima Garibyan, the editor-in-chief of the Akhalkalaki-based news website Jnews, using a typical Georgian name and a quintessentially Georgian region. “If maybe they didn’t have water, ‘that’s because we’re Armenians.’ That complex of being a minority was very strong.”

As time has passed, however, more and more people see that all rural regions of Georgia are neglected: An excessively centralized system means that Tbilisi is not responsive to local needs in Javakheti or in any other region, Garibyan said.

“So you start to understand, many problems are not decided at the local level, and these problems are not only our problems but everywhere. Maybe they have the same problems in Kakheti, and a mayor in Kakheti can’t do any more about it than the mayor of Akhalkalaki,” she said.

One way in which Javakheti does differ from the rest of Georgia, which continues to cause consternation in Tbilisi and among Georgia’s Western partners, is in its geopolitical views. Opinion polls consistently show people in Armenian communities holding much more pro-Russia stances than other Georgians.

In one recent poll from the Caucasus Resource Research Centers, more Georgian Armenians said either Ukraine, the United States, or NATO was at fault for the war in Ukraine than Russia. Only 38 percent of Armenians blamed Russia for the war – a far lower figure than any other ethnic group, including Russians.

In March, the number of visitors to the Jnews website dropped significantly, and Garibyan thinks it was because the site’s news about the war was perceived as pro-Ukrainian. “People were asking us, ‘why are you on Ukraine’s side?’” She says the site strove for objectivity: “Even if you feel something deep in your heart, you have to show all sides. But still, for some reason, people thought we were on Ukraine’s side. People didn’t want to hear that in Ukraine people were dying or suffering, that some building was being bombed, they didn’t want to see it.”

If people consume news here it is more often from Russian sources, as Georgian national networks offer only token programming in minority languages. “When I watch TV, I watch Russian TV, whether I want to or not,” Yeritsyan said. That supplements the deep, multifaceted connections that Javakheti has with Russia. “We didn’t have anything like that with America. If I see that America is sweeter and tastier, I don’t know, I can’t taste it on my tongue,” he said.

Yeritsyan is cagey about his own views on the war, but allows that he argues about it regularly with his son, who watches more Georgian news. “Many people say that Russia is right, that if the Warsaw Pact was disbanded then why wasn’t NATO,” he said. “Other people say that Ukrainians have the right to make their own choice. So a lot of arguments come out of that.”

There is a generational and educational divide here, as well. “The situation with Euroskepticism is changing,” said Tigran Tarzyan, a 4+1 graduate who grew up in a village in Javakheti and now is an activist with the Tbilisi-based Social Justice Center. “There are many young people like me in Javakheti, who studied in Tbilisi, or who served in the army and then returned.”

Even as a younger, more educated generation builds ties with the rest of Georgia, in much of Javakheti ties with Russia remain strong.

In the village of Kartsakhi, on the border with Turkey, residents estimate that 80 percent of the working-age men are in Russia. “There is nothing here – no gas, no good water, most people work abroad,” said one resident, Svetlana Moshetyan, whose husband works driving a steamroller outside Moscow. “Our lives depend on the ruble.”

There is one Georgian living in Kartsakhi, a teacher who moved there to teach Georgian in the school. Moshetyan said the level of Georgian language in the village is nevertheless declining, and young people who go to university are still more likely to do so in Armenia than in Georgia. But here too the incentives are changing: “If someone has a Georgian diploma they can find a job here [in Javakheti], but with an Armenian one, not really.”

Different sectors of society see integration into the rest of Georgia differently, Garibyan said. Her website is registered in Georgia and she wants her children to go to university in Tbilisi. “So I am tying my fate, my future, to Georgia. For me, I need integration,” she said. “But take another family: The man works in Russia and the woman raises the kids. The mother is thinking, once the kids grow up they will join their father as labor migrants. What do they need Georgian for? Either psychologically or practically, they don’t need integration.”

Despite the growing integration, people in Javakheti still maintain many grievances with the central government.

Georgian law requires signs to be in the Georgian language even in Javakheti, which Yeritsyan complains is in contravention of a Council of Europe charter on minority languages. While the government heavily supports viticulture in regions like Kakheti, it does not do anything similar to support potato agriculture, Javakheti’s staple crop, Tarzyan said. And the Georgian security services still play an outsized role in Javakheti, even having to approve the city government’s hiring of a streetsweeper, Garibyan said. Many complain that Javakheti is being left out of the tourism boom that much of the rest of Georgia has experienced in recent years.

And even as they get become more integrated into the rest of Georgia, people in Javakheti still keep an eye to the south.

“We are closely tied to Armenia, we consider it to be our homeland,” Yeritsyan said. “Sometimes we tell that to our Georgian colleagues and they lose their minds. And I say Georgia is my state, and I do everything that I can to make sure it’s the best country in the world. I’m a patriot of Georgia. But, I’m sorry, I still care what happens in Armenia.”

Still, people bristle at the notion that persists in the rest of Georgia that they represent a separatist, pro-Russian “fifth column” and complain that the Georgian media depicts a distorted picture of them.

Boris Karslyan, a journalist in Ninotsminda, recalled a recent trip to Tbilisi in which he spoke with a taxi driver in Georgian, but with a noticeable accent. “He asked me where I was from, and I told him Javakheti,” he said.

“I thought you guys didn’t speak Georgian,” Karslyan said the driver told him. “But I told him this is old news, there are already a lot of us. And I said he probably had students from Javakheti [as customers] who spoke perfect Georgian and he didn’t even notice.”