Georgians are going to the polls to elect mayors and city councils. But the vote is fraught with the potential for instability on a national scale. 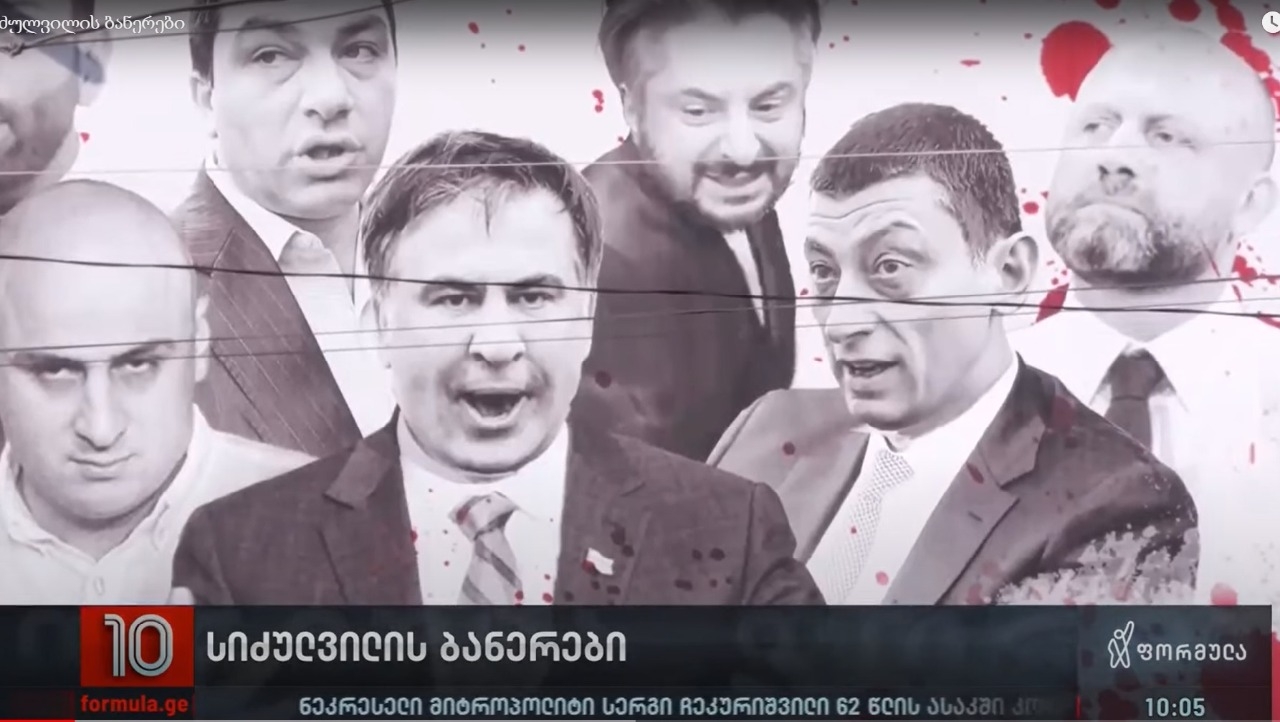 Blood-spattered billboards have popped up around the country depicting Georgian Dream opponents together. (screengrab)

After this story was published, on the evening of October 1, Prime Minister Irakli Garibashvili announced that the authorities had arrested former president Mikheil Saakashvili.

Georgia’s elections were already going to be tense. And that was before the last-minute appearance of exiled ex-president Mikheil Saakashvili ratcheted up the drama to new heights.

On the eve of the country’s October 2 vote, Saakashvili claimed to have snuck past border controls and returned home to bring down his archnemesis, Bidzina Ivanishvili and his ruling Georgian Dream party.

“We should all go to the election and vote for the United National Movement, not Ivanishvili,” Saakashvili said in a Facebook live broadcast purportedly recorded in the Black Sea port city of Batumi. “See you very soon in Tbilisi!” he added.

Despite living in exile for the last eight years – his citizenship revoked by the Georgian Dream-run government – Saakashvili has continued to lead his formerly ruling United National Movement (UNM), which remains the biggest opposition party in the country.

Georgian Dream officials, who have consistently vowed to arrest Saakashvili the moment he sets foot on Georgian soil, scrambled to respond. “For one, Mikheil Saakashvili is not in Batumi, secondly Mikheil Saakashvili is a clown,” said Irakli Kobakhidze, the party’s chairman. Other officials claimed that video evidence of the ex-president’s arrival in Georgia was a deepfake.

Some turned it into a joke. “I saw Saakashvili pop out of a sewage manhole and scream that he was back, but unfortunately he went back down, closed the lid and become one with the infinite world beneath us,” said Beka Davituliani, another Georgian Dream member.

The farcical situation, in which the nation cannot figure out whether Saakashvili is inside its borders, is fraught with serious consequences, as it threatens to heat long-simmering political tensions to the boiling point.

Under normal circumstances, the vote on Saturday would be a second-tier election, a series of 64 mayoral and municipal council races, including in Tbilisi, that would have had only a limited impact on national politics. But they had already taken on national-level implications even before Saakashvili’s alleged homecoming added to the stakes.

The vote has been largely framed as a referendum on Georgian Dream, the party that has dominated Georgia for nine years but which suffered a crisis of legitimacy following last year’s controversial parliamentary polls. “The fight for Tbilisi is the front line in this referendum, through which we will take back Georgia,” said Nika Melia, the UNM’s chairman and its candidate for Tbilisi mayor, in remarks to the media.

As part of a European Union-brokered deal to deescalate tensions that resulted from last year’s elections, Georgian Dream itself initially agreed to turn this local vote into a national referendum: The party promised to call early parliamentary polls should it fail to gain more than 43 percent of the votes in the local election.

On April 19, Georgian Dream and some opposition parties (though not the UNM) ceremonially signed the agreement, which also stipulated an amnesty for some opposition figures and series of judicial reforms to restore trust in the electoral process.

But Georgian Dream then walked out on the EU-brokered deal in July, as it began to be clear that 43 percent may have been an unrealistic target. “There will be no early election and no [parliamentary] election until 2024,” said Georgian Dream Chairman Kobakhidze.

Support for Georgian Dream suffered after its former leader, ex-prime minister Giorgi Gakharia, left to start his own opposition party, For Georgia. Polls suggest he took some of Georgian Dream supporters with him.

Following Georgian Dream’s abrogation of the agreement, UNM signed it, and now the opposition – most vocally, UNM – insists that the national vote should still be called. Given the divergent expectations, the stage has been set for a deeper confrontation.

The campaigning – mainly a three-way fight between Georgian Dream, UNM and For Georgia – has become progressively more toxic. Any concrete proposals on how to make life better for Georgians are drowned out by hostile exchanges and insults on TV and social media.

Although there is little love lost between UNM and For Georgia, Georgian Dream’s strategy has been to rhetorically lump the two together as part of a purported scheme by the party’s favorite bogeyman, Saakashvili, to retake power. Georgians have been alarmed as blood-spattered billboards have popped up around the country – with no explanation about where they came from – depicting Gakharia together with Saakashvili, other UNM leaders, and UNM-friendly journalists.

Polls suggest an essentially two-way race between Georgian Dream and UNM for city council seats, but Gakharia has emerged as a strong challenger to incumbent Kakha Kaladze in the Tbilisi mayoral race. That has placed him firmly in the crosshairs of the ruling party and the subject of a character assassination campaign with senior officials claiming – without any evidence – that he is a habitual cocaine user.

“The complete nonsense we hear, especially from the ruling party, defies political interpretation,” Devdariani said. “The stream of random, toxic and corrosive madness” is “just keeping people terribly irritated and inert at the same time. And it is going to blow,” he said.

In a potential preview of things to come, the respective chairmen of Georgian Dream and UNM – Kobakhidze and Melia – got into fisticuffs at the doorstep of the EU embassy in Tbilisi a week ahead of the vote.

Many saw the incident as illustrative of Georgian politicians’ growing contempt for EU’s arduous attempts to normalize Georgia’s political environment.

Prime Minister Irakli Garibashvili’s hardline actions and illiberal statements have even called into question Georgia’s stated commitment to “European values” and its aspirations to EU membership.

The government recently lost out on a 75 million euro loan from the EU because it failed to implement another key part of the April 19 deal, to depoliticize judicial appointments.

And in late September the Georgian ambassador to Brussels was summoned to the EU head office to answer questions about revelations of Georgian security services’ alleged spying on everyone from Orthodox clerics to journalists, political opponents and Western diplomats.

“We should not see it as natural that a close friend and partner such as Georgia would be engaged in the types of activities against us,” the EU representative in Georgia, Carl Hartzell, said, after reams of leaked government surveillance files appeared in the media. “A surveillance society is not what should be part of a democratic society,” he said.

Like her EU counterpart, United States Ambassador Kelly Degnan has also been taking an unusually stern tone with the Georgian government in recent months. Degnan said that Washington was “exasperated” with Georgian Dream’s decision to walk out of the EU-brokered deal. She also slammed Garibashvili for failing to show “forceful leadership” in response to a wave of homophobic and anti-media violence in Tbilisi this summer.

With the government apparently unconcerned about European and American censure, there is less and less stopping Georgia from sliding into autocracy and chaos, observers warn. “Georgia’s long-accumulated achievements in building something approaching a democratic state are in danger of suffering death by thousand cuts,” wrote Thomas de Waal, a longtime analyst of the Caucasus.

Then along came Saakashvili, upping the ante further.

Over the years he has repeatedly vowed to return, despite facing criminal charges of abuse of power. He had already signaled more serious intentions this time, earlier posting on social media a copy of a plane ticket from Kyiv to Tbilisi. “Saakashvili’s only goal is to create unrest, instability and chaos in our country,” Garibashvili said after the ex-president flaunted his ticket.

The prime minister, billionaire Ivanishvili’s longtime factotum, said then that the ex-president would go straight to jail from the arrivals gate. He also claimed that Georgian Dream could mobilize supporters to outnumber Saakashvili’s fans. “Saakashvili will be met by hundreds of thousands of angry and exasperated people,” he said.

But all the prime minister’s angry men need to find Saakashvili first.