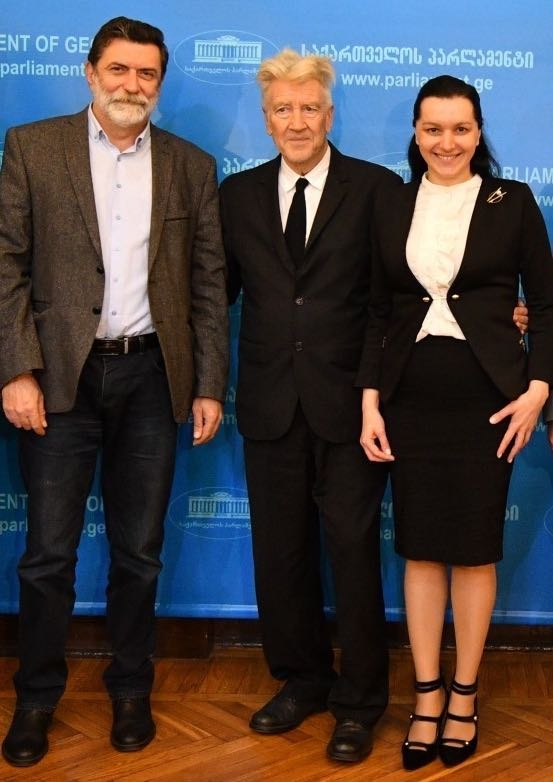 David Lynch paying an “official visit” to the Georgian parliament, meeting lawmakers and government ministers, and expounding on the merits of a silent mantra could have been a scene out of one of his surrealist films. Except, it actually just happened and Georgian legislators have a group photo to prove it.

The goal of the legendary director’s November 18-21 visit to Tbilisi appears to be somewhere between starting a film school and selling Georgians on the usefulness of transcendental meditation. Either way, Georgian film-lovers, who, like fans elsewhere, have spent much time trying to fathom what exactly happened to Laura Palmer in the Twin Peaks series, were overexcited to have him.

Lynch’s schedule in Georgia was akin to a visiting diplomat’s routine. Aside from MPs and ministers, he also met soldiers injured in combat, all interlaced with a screening of his 2001 “Mulholland Drive.”

Some of his hosts, in fact, do hope that the visit could serve a diplomatic purpose.

“I hope that, following this visit, the great American director becomes, in a way, Georgia’s ambassador in Hollywood,” said Mariam Jashi, the chairperson of the parliamentary committee for education, science and culture.

If anywhere, Lynch’s attention appears more Eurasia-focused, though. Five months before his visit, a Caucasus chapter of the David Lynch Foundation opened in the Georgian capital. The Foundation works primarily on promoting quiet-time programs in schools and alleviating stress through meditation, but it also has rough plans to start a film festival and film school named after Lynch.

Georgian parliamentarians suggested that perhaps Georgia’s State University of Theatre and Film can be of use for these plans.

At a November 20 press-conference, Lynch was peppered with questions about the film school, but responded that he himself had wasted much time in academia and could not emphasize enough the importance of learning by doing.

He was more eager to speak about transcendental meditation and the peace of mind it brought to him and to countless others.
To share these benefits elsewhere, Lynch also traveled to Kyiv last week to open a chapter of his Foundation in conflict-troubled Ukraine.

It’s likely, though, that Lynch’s cinema connections will hold the broader appeal in Georgia, where the local film industry is having a bit of a comeback.

Lynch became the biggest Hollywood household name to visit Georgia after Sharon Stone, who dropped by in 2011 for the opening of an action movie about the 2008 Russian-Georgian war. Then President Mikheil Saakashvili arranged such a grand reception for Stone that her name has been since used as a verbal noun ("შერონ სტოუნობა" or “sharon stoneoba”) to denote a hyped international visit.

So far, that hasn't happened with Lynch; at least, not yet.

Answering a reporter’s question, the director said that Georgia has not inspired any movie project in particular, but acknowledged that he thoroughly enjoyed the country, its people and, like many a visitor before him, the local culinary specialty, khachapuri.