The suicide of a man who was forced to flee Abkhazia 30 years ago has put the spotlight on the emotional and economic plight of hundreds of thousands of Georgian IDPs. 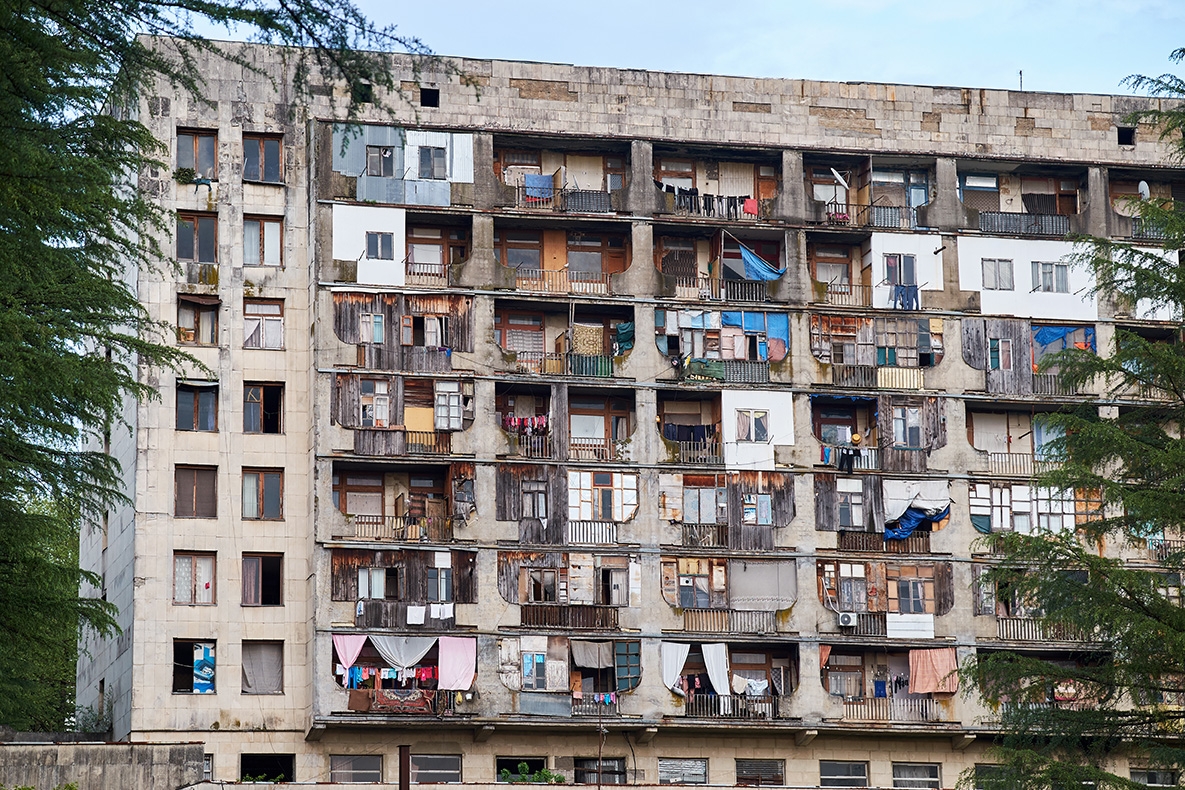 IDPs often live in abandoned hotels around the country like this one in Tsqaltubo. (Alvydas Kucas/Shutterstock)

A few years after war forced her from her home in her native Abkhazia, Sano Dzadzamia was out on a stroll with her boyfriend in Tbilisi. That frosty night of 1997 seemed conducive to romance, as the heavy snow softened the edges of the war-battered city, but Dzadzamia’s heart – already scarred by the loss of home and family – was about to be broken.

As they spoke, the boyfriend, who came from a status-conscious Tbilisi family, let out that it may not work out between them. “My mother does not like me dating a refugee,” he blurted out. After a moment of stunned silence, Dzadzamia rained a volley of slaps on his face and ran off.

It was not just a crushing end of a relationship, but a reminder that the struggle to find a new place to call home was far from over.

Now, twenty-five years later, Dzadzamia has her own apartment in Tbilisi, a job as an actress and a busy social life. But the search for home, even in a literal sense, still continues for many of those displaced from Abkhazia.

In mid-January, a man killed himself in Tbilisi after failing to convince the authorities to give him a decent place to live instead of the tiny room in the dilapidated shelter where he had lived since war ejected him, Dzadzamia, and hundreds of thousands of others from Abkhazia nearly three decades ago. The tragedy set off a national conversation about the place IDPs hold in Georgian society, and inspired many other displaced people to come forth to tell their stories. 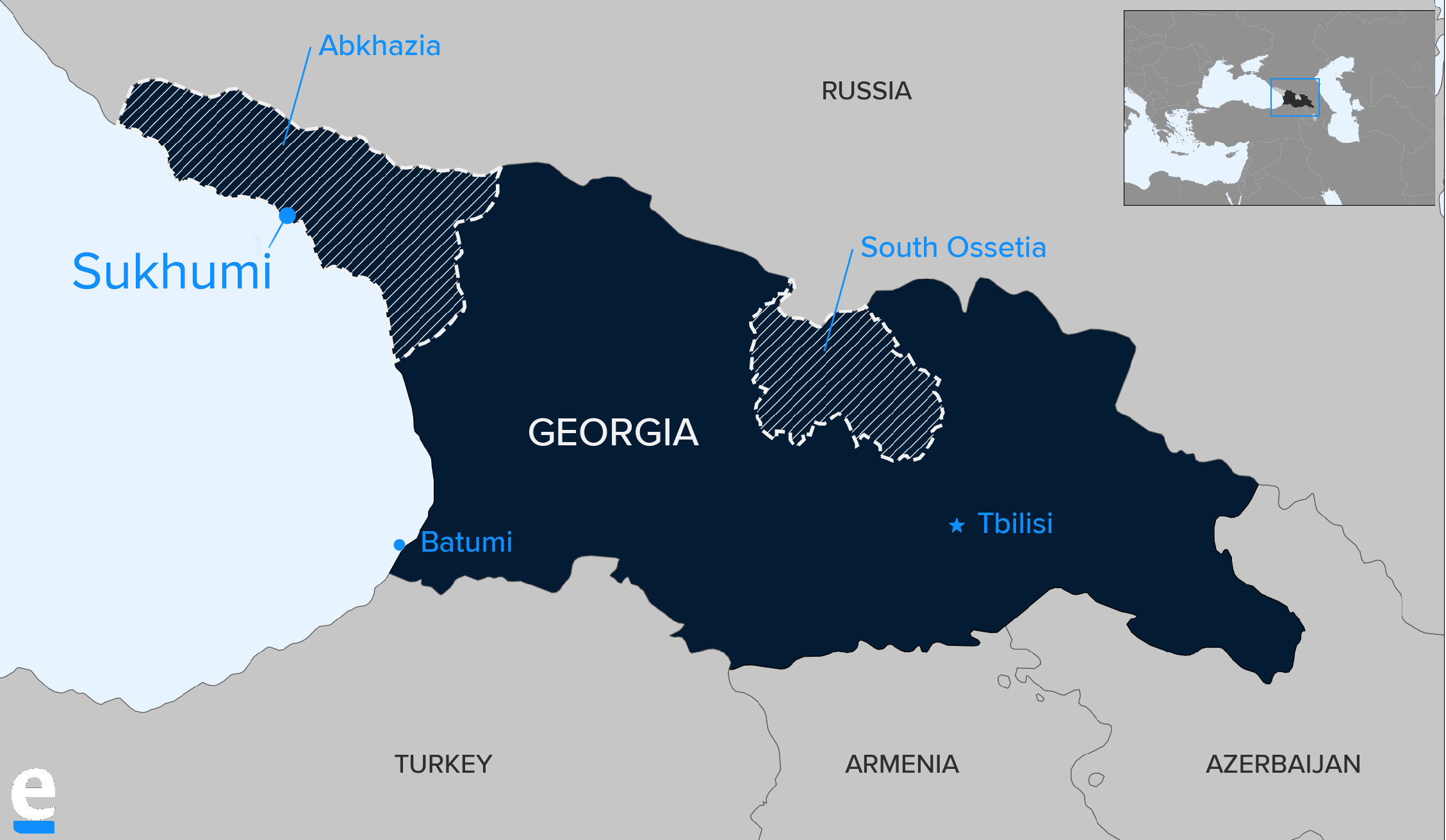 Dzadzamia was 15 years old when she managed to get on the last ship that carried Georgians out of her hometown of Sukhumi before the city fell to the Abkhazian forces in the culmination of the Georgian-Abkhaz war. She stood on a deck strewn with the wounded and watched as her city faded in the distance until it disappeared forever from her sight.

Clutching a crumpled piece of paper with the phone numbers of family friends and relations, she found her way to Tbilisi. Itself a site of a recent civil war, the city was only grudgingly making space for the thousands of arrivals streaming in from Abkhazia. Many of the displaced were forced to break into schools, hotels, hospitals and abandoned research facilities in search of a roof over their heads.

The city’s famous central hotel, Iveria, quickly turned into a multi-story slum. Rows of hanging laundry covered its façade, chimneys from wood-burning stoves peeked out of its windows and food from humanitarian aid packages sizzled on kerosene heaters in its fetid hallways.

Snobs took to mockingly pronouncing the Georgian word for refugee, “ltolvili,” with the soft ‘l’ of the regional accent characteristic to the displaced. Even when the word was uttered with compassion, many of the newcomers were put off to hear it applied to them, to realize that they were seen as foreigners in their own country.

Nino Ormotsadze still remembers the pang she felt when she overheard one schoolmate describe her as a refugee. “For 17 years of my life in Sokhumi, I had always been described as someone’s schoolmate, someone’s neighbor, someone’s cousin,” recalled Ormotsadze, who is now a communications manager in Tbilisi, using the Georgian version of the city’s name.

“And then suddenly I stopped being Nino’s daughter or Omari’s niece, someone’s neighbor, classmate, friend […] rather I was now part of a collective term ‘refugee,’ part of this new caste,” she said.

The adoptive city often acted like an evil stepmother to this caste, grudgingly letting it stay in a dusty basement and making plain, barely under its breath, the discomfort caused by the unwelcome new presence.

At a dinner conversation, a middle-aged man once reproached Dzadzamia for escaping Sukhumi, rather than holding the ground until the end. “So I was better off dying there, than to be living here,” she said. Ormotsadze recalled getting on a bus when the driver quipped that people should get in first, before refugees. “I knew that he said it because the displaced were not paying the fare, but it was still upsetting,” she said.

While attitudes have changed over years, echoes of this hostility remain. Ormotsadze heard a pair of female joggers in the privileged district of Vake complain how the displaced were getting the best jobs and the best guys in the city, narrowing job and dating options for native Tbilisians.

When she came to Tbilisi, Ormotsadze found the “refugee” label so maddening that she refused to formally get the status of an internally displaced person and the paltry state benefits that came with it. “It took a lot of work and patience to acquire a new identity, to again become someone’s classmate, neighbor, friend,” she said.

Similarly, many IDPs worked hard to find their way out of their improvised lodgings and get proper apartments, jobs and new friends. Attitudes have changed over time, and so did the city: Iveria, for one, is now a Radisson Blu hotel, the politically correct and relevant “displaced” is used instead of “refugee.” But many IDPs remain collectively packed away in crumbling structures in various nooks and corners of the country.

Dying to get out

It was a man from one such community, Zurab Kiria, who on January 16 jumped to his death from the top of his communal home, a Soviet-era sanatorium-turned IDP shelter.

The incident happened amid a series of protests by the building’s residents, who were demanding to be settled somewhere better than their rickety old tenement. Kiria, who fled to Tbilisi from his home in the Abkhazian town of Gudauta, had reportedly been increasingly frustrated by the lack of attention to the dire living conditions in his building, where over 100 households are crammed into claustrophobic, 40-square-foot rooms.

The sanatorium’s walls are wrinkled with cracks and mottled by dark blotches left by crumbling stucco. Sheets of cardboard barely prevent wind and cold from wheezing in, and rain often leaks its way into the dingy hallways. “We call this place ‘Titanic,’” one resident told RFE/RL’s Georgian service, because of how the building is inexorably sinking.

The building does stand by a large body of water, a whale-shaped reservoir known as the Tbilisi Sea on the city’s far outskirts. In 1993, when the displaced households first settled here, one key political figure of the time told the new tenants that they would feel at home there as it was on the “seaside,” even if the sea was artificial and the shore was nothing like Sukhumi’s subtropical beaches. “‘All you need to do is plant some palm trees around here and you are good to go,’ he told us,” one resident recalled in an interview with news channel Mtavari Arkhi.

Kiria’s death finally garnered the attention he was unable to attract while alive, and started a national conversation about IDPs and the place they hold in Georgian society.

There are over 286,000 displaced people registered in Georgia, the overwhelming majority of them people who fled Abkhazia in the early 1990s. Others fled the other breakaway region of South Ossetia. Nearly half of the IDPs live in communal housing and the majority eke out a living on state allowances. Only 5.5 percent of the 108,000 IDPs living in Tbilisi earn more than $410 a month, according to a 2018 report by the Tbilisi think tank Institute for Development of Freedom of Information.

Over the years, the government has moved many displaced households out of their crumbling collective homes or, alternatively, helped renovate these homes, the buildings’ structural condition permitting. But the process has been slow and plagued with controversies. “Tens of thousands of households are still waiting for their turn to receive accommodation and many of them live in conditions that are dangerous to their health and lives,” wrote watchdog organization Transparency International in a January 22 briefing.

Following Kiria’s death, the authorities offered to finance home mortgages for the residents of the derelict sanatorium, but the residents insist instead that the government purchase apartments for them. They say that they won’t be able to afford apartments in Tbilisi with the monthly payments the government is offering and that their long experience of facing broken or delayed promises makes them wary that payments may stop once the furor over Kiria’s death fades.

But the housing troubles are just part of a bigger picture, and the forgotten sanatorium is seen as an illustration of the broader issue of IDP communities’ continued alienation.

Ignored most of the time

Many IDPs feel that they are little more than a talking point during election campaigns, at international conferences and in news stories timed to war anniversaries, with little attention paid to the economic and social issues they face every day.

The displaced largely live in a parallel world, where they have their own governance system run by the Georgian-created Abkhazian government in-exile. The have their own theater, businesses and social networks. While all of it is essential to their livelihood, it also perpetuates the sense of being in a state of limbo.

“The bad living conditions aside, a life in collective homes means that you live by memories and can’t really move on,” Ormotsadze said.

Government policies have been primarily focused on reclaiming territories lost in the wars of the 1990s and sending the displaced back to their homes, and less on their inclusion in Georgian society. That approach is based on the belief that encouraging integration is a tacit admission that return to their original homes is off the table.

“[S]uccessive Georgian governments have done little to promote their [IDPs’] participation in politics. Instead they have encouraged the displaced to believe they will soon return, and stalled on taking action to secure them an effective political voice,” wrote Conciliation Resources, a UK-based peacebuilding organization. “Displaced people themselves also have feared integration as meaning giving up their right to return.”

“I’ve heard conversations that the government should stop paying benefits to IDPs, should stop treating us differently and even drop the term ‘IDP’ altogether, but this would simply mean erasing us,” Dzadzamia argued. “If there are no ‘displaced,’ then nobody owes us the property and land that we were robbed of. Our problem won’t go away. We will just formally cease to exist.”

The chances that Dzadzamia will ever see Sukhumi again appear bleak. The war wounds are too deep and raw on either side of the Enguri River, which forms the de facto boundary between Abkhazia and Georgia proper. Abkhazia is guarded by thousands of Russian troops, precluding any attempt by Tbilisi to enforce its jurisdiction over the region. The de facto authorities in Sukhumi are not amenable to the idea of letting Georgians return en masse, while many Georgians themselves say that would rather return on their own terms.

There is no easy resolution to the story of Georgia’s displaced and their collective identity crisis and quest for belonging. “You don’t really know who you are, don’t have solid ground under your feet,” one resident of the Tbilisi Sea sanatorium told Eurasianet. “The simple truth is that nearly 30 years have passed, but we are still guests in Tbilisi and we are still enemies in Sokhumi.”