Georgia’s doctors on the vanguard of vaccine hesitancy

A disengagement from the world medical community combined with conservative societal norms have led to many doctors shunning COVID jabs even as the wave of infections reaches new heights. 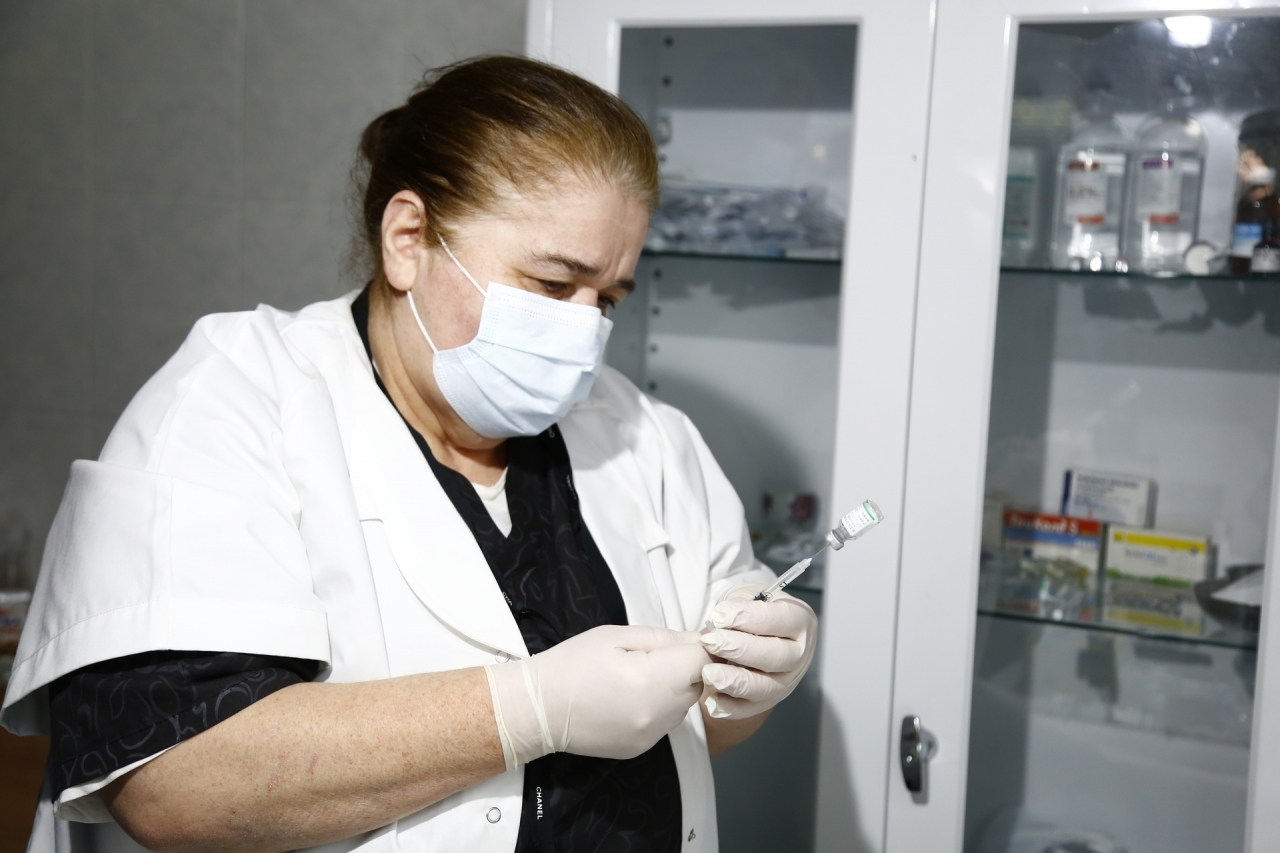 A Georgian healthcare worker prepares a dose of the COVID vaccine. (photo: Ministry of Internally Displaced Persons from the Occupied Territories, Labor, Health, and Social Affairs of Georgia)

As Georgia suffers through its worst COVID wave yet, and more than half the population remains unvaccinated, one group has stood out for its vaccine hesitancy: health care workers.

Nearly one-third of the nation’s healthcare professionals have not gotten the jab, according to data released by the National Center for Disease Control (NCDC) to the media. This includes nearly 3,800 physicians, about 17 percent of the country’s doctors, and the figures are even higher among nurses and medical assistants. By contrast, 96 percent of practicing physicians in the United States were fully vaccinated by June last year, according to a poll conducted by the American Medical Association.

But vaccination rates have remained persistently low, and combined with healthcare workers’ heavy exposure to the virus, that has led to them taking a disproportionate brunt of the pandemic’s blow. Healthcare workers, who make up about 1.3 percent of Georgia’s population, had recorded about 3.8 percent of the country’s registered infections through the end of 2021, according to data from the National Center for Disease Control (NCDC).

And it could be even more disproportionate now, given the disease’s current rampage through the country. With the arrival of the Omicron variant, Georgia has again entered the world’s top five in terms of per capita rate of transmission and deaths. As of February 18, the country had recorded more than 1.5 million total cases of the disease.

“We believe that share [of healthcare professionals among the total infections] has grown recently, following the major wave of transmission that started in January,” said Amiran Gamkrelidze, the head of the NCDC, at a February 8 briefing. “In January alone, we had 390,000 new cases. […] Based on this, we likely have an increase in the rate of infection among healthcare workers as they are at the front lines.”

But the heavy rate of infection has not been enough to defeat vaccine hesitancy. Some doctors told Eurasianet that they only got a single shot of the vaccine to allay pressure from their management and the authorities. Others went to great length to shirk the jabs altogether, even getting certificates documenting allergies to wriggle their way out of getting vaccinated.

“I’ve had COVID twice already – last spring and this January – so I told them [clinic management] to let me be and don’t force these vaccines on me,” said one rural doctor, speaking on condition of anonymity, who said he fears that COVID vaccines might have long-term adverse effects.

Some public health experts have been sympathetic to an initial hesitancy about the vaccines, which were created and rolled out at an unprecedented speed. In the beginning of the process, some doctors had “legitimate or partially legitimate reasons to question the validity and the amount of evidence on the effectiveness and side effects of rapidly developed vaccines,” said one public health expert, who asked not to be named because of the sensitivities her job entails.

But as time passed and detailed evidence on the vaccines’ effectiveness and safety accumulated, it began to appear that those misgivings were simply concealing a hidden antivaxxer within.

Some health workers have displayed surprisingly poor understanding of immunology and vaccinology in their rationalizations about the COVID vaccine, the expert said. “I’ve heard one doctor refusing the AstraZeneca vaccine because it was based on a chimpanzee virus,” she said, adding that using nonhuman primate viruses is “hardly news in the vaccine development technology.”

The persistent hesitancy is partly explained by lapses in education, said Zurab Tatanashvili, another public health expert. “Doctors need to constantly stay abreast of innovations in medical science, but many here don’t have access to reliable sources of healthcare news,” he said. “This is partly about the language barrier, but also some don’t have the habit of following such sources.”

In the vacuum created by a neglect of scientific evidence and international statistical findings, personal observations and word of mouth have swept in to fill the void.

“I’m skeptical of these [COVID] vaccines, as looking at my patients and people around me I certainly don’t see the proof of the supposedly miraculous efficacy that they talk about,” said one general practitioner in Tbilisi, who declined to be identified by name. “At the same time, I did observe some complications caused by the vaccines, but these complications are always being swept under the rug.”

Speaking via Facebook Messenger, she shared several videos and articles to back up the point. In these materials, a handful of Russian doctors criticized mRNA vaccines, alleging long-term complications and claiming these vaccines were attempts by Western pharmaceutical giants to profiteer on the pandemic.

Like many other skeptical healthcare professionals, this doctor took umbrage at the “anti-vaxxer” label. “I’ve given my children all the standard vaccinations and I myself have been immunized for measles, hepatitis, polio and so on, so please don’t give me this ‘antivax’ nonsense,” she said. “As far as I’m concerned, COVID vaccines are a global experiment and I refuse to be part of it, period.”

Faith also appears to play a role in promoting vaccine hesitancy in Georgia. Many Georgian priests have openly opposed the COVID vaccine, with some saying that the shots were but a trick of the antichrist to mark his followers ahead of the ever-looming apocalypse. Opinions like that can go a long way in a highly religious society like Georgia, where doctors’ offices often display more Christian icons than medical certificates.

“Clerics can carry a massive influence over their communities,” Tatanashvili said. “They are social referents, to use a behavioral science term, and deeply religious individuals turn to them for guidance and have a strong motivation to conform with their views, even if these views are odds with facts and common sense.”

Tatanashvili says he is worried about what the lack of trust in serious medical research among so many doctors says about the state of healthcare in Georgia. “Today, world medicine supports and recommends COVID vaccines,” said Tatanashvili. “If you snub leading medical thought – the findings of robust, evidence-based and peer-reviewed research, the recommendations of the leading healthcare institutions like the World Health Organization, [U.S.] CDC and FDA – then where do you get your information on which you base your medical practice?”