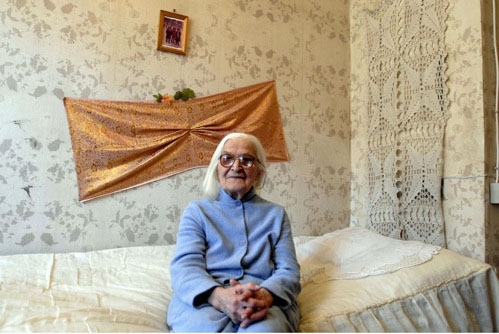 Olgha Machitadze, 91, is one of Georgia's many real nonagenarians. (Photo: Molly Corso)

Recent publicity about an allegedly 129-year-old woman living in a mountain village in western Georgia has revived the country's Soviet-era reputation for hale and hearty centenarians. But data collected by experts in Tbilisi suggest that Georgia is not exactly a Garden of Youth.

The country first gained notice in the United States for its population of octogenarians and nonagenarians with a 1977 Dannon yogurt commercial that touted several robust elderly residents' love of yogurt. (The ad was filmed in Abkhazia, a disputed region now outside Georgia's control).

Vodka-drinking, backgammon-playing Samegrelo villager Antissa Khvichava -- reported to be turning 130 this summer - at first glance appeared to reaffirm the popular notion that Georgians, somehow, live longer. If her age is verified, Khvichava would rank as the oldest woman in the world by a 15-year margin. The current certified titleholder is a 114-year-old woman living in Japan.

But doubts exist that Khvichava's claim will hold up to scrutiny.

Georgia's Civil Registry Agency has presented a birth certificate from 1880 and a document from a 1980 special commission that investigated her age as proof that Khvichava is 129. The country's official statistics on life expectancy, birth rates and death rates, however, are notoriously incorrect, stressed Avtandil Sulaberidze, director of the Institute of Sociology and Demography in Tbilisi.

National data depends on the local registration of births and deaths -- numbers that are often wrong, Sulaberidze said. Residents often submit false information, or withhold information in an attempt to secure pension payments and other government handouts, he claimed.

With those limitations in mind, one Tbilisi gerontologist has assembled his own collection of population data over the past 30 years.

Simon Dalakishvili, head of the department of gerontology and palliative medicine at the Natishvili Institute of Morphology in Tbilisi, states that Georgia has slightly fewer than 500 centenarians. (The number does not include the disputed regions of Abkhazia or South Ossetia.) The country contains eight individuals over the age of 115, he said. The figures, which Dalakishvili claims are unchanged since Soviet times, represent far less than 1 percent of Georgia's official general population of around 4.6 million.

By comparison, two US states with roughly similar population sizes - Minnesota and Louisiana - contained 1,044 centenarians and 804 centenarians, respectively, in the 2000 census.

Most of Georgia's centenarians, like Antissa Khvichava, live in rural communities, where family support systems for the elderly are still strong, and diet depends less on processed food.

Nonetheless, Dalakishvili says that he "doubts" that Khvichava has lived as long as 129 years.

"I am not interested in people living until age 150 because I know in advance that is not true; I am interested in those who live until 120, 115, 110. That gives us more information how to create the social conditions to help people. That is the most important," he said.

"We get, in general, within four to five years [of the correct age] . . . With that methodology, we get close. If it turns out that a woman gave birth at age 80, it is immediately clear that it is not true," Dalakishvili said.

Genetics plays roughly half the reason for a person's long life, he believes; the rest goes to diet and quality of life, among other factors. No proof exists to establish that matsoni, the Georgian yogurt touted by Dannon, contributes to that process, he added. Much more than yogurt is needed to correct current demographic trends.

Demographer Sulaberidze points out that Georgia's overall population is shrinking. The population increased by a mere 1.8 percent in 2008 - a jump credited by Sulaberidze to Patriarch Ilia II's pledge to be the godfather of every family's third child; by comparison, in 1960, it allegedly grew by 15.2 percent, the United Nations Population Fund reports.

In 2008, life expectancy stood at 66.4 years for men and 75.3 years for women, according to the Fund. Ninety-five-year-old scientist Nino Javakhishvili, however, cautions that there is "no secret" to a long life. Javakhishvili is a nationally renowned experimental human anatomist who still goes to her Tbilisi office four days a week, conducts experiments on rats and is planning on publishing a book on her research into diabetes. She can read without glasses and download photos into her cell phone.

Her advice for becoming a nonagenarian is straightforward: "Do everything in moderation," she said.