The former president has been hospitalized for months. 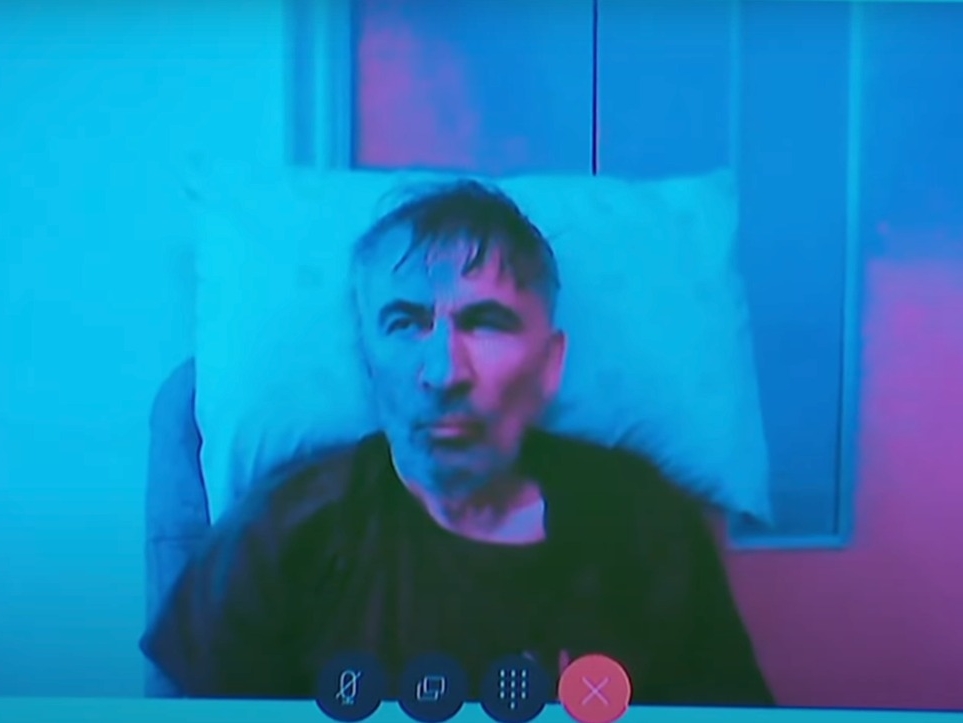 A screengrab from the courtroom monitor showing Saakashvili on December 22.

The hearing, Mikheil Saakashvili’s first live public appearance in months, was to consider a motion by his lawyers to have his sentence deferred so he could be treated abroad. Saakashvili attended via live feed from Tbilisi’s Vivamedi hospital, where he is currently being treated for a variety of ailments that Georgian doctors say cannot be properly diagnosed in the country.

In a dramatic exchange that ended with the live feed being cut and without a ruling, Saakashvili’s lawyers tried to use the appearance to draw public attention to his condition.

“I want to ask Mr. Mikheil Saakashvili to stand up and lift up his shirt for the public and you, Mr. Judge, to see the condition Mikheil Saakashvili is in,” Shalva Khachapuridze, Saakashvili’s lawyer, said while addressing the court. “This is about the same condition in which the Azov battalion boys were in as they were released [from Russian captivity],” he added, comparing the former president to Ukrainian POWs.

The judge responded that he would cut the feed if Saakashvili tried to undress. Saakashvili then began to speak in Ukrainian, a language he knows from his days as a student and government official in that country. The feed was cut as an interpreter was sought. Later the defense said Saakashvili was too unwell to resume the session.

Saakashvili was jailed by Georgian authorities immediately after his return to the country last fall following years of exile in Ukraine. He had been sentenced in absentia to six years in prison on two abuse of power charges and is currently standing trial on charges of embezzlement and abuse of authority related to a crackdown on protesters in 2007. He was also charged with illegal border crossing after his return.

His health began to deteriorate after a 50-day hunger strike that he began on the day of his arrest.

For weeks, Saakashvili’s doctors have advised against the former president attending his trial in person, citing his worsening condition. On December 14, Georgia’s penitentiary service denied requests for a virtual hearing, citing a lack of equipment in the hospital. Later that day, authorities released a compilation of video recordings showing Saakashvili in his hospital room, alleging he was faking the illness. The footage, however, drew widespread criticism for appearing to breach the patient’s privacy, with many claiming the images only confirmed Saakashvili’s poor condition.

Earlier this month, Georgia’s then-public defender Nino Lomjaria said her office would recommend deferring Saakashvili’s prison sentence, basing the recommendation on a report from a group of independent doctors assembled by her office. The doctors say his condition is characterized by multiple complications, including, among others, rapid weight loss, fevers, cachexia (a syndrome associated with muscle loss), cognitive and motor impairment. Saakashvili may have only two or three months before the life-threatening damage becomes irreversible, the doctors warned.

The Georgian government is facing growing scrutiny, including from Western allies, over Saakashvili’s condition, repeatedly defending itself from accusations of providing improper medical care. The European Union and the United States have repeatedly said the Georgian government is responsible for Saakashvili’s health, while the EU Parliament called for his transfer abroad for treatment “on humanitarian grounds.”

Ruling party leaders, however, continue to question Saakashvili’s condition and his sincerity.

“Doctors and the state want Mikheil Saakashvili to be healthy so that he can serve his remaining five years for crimes he has committed,” Shalva Papuashvili, chairman of the Georgian Parliament, said on December 22. “But he wants to get weaker in order to somehow evade justice.”