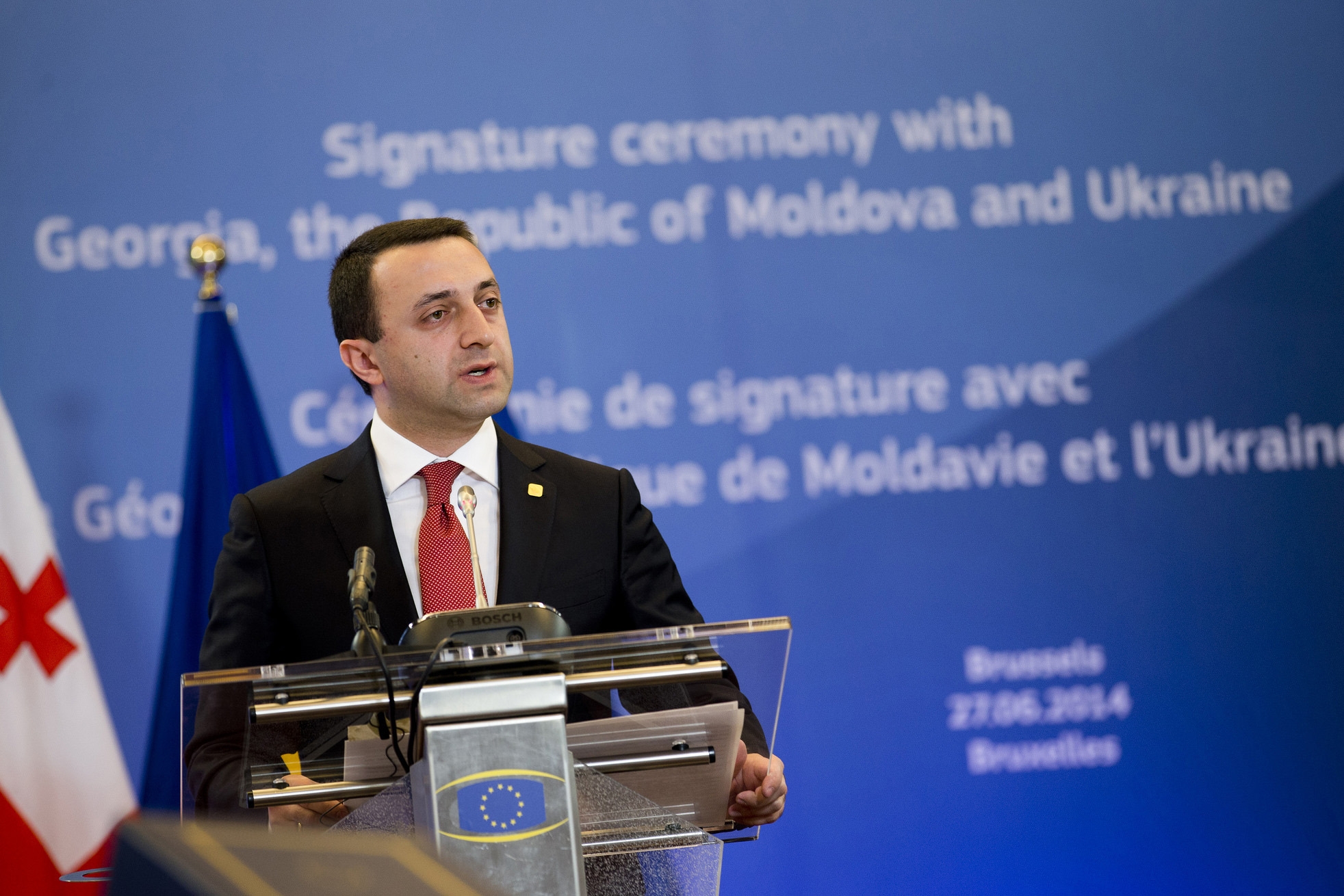 For many in the South-Caucasus country of Georgia, the signing of landmark pacts on June 27 with the European Union means that it finally has escaped from being relegated to Russia’s backyard.

Yet for all the relief that Tbilisi’s attempts to join “the European family of nations” are finally paying off, challenges remain. The sweeping political and economic agreements do not come with a promise of EU membership and could invite some sort of Russian retaliation.

Nonetheless, Georgian Prime Minister Irakli Gharibashvili on June 27 only saw the positive. “Generations of Georgians spent lifetimes hoping to see this day,” Gharibashvili said in Brussels as he signed an association agreement and free-trade agreement intended to get Georgia EU-membership ready in areas ranging from trade to law-enforcement.

EU officials, who also signed deals with Moldova and Ukraine, did not contradict him. European Commission President José Manuel Barroso repeated comments first made on June 13 that the association-agreement is “not the end of the road.”

The EU predicts that its lifting of import duties will result in Georgia earning an extra 6 million euros [$8.18 million] per year from agricultural exports, and, along with a pickup in investment, will lead to a 4.3-percent hike in the country’s economic growth rate. In 2013, Georgia’s economy expanded by 2.4 percent, according to official data.

These benefits won’t come before Georgia completes massive reforms to harmonize its political system and regulations with those of the EU, analysts caution.

The agreements “will be a boon for Georgia, but only in the medium to long term. No one expects there to be big economic benefits in the short term and, actually, there will be painful regulatory burdens to undertake,” South-Caucasus expert Tom de Waal, a senior associate at the Carnegie Endowment for International Peace in Washington, DC, wrote in an email interview.

The tougher regulations cover an array of areas, from food safety to good governance. To soften the transition, the EU this year will allocate roughly 90 million euros (about $122.7 million) to the Georgian government, European Commissioner for Enlargement and European Neighbourhood Policy Štefan Füle told EurasiaNet.org in May.

Tbilisi, however, does not need to be sold on the idea of closer ties with Europe. For Georgia, the two agreements are mainly about a sense of belonging and achievement. From medieval monarchs to pre-Soviet and post-Soviet governments, many Georgian leaders tried to reach out to Europe, and now, the thinking goes, realizing that goal is within sight. “The most important thing is the symbolism: the signing ceremony in Brussels shows that Georgia will have a ‘European anchor,’” commented de Waal.

The symbolism was so important that the country’s 31-year-old Prime Minister Gharibashvili and 44-year-old President Giorgi Margvelashvili haggled over who would sign the agreements. The Georgian public, ever conscious of its reputation in the West, cringed in embarrassment as it watched an awkward power-struggle unfold on TV between the two. In the end, President Margvelashvili deferred to Prime Minister Gharibashvili.

The signing also carries symbolism for Moscow, Georgia’s onetime overlord. Both the EU and Georgia had been bracing for headwind from Russia, but on signing day, despite earlier talk of possible consequences, the Kremlin was largely silent. And during the run-up to June 27, Georgia saw only feeble opposition by marginal pro-Russia groups. Without elaborating, officials in Tbilisi claimed they had received assurances from Moscow that the Kremlin will not try to disrupt Georgia’s Euro-integration process.

“Moscow’s apparent change of mind about this signing means that it does not see the agreement as threatening to its core interests,” commented George Hudson, a Eurasia regional specialist at Wittenberg University in Springfield, Ohio.

The Kremlin-run RIA Novosti news agency, though, had a different take. On June 26, it described the EU agreements as intended to cause a “rupture” in the signatories’ ties with Russia. In addition, Foreign Minister Sergei Lavrov has stated that Moscow will take “protective measures,” if it thinks that Russia’s economy will suffer as a result of Georgia’s westward leanings.

Many Tbilisi analysts read that as another embargo threat, but one veteran diplomat urged Georgians to avoid doomsday predictions. “Some conditions may change. Russia may make attempts to review the terms of trade. … But at this stage, I don’t expect a total cutting of trade,” said Zurab Abashidze, a former ambassador to Russia and Georgia’s point man for dealings with Moscow, news outlets reported.

For all of the assurances, concerns persist that Moscow will indeed try to interfere. Breakaway South Ossetia’s recent announcements about holding a referendum on joining Russia evoked comparisons with the separatist battles in Ukraine and prompted Georgian Defense Minister Irakli Alasania to caution against falling for a Russian-planned provocation.

In a June 26 commentary for the Carnegie Moscow Center, analyst de Waal focused on another risk. Moscow could try to encourage anti-EU sentiment, he wrote, by looking to “friendly businesses, non-governmental organizations and elements” in the Georgian Orthodox Church, and milking “inevitable disappointment that the new free trade agreement with the EU is not providing instant relief from high unemployment.”

For now, with 77 percent of 3,942 Georgian respondents in one recent poll expressing support for EU integration, Russia would face a steep, uphill struggle to turn Georgian public sentiment against the EU.

But as Wittenberg University’s Hudson noted, the move toward the EU “is a delicate dance, demanding artful diplomacy.” How it will end remains an open question.

Giorgi Lomsadze is a Georgia-based journalist who is a frequent contributor to Eurasianet's Tamada Tales blog. Lomsadze attended a May 21-22 trip funded by the European Union's Media Neighborhood Project, meant to explain the workings of EU institutions and the EU's relations with Georgia and other members of its Eastern Partnership Programme.