During lockdown, delivery drivers are risking their lives to escape debt. 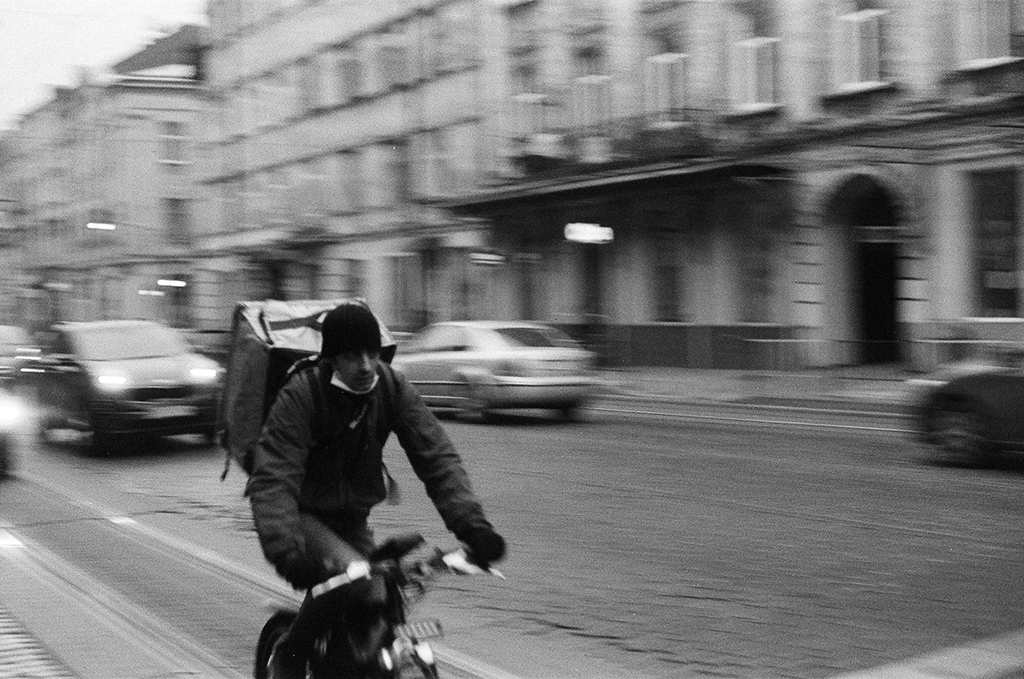 Careering through tight traffic, Zaza steered his scooter into the oncoming bus lane and hit the gas. A car ahead made a sudden turn, blocking his way. In a split second, bang, the world went dark.

When he came to, Zaza could not believe the pain in his right leg. People fussed over him, telling him not to move. His scooter lay nearby, mangled into junk. He remembers seeing his yellow delivery backpack emblazoned with word Glovo, a popular on-demand courier service in Georgia. “My first thought was that the burgers I had to deliver were probably all messed up,” Zaza said.

Before the accident, Zaza was close to clocking 180 orders a week and securing a bonus payment of 350 lari (about $112) from Glovo, he said. Without the bonus, couriers only get 65 cents per order plus 6 cents per kilometer.

It is in their chase after bonuses that couriers gallop across Tbilisi, riding their scooters everywhere to deliver as many orders as they can. A crushed scooter is not a rare sight in the city. People like Zaza – who was laid off from his previous job at the start of the pandemic – have an extra reason to burn rubber: debt.

“After we got married, my wife and I bought a studio in Dighomi [a Tbilisi suburb] in 2018. It’s a 10-year mortgage,” said Zaza, who worked as barista until his restaurant closed last fall. It’s a familiar story: Georgia has a debt-to-GDP ratio among the highest in Europe. And Georgians pay interest rates unheard of in the West.

A courier job appeared to be the only option; delivery services were among the few businesses left afloat during the economic meltdown. To both consumers and the unemployed, apps allowing on-demand ordering – like Glovo, Bolt and Wolt – became indispensable.

These international networks dominate Georgia’s delivery market, which had already been booming for a few years. In 2019, the Georgian subsidiary of Spain-based Glovo posted roughly $2.3 million in revenue, a whopping 24-fold jump from the previous year, according to the company’s tax filings.

Maya Mateshvili, a resident of the capital, was spared the slog of Georgia’s social-distancing-challenged shops thanks to the apps, with which she ordered everything from food to electronics to flowers. The services “were one of my biggest and best coping mechanisms,” Mateshvili told Eurasianet. “Without them, I would have probably developed a permanent twitch or shaved my head.”

Starting early last year, Mateshvili and her teenage daughter began using Glovo, though they also “branched out” to local services like Soplidan.ge and Javakheti Group, which specialize in produce and dairy, respectively.

On the other side of the apps are many of Georgia’s newly unemployed and furloughed. With government aid modest, many got on scooters and joined the race.

“At first, I felt I was the slowest guy there. Unlike everyone else, I was afraid to ride on the sidewalks or in the bus and bicycle lanes, so I wasn’t making much money,” said Zaza. “But I had to speed up to make ends meet because we could not survive on the government aid alone.”

During the pandemic lockdowns, the authorities offered between 200 and 300 lari ($63 to $94) a month to those who lost all or part of their income.

“That aid was below what’s needed for substance in Georgia,” said Salome Kandelaki, a researcher with the Georgian Institute for Politics, a think tank. The aid was just over the government-defined monthly subsistence minimum of 187.7 lari ($56), but Kandelaki has shown that essentials cost more than the state estimates.

With other sectors crumbling, the gig economy took in much of the labor force in 2020, though there is little information available to estimate the size of this informal sector in Georgia.

This is partly because it is unregulated, which many see as troubling for labor rights. Earlier this year, scores of Glovo and Bolt Food couriers went on strike protesting changes in the fee structure. “We have no protections, no stability guarantees, no insurance,” Zaza said. “To make this job worth your time, you just have to ride like crazy until you crash into something.”

“If you complain, the company can just ban you from the system,” he said, referring to claims that Glovo sacked some couriers for striking. He refused to give his full name fearing that he could be banned from the platform, too.

Fortunately for Zaza, state healthcare covers emergencies for the self-employed, which is how delivery couriers are categorized, but he has had to pay out of his pocket for the ongoing treatment of the broken leg. After he recovers, he intends to get back on the road: “Compared to working in a restaurant, being a courier is a very stressful and unsafe job, but I really don’t have other options.”