The ruling party, apparently fed up with President Salome Zourabichvili’s outspoken support for Ukraine, now says it will appeal to the Constitutional Court because she has overstepped her duties. 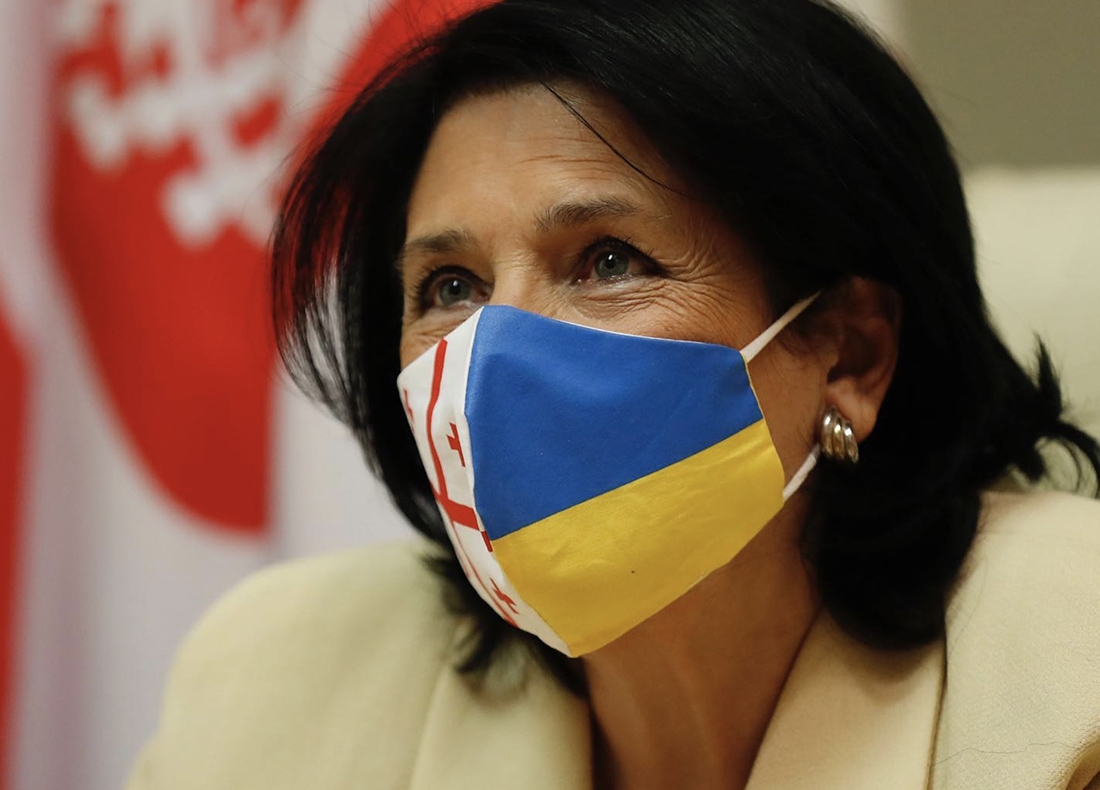 When Georgian President Salome Zourabichvili appeared in parliament on March 14 to deliver her annual state-of-the-union address, she was wearing a Ukrainian-themed facemask and was accompanied by Ukraine’s chargé d’affaires, Andrii Kasianov.

While gestures like that have become common in many of Ukraine’s allies since the Russian invasion was launched at the end of February, in Georgia it was a signal of defiance to a government that, in the eyes of many Georgians, has not done enough to stand by its Ukrainian friends.

Before she could even begin her speech, she was interrupted by a member of parliament and executive secretary of the ruling Georgian Dream party, Mamuka Mdinaradze, who objected that the presence of the Ukrainian diplomat was “awkward” and a sign of “lack of respect” for the parliament.

When Zourabichvili finally took the podium, she began with an emotive description of the havoc Russia is wreaking in Ukraine. “The heroic fight of the Ukrainian people against the Russian aggression can only elicit respect, solidarity and support,” she said. “Georgia stood and stands by Ukraine and the Ukrainian people.”

It is that kind of straightforward rhetoric that has put her at odds with Georgia’s government, whose support for Ukraine has been so lukewarm that Kyiv recalled its ambassador in protest, leaving Georgia with only Kyiv’s chargé.

Zourabichvili, by contrast, has been offering support to the tens of thousands of protesters demanding their government give a stronger response to the war in Ukraine. She traveled herself to Paris and Brussels to help along Georgia’s snap application for European Union membership and to publicly dispel doubts about where Georgia stands vis-a-vis Ukraine and Russia.

During one interview she distanced herself from the controversial statement of Georgian Prime Minister Irakli Gharibashvili, who categorically ruled out Georgia joining international economic sanctions against Russia, dismissively pointing out that the war was taking place on foreign territory.

“I don’t think that a statement of that kind makes much sense today,” Zourabichvili told France 24. “I would not have done such a statement.”

The address to parliament appears to have been the last straw, and the next day Georgian Dream hit back: It announced plans to take her to court, arguing that the trip to Europe – which the party said was taken without approval from parliament – had overstepped her largely ceremonial powers.

The party also described as a “gross violation of the constitution” Zourabichvili’s alleged refusal to approve government-nominated candidacies for several ambassadorships. It said it planned to appeal to the country’s Constitutional Court “to request confirmation of the violation of the Constitution by the President of Georgia.”

The case inspired jokes that Georgia was getting ready to put another president in prison – former president Mikheil Saakashvili is already in jail on a variety of charges. But the suit involving Zourabichvili instead appears geared toward limiting her ability to challenge the ruling party’s policies in the future rather than in meting out legal punishment.

“We are talking about a complaint that aims to verify facts and clarify who has what powers,” Mdinaradze told reporters.

While constitutional lawyers dispute the legal merits of the case, many have suggested that the suit is a political attempt to silence, if not remove, the increasingly independent president. Mdinaradze denied accusations that Georgian Dream was planning to try to impeach the president based on the outcome of the case. The party does not have enough seats in parliament to launch an impeachment procedure by itself.

In a parallel development, the party introduced an amendment to the constitution that could help the majority take legal action against the president more directly. In an analysis of the case, the rule-of-law watchdog Georgian Young Lawyers’ Association said that the Constitutional Court can now only review the legality of the president’s official decrees, not of her actions. The new amendment would change that.

“The initiation of the bill by Georgian Dream clearly suggests an attempt to settle scores with the president,” the group said.

During its nearly 10 years in power, Georgian Dream has pushed out many figures from both its parliamentary coalition and the executive branch for refusing to toe the party line or appearing to be potential threats to the party’s rule.

Now Zourabichvili – who entered office under the suspicion that she was merely a puppet of the behind-the-scenes ruler of the country, Georgian Dream’s billionaire founder Bidzina Ivanishvili – has emerged as such a threat.

Her public approval soared recently, with opinion polls from early March by the Caucasus Research Resource Centers showing that her net approval rating in dealing with the Ukraine war is 48 percent, as compared to 2 percent for Prime Minister Irakli Gharibashvili. Those polls were taken before the speech in parliament, which likely further boosted her popularity.

Zourabichvili could be following in the footsteps of her predecessor, Giorgi Margvelashvili, whom Ivanishvili also initially backed before turning on him for developing an independent streak. Ivanishvili ended up describing Margvelashvili as his biggest mistake. Now the question is, will Zourabichvili be an even bigger mistake?