Facebook has pulled the plug on a fake news operation in Georgia that had been capitalizing on the coronavirus pandemic to sway public opinion in favor of the government. 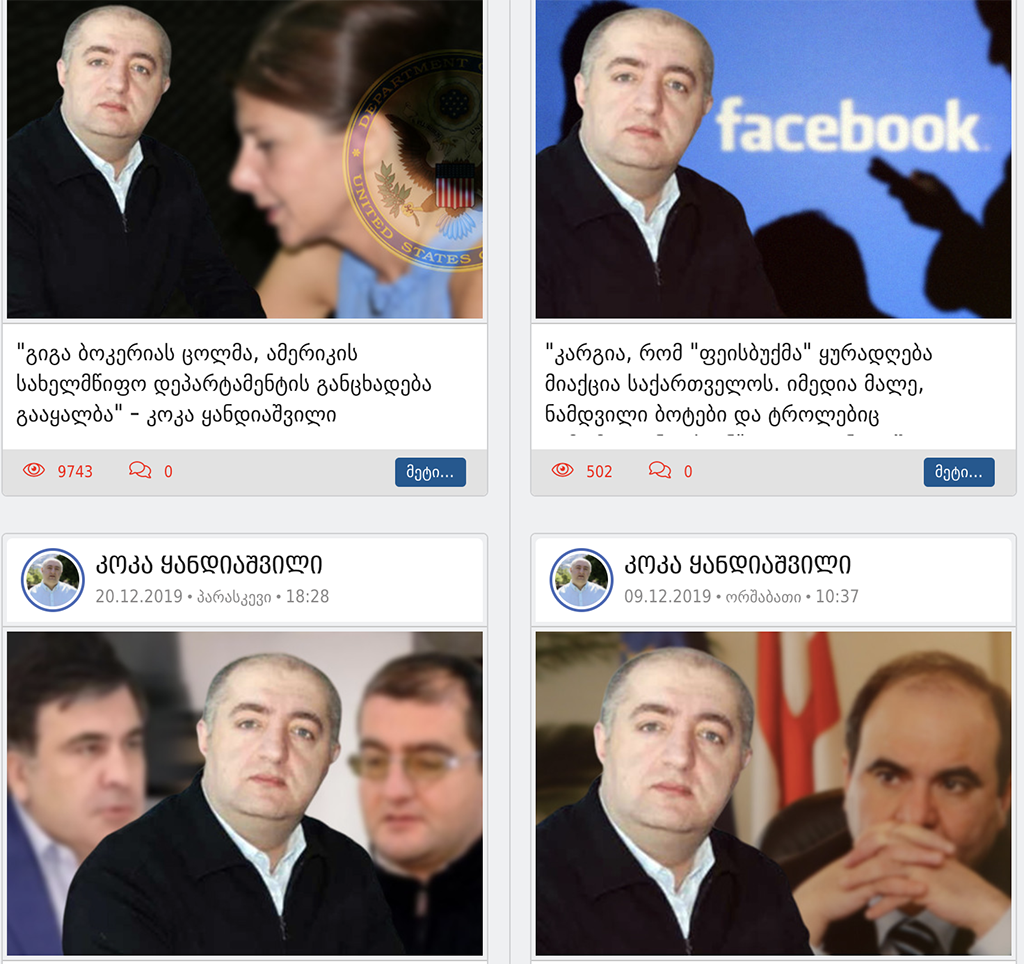 Here, there and now nowhere. Screenshot of Koka Kandiashvili on the Espersona website.

“What’s going on?” Koka Kandiashvili would begin his once-popular Georgian TV show. His fair, blue-eyed face regularly appeared during primetime to pose that question to politicians and celebrities. The show was leisurely paced, leaned towards the frivolous, and openly favored President Eduard Shevardnadze. But Georgia had poor news and entertainment options then, and Kandiashvili became a household name. “What’s going on?” people often joked, imitating Kandiashvili’s affected manner.

The 2003 Rose Revolution knocked Shevardnadze out of power and Kandiashvili off the air. The new president, Mikheil Saakashvili, took firm control of national broadcasts and national narrative. His predecessors’ loyalists were largely pushed out of political and media mainstream. The “What’s going on?” show and the era it stood for faded in the national memory along with the show’s host.

A decade later, when it was Saakashvili’s turn to be pushed out of power, Kandiashvili reappeared to tell Georgia what was going on again, albeit this time, it is alleged, as the mysterious czar of internet trolls.

In 2013, a year after billionaire Bidzina Ivanishvili and his Georgia Dream party took over leadership in Georgia, Kandiashvili was appointed to head the government’s public relations efforts. Later that year, he left the position to serve as a government consultant.

Opposition groups and democracy watchdogs have long claimed that Kandiashvili’s real job was to run a shadow department of disinformation akin to Russia’s troll farms. He was alleged to run a vast network of bots and trolls, all working to vilify government critics. Kandiashvili denied it, but the allegations gained more credence last week when Facebook suspended hundreds of Georgian pages, groups and accounts linked to Kandiashvili’s media company Espersona (“This Person”).

“We removed 511 pages, 101 accounts, and 122 groups, and 56 Instagram pages” involved in a coordinated inauthentic activity in Georgia, Facebook said May 5 on its global efforts to clean out disinformation from its social networks. “Our investigation linked this network to Espersona, a media firm in Georgia.”

Facebook also suspended Kandiashvili’s personal account and his fan page, plus an account allegedly run by his ex-wife, Nona Kandiashvili, who also served Georgian Dream as head of the government’s press office.

On the same day Facebook announced it had taken down the accounts, the Atlantic Council’s Digital Forensic Research lab offered more details on the network associated with Kandiashvili. “The assets connected to Espersona impersonated Georgian health authorities and political opposition members and sought to discredit pro-democracy activists and members of opposition,” the DFRlab wrote.

Espersona’s campaign appeared to capitalize on the coronavirus pandemic to sway public opinion in favor of the ruling party. To attract larger audiences, the network’s accounts impersonated doctors and virologists, who are at the frontlines of Georgia’s fight with COVID-19 and enjoy a great deal of public trust. One fake account impersonated popular doctor Levan Ratiani, director of a clinic at Tbilisi State Medical University. Ratiani is part of a cohort of health professionals leading the coronavirus fight and appears on television daily to provide updates on the epidemiological situation.

DFRlab said that the network included accounts impersonating opposition leaders and also fringe news portals sharing pro-government content. Many of these news portals were created on the same day and had nearly identical interfaces, DFRlab wrote. Some of the pages in the network focus on sports and entertainment. “[T]hese pages may have been in an audience-building stage, trying to attract a large number of followers before pivoting to a more political content at a later date,” DFRlab said.

Kandiashvili dismissed the accusations as “lies” in a statement published on Espersona’s website. “I have not been in public service since 2014. I have never been an employee of the Georgian Dream, though everyone knows that I get actively involved in election campaigns. I was an ardent supporter of the Georgia Dream from the very beginning and will remain so in future.”

He claimed that Facebook’s decision was influenced by reports by non-profit groups that he linked to the largest opposition party, the United National Movement, which is loyal to ex-president Saakashvili. Facebook however also took down dozens of accounts, pages and groups associated with the United National Movement, indicating that the opposition party also practices disinformation campaigns though not quite on the scale of the ruling establishment.

Facebook appears to have targeted Russian influence operations in Georgia as well. The network pulled down profiles and pages that served as audience amplifiers for Russia’s Sputnik news network. International Society for Fair Elections (ISFED), a Tbilisi-based democracy watchdog, discovered 37 likely inauthentic accounts and 41 groups dedicated to spreading Sputnik’s content “in an organized and suspicious manner.”

While Moscow’s reliance on covert social media operations to promote its interests domestically and globally has been well-documented, the Georgian government’s use of similar strategies to undermine the local opposition only gained attention recently and is casting a pall on the country’s reputation as a promising democracy. Last December, Facebook did its first large-scale clean-up of activity in Georgia, removing hundreds of pages and many accounts.

“Although the people behind this activity attempted to conceal their identities and coordination, our investigation linked this activity to Panda, an advertising agency in Georgia, and Georgian Dream-led government,” wrote Nathaniel Gleicher, head of Facebook’s security policy, at the time.

The large scale of exposures in Georgia can be partly explained by the fact the country has several professional watchdog groups dedicated to tracking and debunking disinformation campaigns. Also, ISFED linked the apparent spike in Facebook trolls and bots to the parliamentary elections, scheduled this fall.

“We are practically certain that all of this served electoral and campaign purposes,” Mikheil Benidze, ISFED director, told Eurasianet. “Manipulating information on social media to influence public opinion has become a major tool of political and campaign battles,” he said, adding that ISFED saw a spike of such activity during presidential elections in 2018.

Facebook is also, by far, the nation’s favorite networking site – the use of Twitter and other networks remains marginal – and the second most popular source of news in Georgia, according to CRRC, a pollster. The battle for voters still primarily happens on TV, the dominant news medium. But if someone like Kandiashvili wanted to tell the nation his perspective of what’s going on, Facebook would be his second-best bet.