The dramatic exit was the latest turn in the saga in the ownership struggle for the opposition TV network Rustavi2. 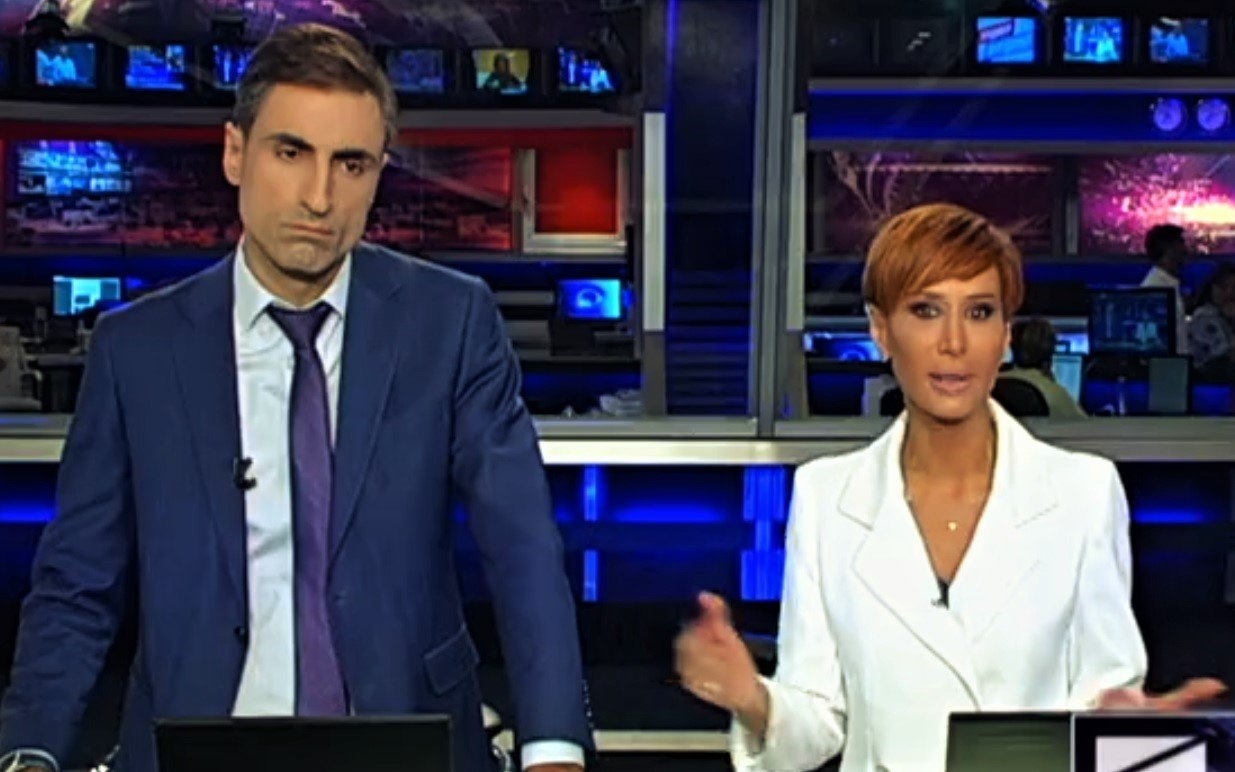 A screenshot from the last broadcast of Kurieri, the flasghip news program of opposition network Rustavi2, before they walked off the job to protest what they said was looming government censorship.

The hosts of Georgia’s top news show, Kurieri, walked off the job during a live broadcast to protest what they called a looming government takeover of their television network, Rustavi2.

“For 13 years I’ve been greeting you from this studio and today I’m more nervous than I was when for the first time I said ‘This is Kurieri at 9,’” said news presenter Diana Jojua during the show’s August 20 evening broadcast. “Now I have to say goodbye.”

She alleged that the billionaire leader of the country’s ruling Georgian Dream party, Bidzina Ivanishvili, was planning to take over the opposition-minded network and turn it into his mouthpiece.

“We have fought hard but Bidzina Ivanishvili has finally occupied Rustavi2 and free speech was taken away from us,” Jojua said. “Good luck to everyone here at Rustavi2 and to the person who will take my seat.’”

“This is the end for me as well,” added co-host Mikhail Sesiashvili. “The fight for a better future and a free Georgia continues,” he said. The pair then walked away on camera.

The newscasters’ demarche followed the firing of the station’s news executive, Nodar Meladze, as well as a number of prominent hosts, by the network’s new owner, Kibar Khalvashi. Khalvashi, who is widely suspected of fronting for the interests of Ivanishvili and Georgian Dream, was restored as Rustavi2’s owner last month by a Georgian court after a protracted legal battle.

Meladze claimed that an Ivanishvili representative approached him recently to propose editorial changes to Rustavi2’s broadcasts. “He said he does not want to turn Rustavi2 into Imedi [a pro-government news network] and that some measure of government criticism would be allowed,” Meladze told reporters. Meladze nevertheless declined the offer and was fired, he said.

A group of democracy and free media watchdogs, including Transparency International Georgia and Media Development Foundation, issued a joint statement criticizing the moves against the network: “[I]t is beyond doubt that that dismissal of leading journalists at Rustavi2 on vague grounds is actually [about] a change of the editorial policy of the channel,” and it “will negatively affect the freedom of the press, as well as democratic development of the country,” they said.

Journalists and managers forced out of Rustavi2 plan on starting a new station but have accused the government of trying to foil their plan. The authorities have brought charges of fraud against a businesswoman who discussed selling a potential headquarters for the new channel with the former director of Rustavi2, Nika Gvaramia. Khalvashi said he also intends to sue Gvaramia and Meladze for managerial decisions that he alleges damaged Rustavi2 financially.

Ivanishvili is only the latest Georgian leader to try to wrest control of the influential channel. Late president Eduard Shevardnadze was first to try shut it down, a move that eventually cost him his presidency. Mikheil Saakashvili is alleged to have choreographed repeated handovers of the channel to an array of loyal businessmen. One of those owners was Khalvashi, until he had a falling out with Saakashvili.

In the later years of Saakashvili’s rule, the three nationwide broadcasters, Rustavi2, Imedi and Public TV would air virtually identical newscasts, all lauding the government’s achievements. The Ivanishvili era brought a new media configuration, with Rustavi2 again becoming a government critic and Imedi chumming up with the new governing force.

“When a television station goes from one political and financial group to another, the public is left between a rock and a hard place,” former speaker of parliament Davit Usupashvili told reporters. “What we need now is the development of truly free television networks.”

A freer media environment was considered one of Ivanishvili’s major accomplishments. That legacy now appears in danger.