The legendary semi-sweet Khvanchkara is an international brand – and used to be an easy target for counterfeiters. Now the police are stepping in. 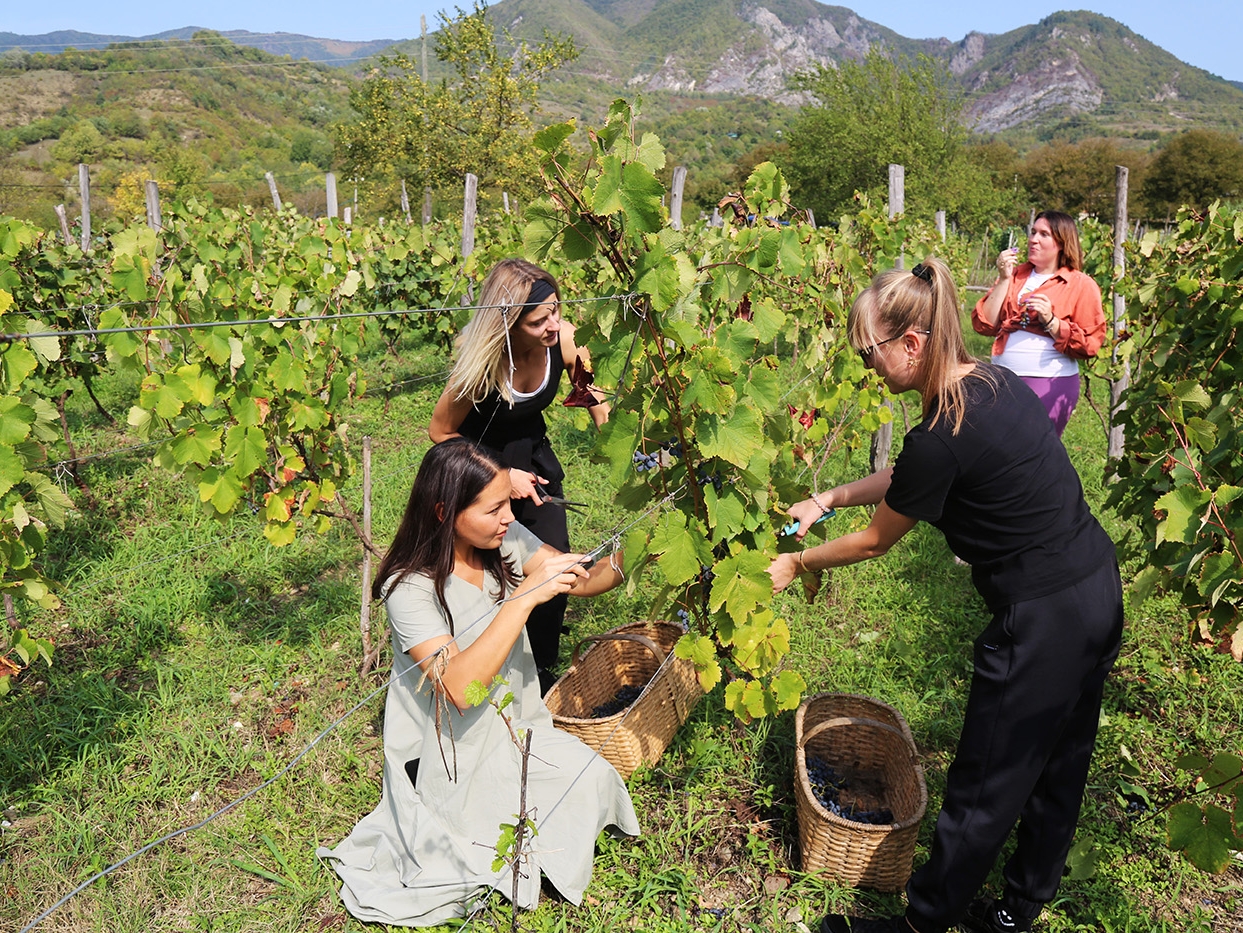 Volunteers from Russia, Belarus and Ukraine participate in the harvest (photos by Giorgi Lomsadze)

“You are not bringing grapes, are you?” a policeman asked a visitor in a small SUV on a recent visit to the town. A few miles further along the vertiginous, winding road, another grape checkpoint appeared.

“You can bring guns, drugs or a dead body here – that’s fine,” quipped Aleko Sardanashvili, a vintner from Khvanchkara. “But god forbid you bring grapes.”

Khvanchkara is home to the eponymous wine that is one of Georgia’s most storied brands. It also, though, had long been home to a smuggling scheme: scofflaws had been sneaking in grapes from the lowlands to sell in Khvanchkara and pass them off as local.

The two laboriously grown varieties that make up Khvanchkara wine – Aleksandrouli and Mujuretuli – sell for seven lari (about $2.50) a kilo. That compares to less than a lari a kilo for the country’s most dominant black grape, Saperavi, down in the main wine region of Kakheti. So during harvest season, grapes are allowed out of, but not in to, Khvanchkara.

During this year’s harvest, the world behind the cordons was abuzz with commotion. Forecasts of rain had sparked fears that the time may be running out to harvest Khvanchkara-grade grapes. Farmers, carrying boxfuls of glittery black bunches, scurried in and out of their vineyards.

“Heavy rainfall could damage the harvest and wash the sugars out of the grapes,” Sardanashvili said. With the eye of a seasoned jeweler, he peeked into a refractometer to inspect the sugar content of his crop. To make true Khvanchkara wine, he says, sugar levels in the grapes should be at least 23 percent.

A semi-sweet red, Khvanchkara stands out by its deeply velvety texture and the rich, berry flavors that stem both from the winemaking style and unique terroir. The Khvanchkara varietals thrive in climates colder than traditional wine country; the town is perched at an elevation of 530 meters and is hemmed to the north by an ascending cascade of Caucasus mountains.

The Georgian state subsidies winemaking – a proud, millennia-old national tradition – by sharing with corporate vintners the cost of purchasing grapes from farmers. Khvanchkara grape growers get the biggest buck for the bang, with the state paying more than half the price that farmers get for Aleksandrouli and Mujuretuli. It also helps local growers protect the purity of their crops. At the collection centers set up by the large winemakers in the region, a task force of ampelographers – experts at identifying grape varieties – form the second line of defense against falsification. They solemnly go through every crate, looking for impostor grapes that they can identify visually and by taste, and test the sugar levels. The farmers, in the meantime, wait in long queues to offload the product of their year’s labor.

Other, boutique winemakers like Sardanashvili make their own Khvanchkara operating outside the farmer-factory-government scheme.

Sardanashvili has two and half acres of vineyards sprawling across the road from his guesthouse – a traditional wooden cottage that he had brought down from the higher reaches of Racha and reassembled in his yard – and a small but professionally fitted-out wine-making facility attached to his house.

Sardanashvili grew up in Khvanchkara but spent many years living abroad and elsewhere in Georgia before returning home in 2013 to set up his wine and hospitality business. “I produced 1,300 bottles of Khvanchkara last year and I can finally say that years of hard work are beginning to pay off,” he said.

During the grape harvest, the national festival known as rteveli, Sardanashvili hires local hands to help pick the grapes. This year, he also had a group of international visitors – a mix of Ukrainians, Belarusians, Russians and an American – who had volunteered to assist with the picking. The volunteers went about the task with varying degrees of commitment, some seeing the vineyards primarily as an Instagram-ready background for their portraits.

At the next stage, the grapes are emptied into a destemming machine, which expels berries from one end and stalks from the other. The berries come out as a mushy pulp, which is then pumped from the buckets into a stainless-steel container. At the end of the process Sardanashvili pours a glass of the purple, intensely sweet juice and toasts his guests, wishing them a return the next year so that they could savor the fruit of their labors.

In other containers white grapes are already fermenting, for dry, light-bodied Tetra and the stronger, amber-tinged Tsolikauri that are more palatable to Western tastes than the town’s famous red. “Khvanchkara is mostly popular among Eastern Europeans, Ukrainians, Russians and other ex-Soviet people,” Sardanashvili explained.

In the premium wine category – a bottle typically goes for around 60 lari ($21), with select vintages costing up to 180 lari – Khvanchkara has been Georgia’s calling card for more than a century. It had its first moment of international fame in 1907, when an experimental wine made by Dimitri Kipiani, a nobleman from Racha regarded as the founding father of the brand, won the grand prize at a wine festival in Belgium.

Following the Bolshevik takeover, the wine – then known as Kipiani – became the favorite of Soviet elites. The name was reportedly a front in the class war against the nobility, and the story goes that Joseph Stalin ordered the prince’s name off what is believed to have been his favorite libation.

The Soviet zeal for quantity over quality created fertile soil for falsification, and farmers and factories began throwing any black grapes into the Khvanchkara mix to produce more than the small area was capable of growing. (This year, an estimated 1,500 tons of Khvanchkara grapes were collected, as compared to 300,000 tons in Kakheti.) Sugar was added to try to match Khvanchkara’s characteristic sweetness.

After the collapse of the Soviet Union the forgeries became still more blatant, with self-proclaimed Khvanchkara popping up everywhere, sometimes even bottled outside Georgia. The only way to guarantee getting the real deal was to have a family member in the region who could set you up with a plastic bottle of the ambrosia.

In an attempt to regain control of the varietal purity of the wine and preserve its value, in 2013 Georgia’s alcoholic beverage authorities turned to the police for help. “The temptation to falsify is strong, since Khvanchkara varieties are two-to-three times more expensive than other grapes,” Levan Davitashvili, then head of the National Wine Agency, said at the time. “But we will make sure that every bottle of Khvanchkara contains real Khvanchkara.”

The town of Khvanchkara has gone into grape lockdown every fall since then. Police checkpoints stand on all three dizzyingly twisted, mountain-hugging roads that lead to the town from west, east and south. One goes through the regional center of Ambrolauri, where a monument to the titular wine – a giant version of a regular Khvanchkara bottle – stands in the middle of a central roundabout. The security and the subsidies, along with broader state and private efforts at rebuilding Georgian wine to an international standard, have resulted in significantly improved quality and an increasingly diverse choice. New roads and improved tourist infrastructure are beginning to attract larger crowds of visitors to the previously largely overlooked Khvanchkara as an alternative to the much more accessible and touristed Kakheti.

But a preoccupation with Khvanchkara the wine turned Khvanchkara the town into a one-trick pony, some worry. “Everyone grows grapes for Khvanchkara here because they get a good price for it, thanks to the government subsidies. In the meantime, other very interesting endemic varieties are not getting the attention they deserve,” Sardanashvili said.

“Nobody does anything else here but grow grapes for Khvanchkara,” he went on. “There is no grocery store or bakery and there are no carpenters or plumbers. During winters, when we get a lot of snow, you really can’t do anything here except to drink yourself senseless.”