Paradoxically, Georgia’s poorest citizens – its elderly – have the easiest access to credit. But there is a catch. 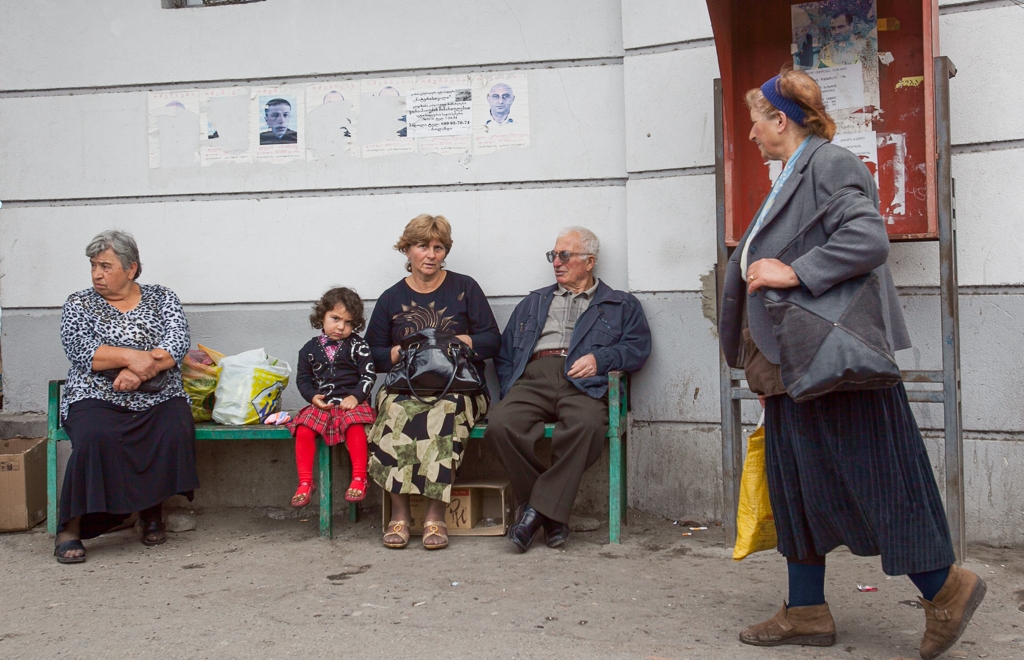 Georgian seniors receive between $70 and $86 per month as a state pension. (Eurasianet archive)

A 75-year-old Georgian woman stood in line outside a Tbilisi branch of Liberty Bank, waiting to get her pension. Her monthly allotment was already a meager $80, but now she gets even less: because of a loan she took out, the bank garnishes about a third of it every month.

“I took a small loan to buy blood pressure medication and my debt is so big that it feels like I’ve been gambling in a casino,” she told Eurasianet, declining to give her name. “Now I have to pray that I stay reasonably healthy and that food prices don’t climb too much until I can pay this off,” she said. Another woman in line chimed in: “We are old and poor, but we pay more than anyone else.”

Elderly Georgians, perhaps the poorest category of people in the country, paradoxically have the easiest access to bank credit: In an unstable economic environment, government retirement benefits are one stable, albeit small, form of income that can serve as security for a loan. Liberty Bank, which holds a monopoly on distributing pensions, also offers advances on those same pensions.

The catch, though, is that this is of the most expensive kinds of bank loan in Georgia, with effective interest rates running a crippling 31 percent or higher. That’s almost double Georgia’s average rate on bank loans, a figure that is already high by international standards. Georgians can take up to nine months’ pension in advance, and the resulting interest can gobble up much of their meager income, leaving many entangled in debt.

Anna Dolidze, the leader of the political group “For the People,” posted a photo on Facebook of a loan agreement with the interest rate highlighted: 35.42 percent. “This means that Liberty Bank is fleecing our grandmothers and grandfathers,” she wrote.

One 65-year-old from Adjara, Guguli Abesadze, told local news site Netgazeti that she took a loan like this to buy firewood and ended up with debt she can’t repay. “I keep paying it off, but it never ends,” said Abesadze, who lives in government housing and lives of meals provided by charities.

Georgian seniors receive between $70 and $86 per month as a state pension, depending on their age and where they live.

Abesadze’s luckier peers have gainfully employed children to support them, but many seniors have no other choice but to take out the costly loans to cover basic living and medication. About a half of Georgia’s 754,000 pensioners had bank loans in 2019, Netgazeti reported.

From the bank’s perspective, being old and poor means a high risk of non-payment. A borrower’s death means no more pensions and the bank being left with no options to collect its dues. High interest rates are the only way the risk can be mitigated, sources at Liberty Bank explained to Eurasianet.

“Nobody is forcing anyone to take that loan, but we need to be mindful of the risk,” one credit officer at told Eurasianet on condition of anonymity. “At the same time, nobody else is giving pensioners loans. You should ask the government why the pensioners have a choice between a miserable pay and an expensive loan.” The bank’s public relations office did not respond to a request for an interview.

Liberty Bank received 90 million lari ($26 million) in returns on pension advances in 2019, but wrote off 27 million ($8 million) in unpaid pension debts, the Georgian service of RFE/RL reported. “This means that this year, seven percent of borrowers passed away before paying off their debt,” RFE/RL wrote.

While critics still argue that the bank is exploiting its exclusive position to overcharge its vulnerable clients, many say that the problem lies with the government for allowing a single company to have a monopoly on pension distribution and, thus, a virtual monopoly on lending to pensioners. The government has deemed it cheaper and more efficient to hire to single bank for the job. Liberty Bank – with the largest network of branches around the country – won a tender in 2009 and has since held the monopoly.

“I can choose a bank to which my salary will be transferred. If I’m not happy with the bank’s services, I can switch to one that gives me better options, including lower rates on salary advances. Pensioners don’t have this option,” Giorgi Papava, an economist at Tbilisi’s Ilia State University, told Eurasianet.

One possible solution would be for the government’s contract with the bank to not only stipulate the cost of the pension distribution service, but also set an interest cap on pension-secured loans, Papava said. But he added: “Quite possibly, the high interest on loans is what primarily makes it worth it for the bank to provide that service.”

There is a growing push to regulate pension loans. A parliamentary committee held a hearing on April 12 to discuss the issue, and Liberty Bank’s executive director Vasil Khodeli told lawmakers that interest rates are competitive and driven by markets. Several economic analysts dismissed the campaign as “populist,” arguing that interest rates in Georgia are appropriate considering the health of its economy.

The National Bank of Georgia did launch a series of regulatory interventions a few years ago to bring down Georgia’s generally exorbitant interest rates. But no regulations have targeted the pension loans specifically.

Meanwhile, many of the nation’s elderly feel forgotten and disrespected. “I spent 50 years of my life teaching, working by the sweat of my brow and this is how I end up, counting pennies, borrowing, portioning food,” the woman in line said. “We are treated like an expensive burden that nobody wants.”