Georgian indebtedness has reached crisis proportions. And lenders take a scant, if any, look at customers’ creditworthiness. 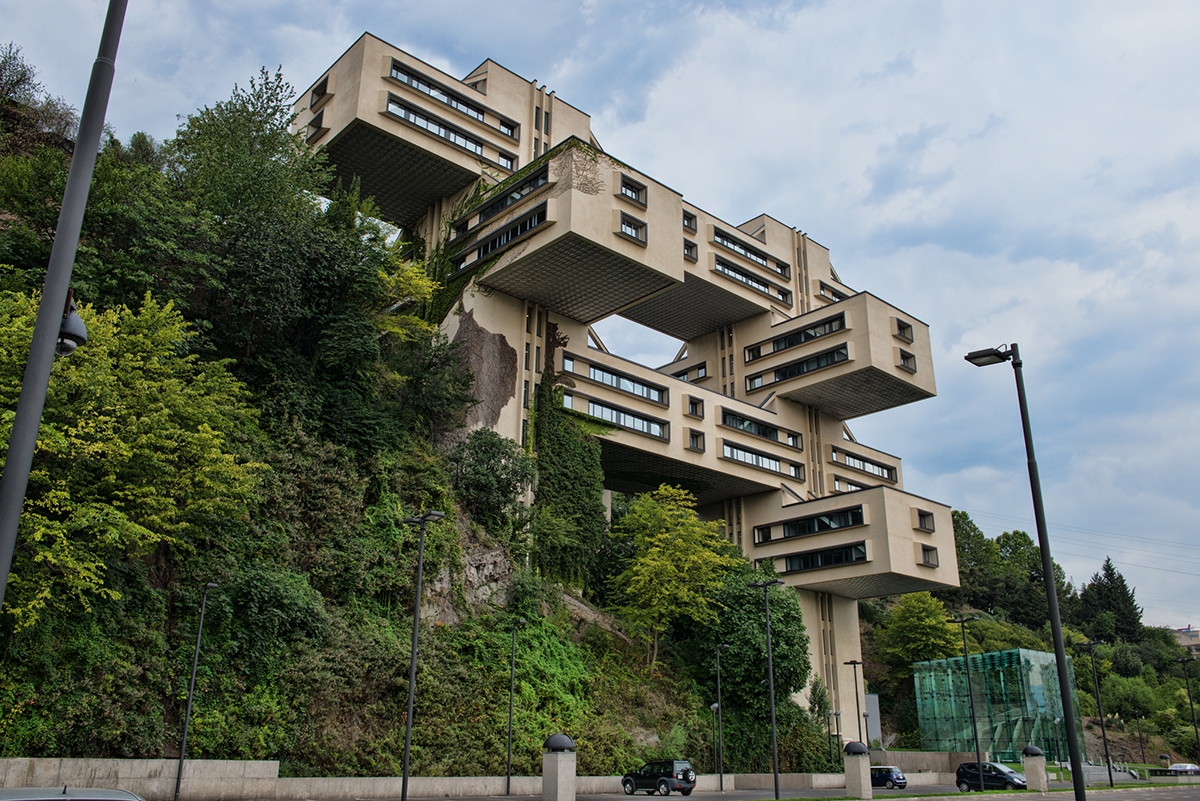 When a friend asked Kato Abramishvili, a 43-year-old single mother in Tbilisi, to take a bank loan on his behalf she thought nothing of it. There were some warning signs – the friend had already exhausted all direct credit options trying to get his little business through straitened times – but friendships come first in Georgia.

“We were friends since we were little kids and I would’ve never thought that he’d get me in trouble,” Abramishvili told Eurasianet. “Also, he had a good car, a fancy phone, his own business and we all thought he was doing really well.”

Abramishvili borrowed 5,000 lari ($2,030) for three months from a large Georgian bank and handed the cash over to her friend. He was supposed to make monthly payments to repay a total of 7,000 ($2,845) in the end, but his business dried up and he escaped his financial liabilities, both formal and informal, to the United States.

This left Abramishvili on the hook for her friend's debt. She was an assistant at an internet cafe making a meagre 150 lari ($61) a month, without her own home, and no means of paying it back.

She thus became one of a vast and growing number of Georgians trapped by debt. Prime Minister Mamuka Bakhtadze said in June that 630,000 Georgians have a debt they are unable to pay off – about 30 percent of what Bakhtadze called the “economically active population.”

“This list includes citizens with interesting business projects, small entrepreneurs who cannot develop their potential, cannot employ other citizens, as an irresponsible crediting system has ejected them from economic life,” Bakhtadze said.

Georgia's poor have become increasingly trapped in debt because of a pernicious triple whammy: easy access to loans, exorbitant interest rates, and an unstable job market. Stories abound of households selling their homes and belongings because of one family member’s ill-advised borrowing.

Abramishvili mainly blames herself for her situation, but proponents of responsible lending would argue that she, being poor and having no property to collateralize, should not have been given a bank loan to begin with. Yet Georgia’s booming consumer loan business has made credit available to just about anyone.

Some of these loans come from banks, but most from so-called “microfinance” companies. These companies have little in common with what is normally thought of as microfinance – low-interest loans to entrepreneurs in poor countries – and more with exploitative payday-loan operators.

Thanks to the microfinance boom in Georgia, borrowing has become literally just a click away.

Lenders take a scant, if any, look at customers’ creditworthiness. To receive a small loan, companies like Vivus.ge tell customers simply to apply online and transfer 1 tetri (less than one cent) from their bank accounts to the company’s account. “The amount approved will be wired to your account in 15 minutes,” Vivus.ge says on its website.

With such easy cash at their fingertips, Georgians have gone on a borrowing spree in recent years. People borrowed to buy home electronics, to cover the costs of weddings or funerals, even to gamble. Many went into a downward spiral of borrowing, piling one loan on top of another, to keep up with repayment plans.

Abramishvili’s loan carried a 300 percent effective interest rate, far above the nominal rates touted by the lenders. As she fell behind on her monthly payments, the late fees went through the roof. Within a year she owed 80,000 lari (upwards of $32,500) on her 5,000-lari loan and was being harassed by debt collectors.

“They were calling me, threatened to have me arrested and evicted,” Abramishvili said. “One day, two big men just barged into my aunt’s place and began taking stock of the property. My aunt eventually pushed them out.”

High interest rates help the lenders turn profits despite high delinquency rate among low-income customers, but critics say that the industry is exploitative.

Household debt now stands at 31.4 percent of Georgia’s gross domestic product, according to provisional International Monetary Fund data shown to Eurasianet. The rate may not look bad compared to rich countries – in the U.S. household debt is about 80 percent of GDP – but is by far the highest among Georgia’s peers economically and regionally (Armenia's figure is 19.8 percent, Kyrgyzstan's 17.7 percent, and Belarus's 7.7 percent).

“It is a shame that Georgian people pay one-third of their income to cover the interest on loans,” said Bidzina Ivanishvili, the billionaire chairman of the governing Georgian Dream Party, in a recent interview. Ivanishvili said that the high household debt is part of the reason his party booted the last prime minister, Giorgi Kvirikashvili, in June and replaced him with Bakhtadze.

Ivanishvili, Georgia’s political CEO, may have exaggerated: According to the IMF, Georgian households, collectively speaking, are paying 13.6 percent of their income to cover debts – both the service fees and principal payments.

“This rate doesn’t look too bad compared to other countries, but it is hard to draw comparisons because countries around the world use different formulas to calculate it,” Giorgi Papava, associate professor of economics at Ilia State University, told Eurasianet. “Some countries include only payments on interest, others include only principal; some include only bank loans and don’t include microfinance.”

The National Bank told Eurasianet that household debt and delinquency rates are not at the mark where the nation’s financial stability is at risk. The bank also argues that access to expensive loans pushes Georgians toward the gray economy, as delinquent customers favor informal employment so that their incomes do not get seized by creditors. And the debt problem is a key factor in a growing sense of economic and social dissatisfaction in Georgia, according to a recent analysis by economic analyst Vladimer Papava.

Cracking down on loan-sharking

Policymakers have begun wrestling with how to stop the predatory lenders.

The first government intervention came last year, when the National Bank brought the previously autonomous “microfinance” industry under its regulatory purview. The bank set a cap for effective interest rates at 100 percent for both banking and non-banking sector loans. Previously, some loan-sharks had been lending at up to a 4,000 percent effective interest rate.

The bank also defined requirements for personal-loan eligibility, tying it to the borrower’s income and the value of secured property. The new regulations go into effect next year. Until then, capital restrictions have been imposed on banks to discourage lending to customers who do not meet the National Bank’s criteria for eligibility. For now, loans in this category cannot exceed 25 percent of a bank’s regulatory capital.

The second round of measures came this year as a part of Bakhtadze’s economic plan. The cap on effective interest rates was lowered again, to 50 percent. Late fees were limited, as well.

Bank representatives told Eurasianet that the restrictions don’t significantly affect them, as short-term, subprime lending is not a significant part of their portfolios. Only the privately held Bank of Georgia, one of the nation’s largest financial institutions, has complained publicly that the new regulations will put a damper on consumer loans.

Microfinance companies, on the other hand, say the regulations are killing their business. “Most companies specializing in consumer loans are going to disappear,” Nikoloz Periashvili, a representative of Okay, a microcredit company, told Rustavi2 television.

Analysts are of two minds about the regulations. “On one hand you want to stop individuals from running into debt. But, on the other, you restrict access to credit for decent payers who can’t otherwise purchase goods and services that make their lives better,” Giorgi Papava said.

Getting in the black

Abramishvili, for one, wishes stricter borrowing rules were in place when she took out her loan, as nobody took into account her income and assets. “When we went to the bank, my friend did all the talking. The loan officer was his friend and we breezed through the whole thing,” she said.

Her account was shuffled between three debt collectors. She faced constant dunning and was paying whatever she could to avoid legal charges. The friend, who did odd jobs in the U.S., occasionally sent small sums to help. “It was $50 here, $100 there and he kept promising that he would pay off the whole thing. We quarreled a lot over Facebook, I was calling his mother, but, finally, I just stopped talking to him.”

Abramishvili eventually reached a settlement with the last handlers of her case. They wrote off most of the late fees and interest accruals, and she paid off close to what she owed originally. Looking back, she says that losing a friend is still her biggest regret: “I’ve never had money, but I had a friend.”

Today, Abramishvili earns 340 lari ($138) a month as an administrative assistant at a school in Tbilisi. As a single mother, she gets a state allowance of 400 lari ($162) a year. Her retired mother, whose pension is 180 lari a month, rents out her apartment to help her family make ends meet. The two women and Abramishvili’s four-year-old son still live in her aunt’s rundown, Soviet-era apartment.

Last year Abramishvili took a consumer loan from a bank to buy a refrigerator. “At first, their eyes popped at the bank when they looked up my credit record,” she said. But she had a more stable income and the fridge served as security, so the bank decided to give her a second chance. She paid it back, her credit score improved and she borrowed again to renovate her mother’s apartment.