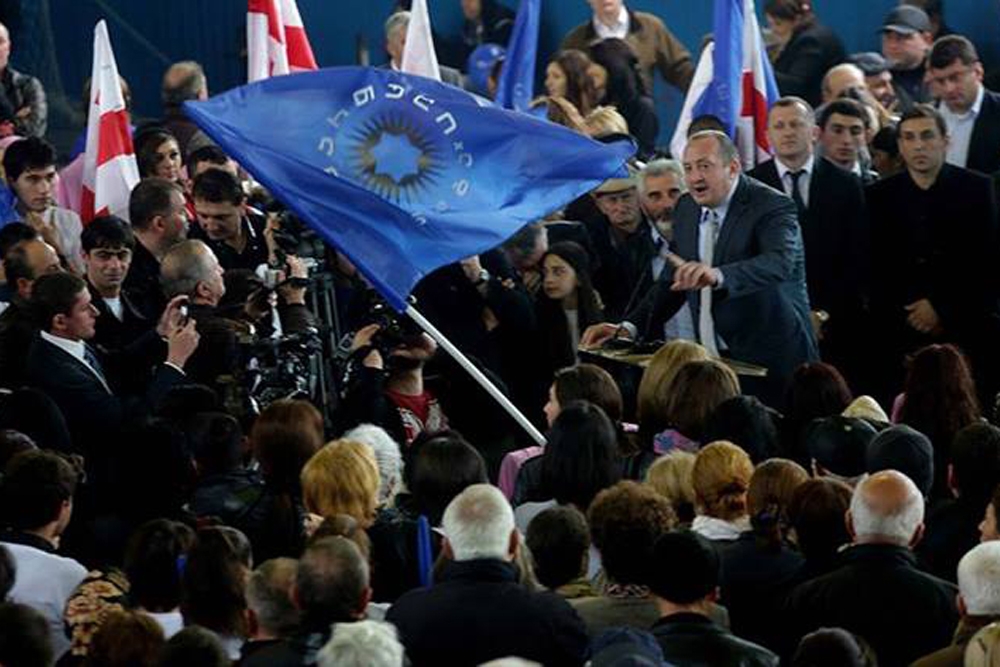 After nearly a decade in office in Georgia, the once-all-powerful President Mikheil Saakashvili is on his way out. His replacement, to be elected on October 27, will enjoy only a fraction of the presidential authority that the incumbent presently wields, thanks to recently adopted constitutional amendments.

In all, 23 candidates are set to appear on ballots when voters head to the polls. The traffic jam of presidential hopefuls (the current total was whittled down from an initial count of 54) has turned an otherwise low-drama campaign into a bit of a talent contest. The real fight, as opinion polls suggest, is expected between the ruling Georgian Dream’s 44-year-old Giorgi Margvelashvili, an ex-education minister, and two ex-parliamentary speakers, 41-year-old Davit Bakradze for Saakashvili’s United National Movement, and 49-year-old Nino Burjanadze, late of the United National Movement, now head of the Democratic Movement-United Georgia.

But it is the lesser-known “contestants” -- as the latest election report from the Organization for Security and Cooperation in Europe’s Office for Democratic Institutions and Human Rights observation mission termed them – who raise greater questions about what motivates Georgians to make election choices.

The contenders include a cryptologist, a few enthusiasts of the late nationalist President Zviad Gamsakhurdia, a few Georgian-Orthodox-Church hardliners, a few Stalin-worshippers, plus some minor opposition party leaders and no-names from the business and civil-society sectors.

It remains a mystery how these contenders, none of them prominent, managed to drum up the required 25,000 signatures among Georgia’s roughly 3.54 million registered voters to register as a presidential candidate.

With a Stalin bust peeking out behind his back, 71-year-old United Communist Party official Nugzar Avaliani, vowed on TV that, if elected, he would revive a command economy and the kolkhoz system of collective farming. During his own TV appearance, Avtandil Margiani, a Shevardnadze-era deputy prime minister, sent heartfelt birthday greetings to Georgia’s public enemy number one, Russian President Vladimir Putin.

Sixty-eight-year-old Tamaz Bibluri, an opposition activist who favors the reinstatement of Georgia’s 1992, Gamsakhurdia-era parliament, decided to run for office, he told an October 11 news conference, because “my friends told me to give it a try.” He complained that media outlets have snubbed his best campaign stunts -- like swimming a one-kilometer, one-man marathon across a water reservoir.

Analysts and others tend to shrug their shoulders when asked how such candidates found 25,000 signatures to support their bid for public office. Small country, big egos, some commentators laughed. “Some of these types are probably very popular with their friends and family, whom they mistake for the entire country,” said Giorgi Tsotskolauri, a psychologist.

From Gamsakhurdia to Saakashvili, Georgians have favored a succession of Messiah-style leaders who gained a mass following virtually overnight, he continued. “It is tempting to be the new messiah, dispensing hope and promises.”

Fifty-five-year-old Mikheil-Gela Saluashvili is among the candidates so tempted. In TV appearances, Saluashvili, gesturing and batting his eyes vigorously, has declared what he takes to be the obvious: Judgment Day is approaching and it has fallen on Georgia to save the world. Saluashvili argues that the Antichrist lives in retirement outside of Tbilisi, in the form of ousted president and former Soviet foreign minister Eduard Shevardnadze. President Mikheil Saakashvili is, of course, the false prophet. It is all in the Bible, Saluashvili claims.

Interest in mysticism and Christianity may be on the rise these days in Georgia, but Saluashvili did not answer a question from EurasiaNet.org about how he found the required 25,000 individuals to validate his candidacy. Instead, he referred this reporter to his campaign website, www.upali.ge (“upali” means “the Lord”).

“I think some of them are just doing this for self-promotion,” development consultant Ekaterine Gamakharia commented dismissively. “Had not they become presidential candidates they would never get two minutes of media attention.”

Koba Turmanidze, country director of the Caucasus Resource Research Centers, believes the nature of Georgia’s political and economic environment can help explain some of the quirks of this campaign season. “Nobody is really backing their promises with concrete plans and political philosophies,” Turmanidze said. “Since voters have no ideological attachment to political forces, many of them go with what sounds as the best offer to them.”

That can include “lavish promises of employment and wealth” -- attractive talk in a poor country, he said, adding that such promises increase the chances that “some [voters] gave their signatures to several candidates.”

The Central Election Commission, which must verify candidates’ signatures within three days of their submission, did not return calls for comment in time for publication.

Election law analyst Gigi Chikhladze, who works for anti-corruption watchdog Transparency International, sees nothing amiss in the fact that so many candidates rounded up 25,000 supporters. The signature requirement to run for president is “moderately high” in Georgia, he said, But at 0.75 percent of the population, the number “is in line with the international standard,” he added.

Neli Sidamonidze, who runs a tiny mom-and-pop shop in downtown Tbilisi, has another explanation. When a prospective presidential candidate, whose name she does not remember, approached her outside of a subway station, she handed over her signature simply because he “seemed like a nice old man.”

She does not plan to vote for him, however. She admitted to having “no idea who he is.”

Giorgi Lomsadze is a freelance journalist living in Georgia. He is a frequent contributor to Eurasianet's Tamada Tales blog.