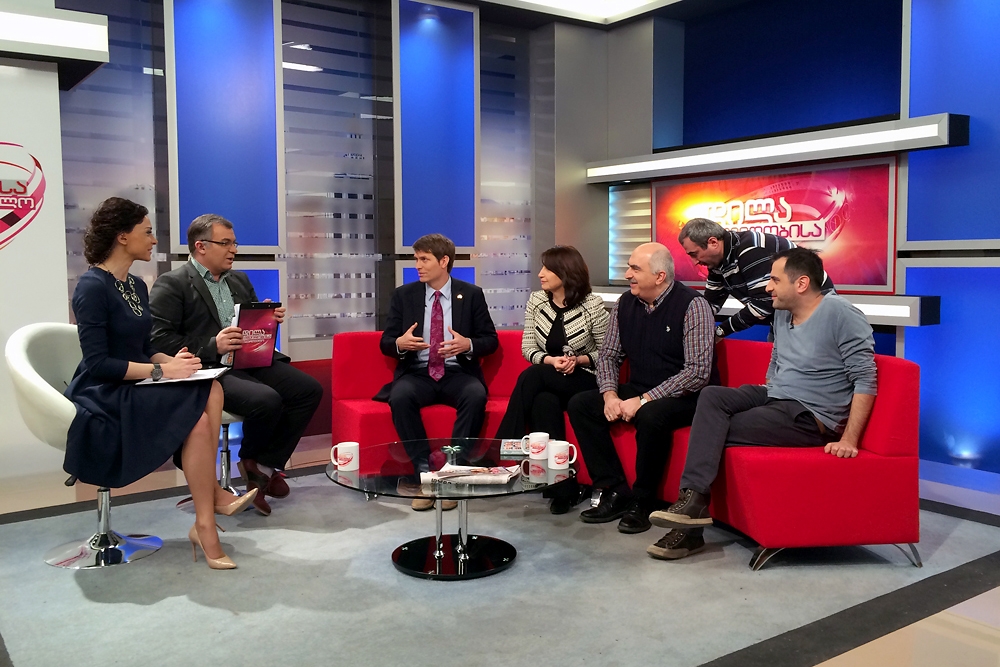 Georgian television broadcaster Rustavi2 started in 1994 and has grown to become the country’s most popular channel. (Photo: US State Department)

A bitter tug-of-war for control of Georgia’s top TV channel, Rustavi2, has impacted not only the country’s media-freedom credentials, but also raised nagging questions about the integrity of its legal system.

Critics have cast the fray as the government’s attempt to take Rustavi2, the country’s most popular TV station, away from the influence of ex-Georgian President Mikheil Saakashvili’s opposition United National Movement. The November 3 verdict found in favor of former owner Kibar Khalvashi, who claims he was forced by Saakashvili to give up the company in 2006.

Early on, international observers had cautioned that the case must meet “the highest standards” of jurisprudence. But did it?

Rights organizations have declined to comment on the original case until the written verdict, due by December 3, is issued.

With no court transcript immediately available, EurasiaNet.org spoke with both sides of the case for details about what transpired in the courtroom.

A Lawsuit Is Born

In 1994, three entrepreneurs — Davit Dvali, Jarji Akimidze and Erosi Kitsmarishvili — set up Rustavi2 in the small town of Rustavi, about half an hour away from the capital, Tbilisi. With its muck-racking reporting, the station, the first to go on satellite, broke the mold for Georgia’s largely Soviet-style television industry.

The channel made history with vigorous coverage of the 2003 Rose Revolution, which led to the collapse of the late President Eduard Shevardnadze’s government. The year after, Dvali and Akimidze claimed that various Saakashvili officials forced them, by threats, psychological and financial pressure, to sell their Rustavi2 shares to a little-known businessman, Paata Karsanidze.

The buyer did not keep the channel even for a day, though. He immediately sold his stake to Khalvashi, who later also acquired the remaining shares through his company, Panorama.

In 2005 and 2006, Panorama and Khalvashi sold these shares to individuals known or alleged to have ties to Saakashvili’s United National Movement — 22 percent to SakTsementi, a company owned by Robert Bezhuashvili, the father of Gela Bezhuashvili, Georgia’s then foreign minister, and UNM member Davit Bezhuashvili, for a $15,000-gain on the purchase price of $65,000; and the remaining 78 percent to a company called Geo-Trans, owned by a certain Bidzina Nizharadze, for just under $200,000, nearly the same amount paid.

In August 2015, Khalvashi demanded that the court annul both of these sales contracts. He also demanded over 18 million laris ($7.5 million) from Rustavi2’s current owners (majority shareholders Levan and Giorgi Karamanishvili and their TV Sakartvelo; minority shareholder Nino Nizharadze) in damages, as well as recognition of claims to copyrights and payment of $500,000 for copyright violations.

Khalvashi’s attorney, Paata Salia, did not show EurasiaNet.org any documentary evidence to justify his client’s claim that former President Saakashvili forced the 2005 and 2006 sales of Khalvashi’s shares.

He cited the difficulty of providing proof of what happened “during a one-on-one talk in the president’s office, when there are threats made in person.”

“For years, we have been looking for ways to go through with this [case],” he said.

In his words, the court only needed “reasonable grounds” to rule in Khalvashi’s favor. Salia alleged that recently published recordings of supposed conversations between Saakashvili and Rustavi2 General Director Nika Gvaramia about organizing resistance to any station takeover provide additional proof that Saakashvili was controlling Rustavi2.

Rustavi2 attorney Zaza Bibilashvili objected that judge Urtmelidze based his ruling essentially on Khalvashi’s oral testimony. He maintains that no documentary proof (“a transcript of a phone call, anything …”) was presented in court.

The fact that Khalvashi, as the majority shareowner, nonetheless appointed Rustavi2’s managers after selling a 22-percent stake in 2005 contradicts claims of a coerced sale, he said.

To support his case that he had received a below-market price for Rustavi2 in 2006 when he sold his final shares, Khalvashi presented financial data on the company for that year. The defense casts doubt on this document’s authenticity as it came without letterhead or a stamped signature. There is no record that the signatory, Rezo Beriashvili, worked as Rustavi2’s financial director then. He was not called as a witness.

The judge accepted the figures as evidence. He appointed a government agency, the National Forensics Bureau, to assess Rustavi2’s commercial value (placed at 7 million laris, or $2.92 million), but did not allow an independent auditor to review the provided financial data.

The plaintiffs cite this audit and the frequent changes of ownership to justify their claim that Rustavi2 was sold in 2005 and 2006 at a below-market price and that the purchasers were not good-faith buyers.

Neither representatives of the companies that bought Khalvashi’s shares in 2005 and 2006, SakTsementi and Geo-Trans, nor other previous owners were summoned to testify about his claim of government-engineered sales.

“Khalvashi was suing the current owners, who did not buy the company from him. Legally speaking, this is utter nonsense,” asserted Bibilashvili.

Salia says that a copy of the lawsuit was sent to the original buyers, but they chose not to dispute it or to appear in court.

A summons was not served.

One key objection rested on criminal charges that had been brought against Urtmelidze’s mother, Mdinara Giorgobiani, as he was hearing the Rustavi2 case. She faces a one to three year prison sentence for allegedly striking her son-in-law with an axe during a quarrel.

In this mother-centric society, with no strong tradition of judicial independence, that potential sentence meant to many that the government could pressure Urtmelidze to change the station’s ownership.

“The prosecutors were practically holding Urtmelidze’s mother as a hostage,” alleged Rustavi2 attorney Zaza Bibilashvili, who serves on the political council of the opposition UNM.

Without elaboration, Urtmelidze, however, told media that his mother is not his family member and that he has no interest in this “private complaint.”

The axe case is based on an incident that allegedly occurred nearly two years ago. Claiming ill health, Giorgobiani, reportedly in her 70s, did not appear at a preliminary court hearing. Her trial is scheduled to begin on December 11.

Khalvashi’s lawyers counter that the defense focused on this matter only to smear the judge, who was appointed to the bench in 2010 under President Saakashvili.

“They tried to outshout the obvious facts in the case with these claims about the judge,” said Khalvashi’s lawyer, Paata Salia.

But the questions for Urtmelidze did not end there. On November 5, he authorized Khalvashi to appoint temporary managers to oversee Rustavi2’s ownership handover — in apparent defiance of the Constitutional Court, which had ordered no change pending appeal.

Nino Gvenetadze, chairperson of the High Council of Justice, the body governing Georgia’s judiciary system, requested a meeting with Urtmelidze. He snubbed the call, saying it would be publicly construed as a demand for explanations from a judge.

Mistrust also has dogged the Constitutional Court, Georgia’s highest judicial organ. All of its nine justices except one (Merab Turava) were appointed under Saakashvili’s administration.

It received praise from Rustavi2 for ruling before the lawsuit verdict that a change in ownership could not occur until the case had been appealed. Urtmelidze appeared to counter by allowing “temporary managers” to run the company nonetheless. Though that ruling was overturned, the Constitutional Court added an extra defense by suspending the clause of law on which it had been based.

Parliament, controlled by the ruling Georgian Dream coalition, has demanded that two Constitutional Court justices be removed from hearing any Rustavi2 cases. Judge Maia Kopaleishvili served as a deputy under Rustavi2 General Director Nika Gvaramia while he was an education and justice minister; judge Konstantine Vardzelashvili’s wife, Ania Zhvania, was a deputy education minister under Gvaramia.

On November 13, the Court rejected the request. In earlier remarks to reporters, Constitutional Court Chairperson Giorgi Papuashvili expressed confidence that “none of the judges are influenced by a personal relationship …”