The country is second in the world in bitcoin production. Alongside major manufacturers a cottage industry of small operators is flourishing. 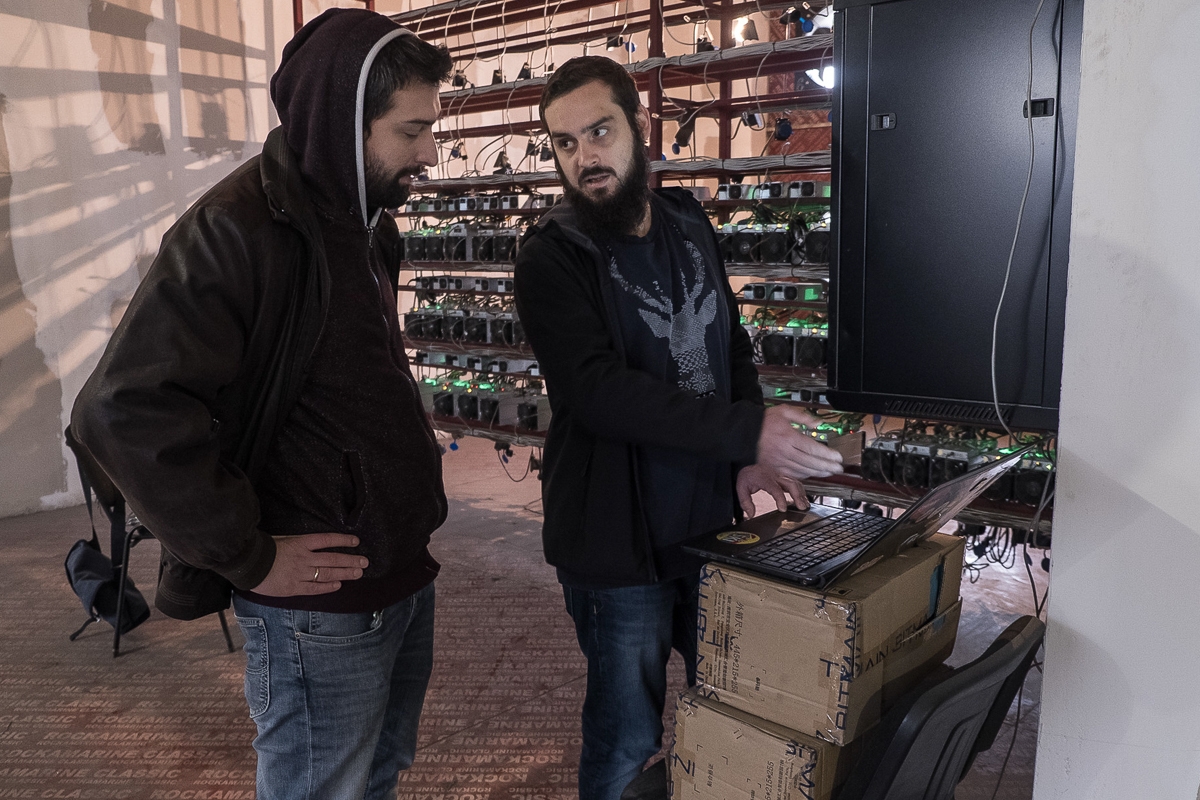 Bitcoin miner Shota Siradze and his business partner Irakli Pruidze use a laptop to monitor their mining operation. (All photos Joe Harrison)

In the basement of a Khrushchev-era apartment building in Tbilisi, a bunch of tomato plants glow under purple lights. Nurtured from seed since November, these fledgling beauties aren’t the subject of just any hydroponic experiment. The source of the warmth nurturing them, and Shota Siradze’s only income, is a home-grown bitcoin mining operation.

In recent years Georgia has gained renown as an unlikely world capital of cryptocurrency mining. It’s the second most popular country for bitcoin mining in the world – behind only China – capturing 15 percent of the global market, according to the Tbilisi-based cryptocurrency company Spotcoin.

Major players like BitFury and Birtvi are operating here, and one can find cryptocurrency ATMs in malls, vape shops and casinos. But alongside the big cryptocurrency companies, a smaller cottage industry of backyard mining operators has taken hold, keen to grab a slice of the bitcoin pie.

Siradze, 29, a former IT professional, first started dabbling in bitcoin while working for a Georgian internet service provider several years ago, buying mining components from China and setting them up in the apartment he shared with his mother.

He even made some money from his hobby at one stage, he tells Eurasianet, but only because he wasn’t paying for electricity at the time – he was siphoning it off the family grocery store.

It was only after Siradze quit his job and started working freelance IT gigs that he turned to the unpredictable cryptocurrency world for his sole source of income. It was the summer of 2016, bitcoin was worth around $600 and his first client was a friend who asked him to set up a mining operation on his behalf.

For his efforts, Siradze got a share of the earnings. That’s how he continues to run his business today.

Spotcoin, which organized Georgia’s inaugural blockchain conference in Tbilisi in May (the city also hosted a world digital mining summit in September), cites low-cost electricity from hydropower and “positive” – that is, minimal – regulation as reasons for the country’s suitability for mining. (Blockchain is the technology behind cryptocurrency mining. Bitcoin is one of many cryptocurrencies.)

That’s true as well for backyard operations like Siradze’s, where cooling fans hum away day and night in his basement and three other mining "farms" in town – to keep the mining machines from overheating.

A typical workday for Siradze and his business partner, Irakli Pruidze, starts at their company “HQ” – in the purple-lit basement. Siradze built the hydroponic system to harness some of the heat from his mining units since tomato plants thrive in warmth.

The fluorescent lights and hydroponic setup give the basement a bit of a subversive feel, but Siradze laughed at this suggestion and insisted that everything they do is above board. “If it’s not forbidden, it’s legal,” he said of Georgia’s laissez-faire regulatory environment.

After checking in at HQ, Siradze and Pruidze usually visit one or more of their other sites. Two are kitted out with clients’ mining computers and the other, tucked away in an unused corner of a cognac factory, is home to 30 units that Siradze bought himself.

Not far from a dusty Stalin painting and bust on the floor sits the farm’s water-fed cooling system, crucial for dealing with the heat generated by the mining equipment. Even on a cool winter’s day, it feels like there’s a massive hairdryer in action.

Siradze said he has three groups of clients, all who came to him through word of mouth. He describes them as having little understanding or interest in how the process works. “It’s just another source of income for them,” he said.

But it’s an unpredictable one.

He claims to have gained a “tolerance against worry” from working in what is a notoriously volatile industry. Ever-changing influences include the fluctuating global value of bitcoin and his government’s “confusing” stance on cryptocurrency.

Siradze said he’d welcome a more official stance from his government, like a clear statement on “what you can do and what you can’t. It would be a good thing because it would attract more investors.” The “if it’s not forbidden, it’s allowed” principle works for him, he said, “but in the case of investors […] you can’t convince [them] with that.”

While he said he tries to warn clients off investing – even going so far as telling them to open a shawarma place or a grocery shop instead – some still want to go ahead.

Siradze said his clients take full responsibility for their choices, but he feels for “regular people” in Tbilisi who thought they could get rich by selling their cars – and even homes – to buy mining equipment, only to lose everything.

“It’s really, really hard to gain money from mining operations. Changes [in bitcoin’s value occur] not in a month or a year, but in hours or days,” he said. Despite this, Siradze said he has no regrets about leaving his day job: “I like what I’m doing. It’s full of surprises.”

And if it all goes under, he said, at least they’ll have tomatoes.

Anna Pearson is a writer in Tbilisi.