Georgia’s Tbilisi Dinamo: Under Stalin, a Soccer Team for the Secret Police

For Soviet Georgia, Tbilisi Dinamo was not just a soccer club. It was a display of national pride and identity. 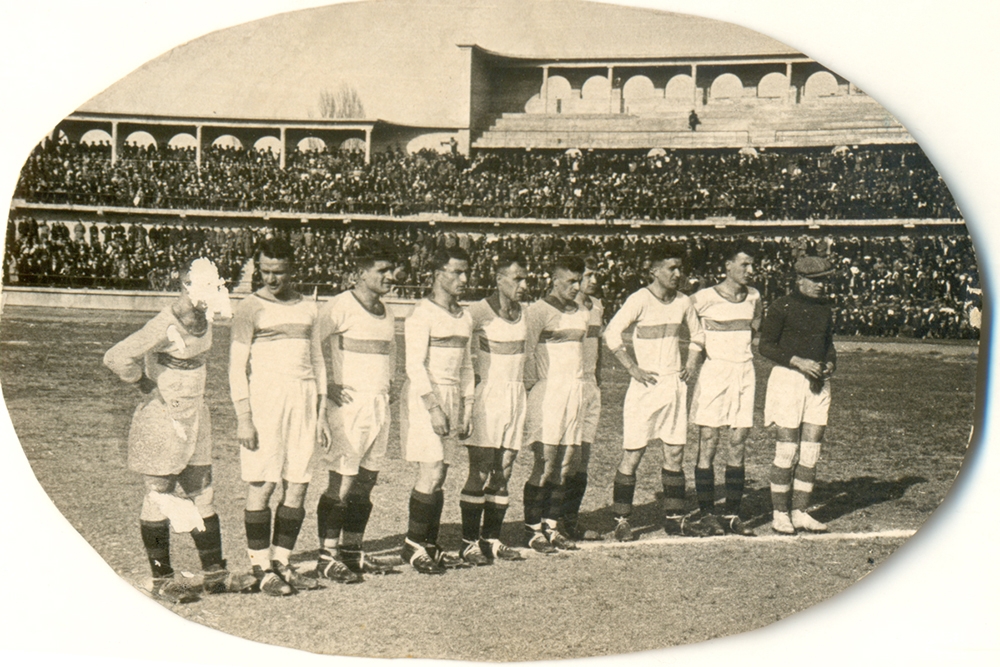 A photo of the 1937 Tbilisi Dinamo team shows 10 players lining up at the beginning of a match, but only nine player names are hand-written on the back of the photo. It has been claimed that Mikhail Aslamazov, the team captain and an NKVD officer, had his face scratched out from the photo. Aslamazov was arrested on Dec. 1, 1937, and, reportedly, two weeks later jumped to his death out of a window in the Tbilisi NKVD building. (Photo: National Library of the Georgian Parliament)

For Soviet Georgia, Tbilisi Dinamo was not just a soccer club. It was much more – a display of national pride and identity. From ordinary people to high-ranking politicians, the whole country was in love with soccer. Including Lavrenti Beria, the sadistic secret police boss who, as the feared head of the People's Commissariat for Internal Affairs, oversaw the arrests and executions of tens of thousands of Soviet citizens.

But Beria, 26 years old when Tbilisi Dinamo was founded in 1925, also loved soccer. He played himself and knew the Dinamo players personally. By roughly 1928, two years after he became the feared head of Georgia’s security services, state archival documents show he had made the team part of the secret police, known as the NKVD.

Appointed NKVD officers held all managerial positions at Dinamo and were involved in discussions of technical and financial problems. Some took it on themselves to act as executive coaches.

Such a role was not unusual. In the Soviet Union, sports were seen as a tool in the Communist Party’s drive to build a socialist society. No sports teams were independent from party or government control. Soccer players, who received no salary for playing, happily received the free apartments and other perks that went along with this association.

But in 1937 in Georgia, that link turned some of Tbilisi Dinamo’s players into perpetrators of dictator Joseph Stalin’s Great Terror.

Under Beria’s aegis as first secretary of Georgia’s Communist Party, between 1937-1938 alone, 25,430 people were arrested, 14,500 sent to labor camps and 10,930 executed, according to KGB data cited by German historians Marc Junge and Bern Bonvich in their 2015 book (“Bolschewistische Ordnung in Georgien”) on this period in Georgian history.

At the Terror’s height, all important Dinamo business was discussed in the NKVD building itself, in the office of secret police boss Sergo Goglidze. Players who doubled as NKVD agents could find themselves training for matches by day, and purging the population by night.

Or, if retired players, being purged themselves.

In 1937, Mikhail Aslamazov, an ethnic Armenian and one-time captain of Dinamo who had become an NKVD officer, was arrested and interrogated. According to the official story, after his arrest, he jumped out of a window from the Tbilisi NKVD building and died. But an NKVD employee of that time, Konstantin Savitsky, later an aide in the Soviet interior ministry, testified in the 1950s that Aslamazov had been tortured brutally until he committed suicide.

Another former player, Levan Abashidze, headed the Georgian NKVD department in charge of investigations of alleged criminal cases. When the Terror hit the NKVD, he, too, was arrested and, at the age of 30, executed.

Reasons for these arrests are not clear. Both Aslamazov and Abashidze were retired players, though; no longer useful to Dinamo.

At the same time, Beria’s desire to win matches could triumph over his desire for “mercilessly” destroying perceived enemies of the Party.

In 1936, Boris Paichadze, today the namesake of Tbilisi’s largest soccer stadium, was a 21-year-old prospective player from the small seaside town of Poti. Though his father, a former Menshevik Party member with a prison record, had been sentenced to five years for anti-socialist agitation, Beria nonetheless brought Paichadze to Dinamo.

He went on to become a famed center, hailed locally as Georgian soccer’s “Caruso,” and the team’s coach. Yet, according to the Party’s Central Committee documents, after World War II he also worked for the short-lived NKGB (People's Commissariat for State Security), the NKVD’s coequal.

A talent for soccer apparently in no way limited a talent for torture, according to Georgia’s former KGB archives.

In 1937, Beria named 33-year-old Dinamo coach Grigol Pachulia, a popular former left fullback with a talent for goals, head of the NKVD in the Black Sea region of Abkhazia. There, he devised new methods of torture and interrogation to meet with the approval of Beria, a beloved confidante.

According to the KGB archive, NKVD workers regularly flooded with water a basement cell in the NKVD prison in Abkhazia’s central town, Sokhumi. Prisoners kept there had no access to toilets or fresh water, and were constrained to drink this water as well as use it for a toilet.

After Beria’s arrest in 1953, Pachulia was accused of inhumane treatment of prisoners and sent to the labor camps for 25 years. Upon his release, he insisted on his innocence. But, according to his daughter, who requested anonymity, he commented that “probably” there was cause for his imprisonment.

Crimes, though, were not limited to prisoners. In its desire to bring the best players to Dinamo, the NKVD in the early 1950s allegedly kidnapped Misha Jojua, then playing for Moscow’s Krilia Sovetov, and, Jojua claims, flew him to Dinamo from a match in Tashkent.

Georgians generally knew that the NKVD and, later, the Ministry of Internal Affairs, controlled Dinamo, even after Georgia gained independence in 1991. But they celebrated the team's famous victories, capped by its European Cup triumph in 1981, and forgave the players who worked for the NKVD because the club boosted national pride.

The late historian Gogi Demetradze, a Tbilisi State University professor who instructed this writer, had a fervent hatred for Beria and the secret police, yet could identify with the henchman’s love for Dinamo. “He was not a good man,” once said Demetradze, whose grandfather was arrested under Beria, “but still, he built Dinamo Stadium … and supported Dinamo Tbilisi.”

Even after Beria’s fall from power in 1953, officials’ obsession with Dinamo did not wane. At a meeting that year among the Georgian Communist Party’s Central Committee, First Secretary Akaki Mgeladze warned the team that "If you don't win [the Soviet championship], we'll shoot all of you."

The team did not win an all-Soviet championship until 1964, but it did survive.

It later became part of the Georgian interior ministry, a relationship that continued until the late 1990s.

Today, Dinamo acknowledges its NKVD past, but without nostalgia. “We had no benefits from the NKVD...” emailed a team media representative, Giorgi Pirtskhelani. “Dinamo never got anything except oppression and injustice.”

David Jishkariani is an historian and co-founder of the Soviet Past Research Laboratory (SovLab) in Tbilisi.