Georgia’s Thieves-in-Law Reinvent Themselves to Survive 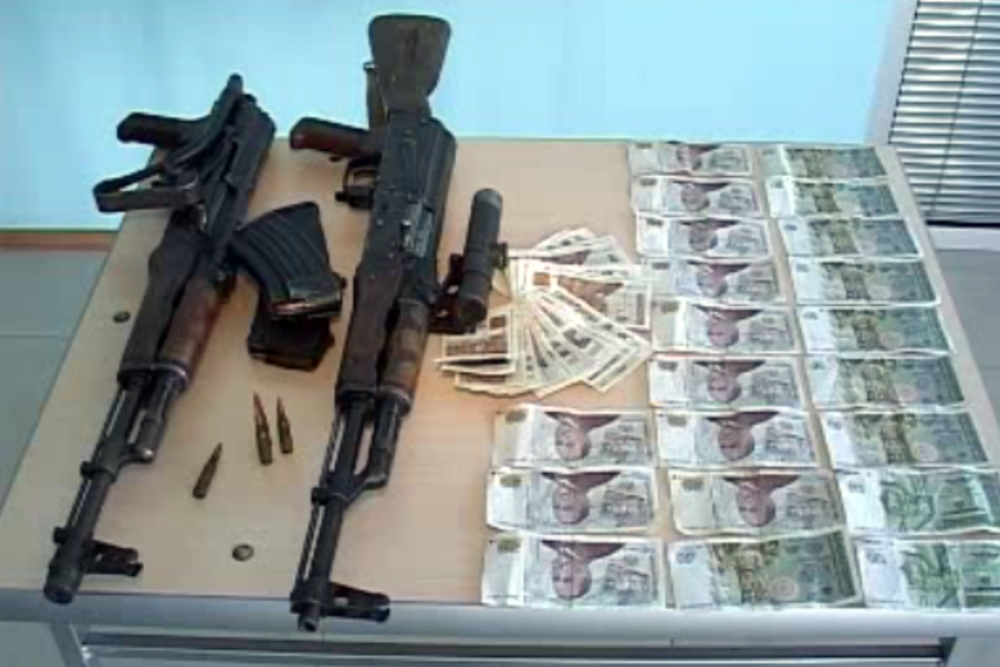 Automatic weapons and money are displayed by Georgian police in the region of Imereti following the arrest of two organized criminals in September 2010. (Video screen shot)

With a Georgian church as a demure backdrop, a few unremarkable, tubby middle-aged men stare grimly into the camera. At first glance, this might seem a photo of devout pilgrims. But it is not. The beer-bellied men pictured are alleged Georgian crime-bosses, and they are busy doing what Georgian crime-bosses have learned to do since the collapse of the Soviet era -- adapt to change, and survive.

It used to be all much simpler. Originally products of the Soviet prison-system, Georgia’s kanonieri kurdebi (thieves-in-law), groups of criminals who live by a strict code of conduct, once ranked as a “criminal nobility” worthy, in one instance, of a government-supplied VIP escort from the Tbilisi airport

In a new study from Oxford University Press, “Reorganizing Crime: Mafia and Anti-Mafia in Post-Soviet Georgia,” British criminologist Gavin Slade, however, strips away these images to look at the Georgian thieves-in-law with a social scientist’s clinical detachment -- as products of their ever-changing environment, and not as the stuff of legend.

In this lies the book’s greatest value.

Arguably the foremost non-Georgian expert on the kurdebi, Slade names the country’s robust Soviet-era shadow economy and the lack of any effective law-enforcement or judicial system as the real reasons behind the thieves’ rise to power in the 1980s and 1990s.

Quite simply, whether for Italian chocolate-spread or to find a stolen car when the police could not, Georgians had mundane demands, and the thieves met them.

“The inter-connectedness of Georgian social life” essentially “facilitated” the thieves’ connections with the state, he notes.

That prompts reader interest in elaboration from both parties to this prior relationship.  Unfortunately, it doesn’t come.

Granted, the thieves and their friends, past or present, are not known for chattiness with outsiders. And this is a reference book, rather than The Godfather.

Yet, out of 53 interviews cited in the book, only three are with individuals who once had ties with so-called “criminal authorities” or had been convicted in a thief-in-law case.

The work’s most compelling moments for readers come in those chapters that try to explore the dynamics of how the thieves actually managed to integrate into broader Georgian society -- by being seen as “good arbitrators without recourse to violence,” effective security guards or, more crudely, as one ex-Kutaisi police chief observed, just by showing they had “big cars” and “money.”

Those perceived advantages, of course, came to a screeching halt once Georgia’s ex-President Mikheil Saakashvili began a brutal crackdown on the kurdebi in 2004.

But the changes, notes Slade, already had begun. Money ($300,000 in one case) or family-ties came to take the place of the former sine qua non of prison-experience for gaining the title of a thief-in-law.

As one respondent drily commented, the process was like British soccer team “Manchester United signing some awful player . . . and then you see he can’t play . . .”

Public attitudes toward the thieves sagged in response. Restoring their reputation became key, and with that, such tactics as currying favor with society by identifying with the powerful Georgian Orthodox Church.

Others, faced by Saakashvili’s zero-tolerance campaign for thieves-in-law, disappeared abroad -- a trend that, in one 2012 case, led to the initiation of a new thief via Skype.

To his credit, in covering this era, Slade, who has served as a source for EurasiaNet.org stories, does not revisit the worn-out tale of Saakashvili’s makeover of the traffic-police; a topic which can cause jaw-splitting yawns among long-term Georgia-watchers.

He terms the police reforms “a success story,” but cautions that “continuing police abuses, lack of civilian oversight, and politicization,” as well as “wide-scale human rights abuses and torture in the prison system” mean that Georgia is no “model for others” in fighting organized crime.

Justified criticism. Yet, nonetheless, he sometimes paints in broad strokes the Saakashvili policies toward thieves-in-law.

While the thieves were a fixation in Saakashvili’s early years in power, by the end of his 2004-2012 tenure, they were not the government’s explanation for “every crisis or challenge to its power.” Rather, that was a role primarily given to Russia to play solo.

How those policies have changed since 2012 under the current ruling Georgian Dream is not addressed. It is a topic that already has emerged as a political football in Georgia.

That lack of information leaves questions open about the police and prison reforms’ long-term impact on Georgia’s thieves.

Slade cautions, though, that the country’s large number of ex-convicts and relatively high unemployment (officially, 14.6 percent) could provide opportunities for a kurdebi-comeback.

Whether or not it will ever materialize remains to be seen. After all, as Slade argues, Georgia’s thieves-in-law, ultimately, are creatures of change.