An embattled banker and promoter of a major East-West transit project is calling on supporters to challenge Georgia’s billionaire leader in next year’s election. 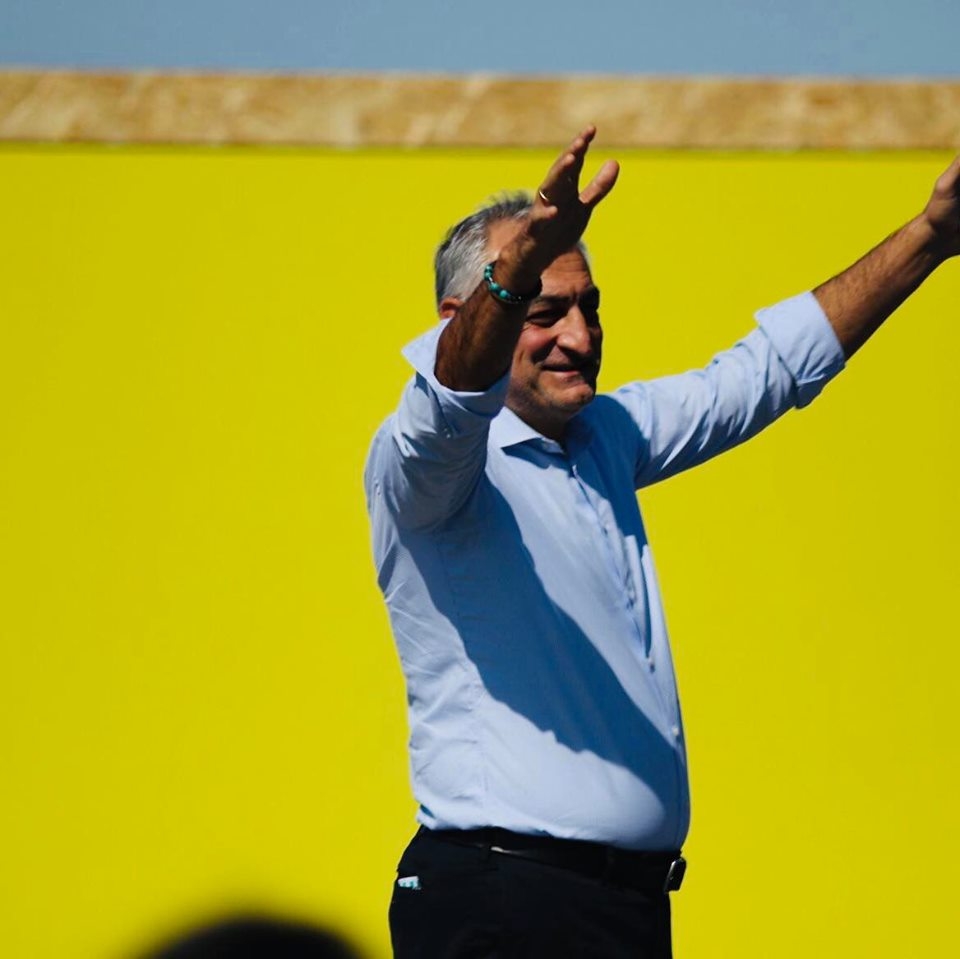 With beach pebbles crunching under his feet, Georgia’s banking executive-turned-political-debutante Mamuka Khazaradze approached a massive yellow board, set up just steps away from the lapping waves of the Black Sea. In broad letters he wrote the name of his new movement, “Lelo.” It’s Georgian for the rugby equivalent of a touchdown, and with the gesture Khazaradze entered Georgia’s political scrum.

The unveiling of this new, potentially game-changing movement had an air of a corporate retreat, as the multi-millionaire held forth with a microphone in hand, bullet-pointing his political plans. “We are holding out for leaders, successful individuals,” Khazaradze told his audience of supporters and journalists gathered on the beach of Anaklia. “This movement, soon to be a political party, is going to be a party of leaders, not a party of Mamuka Khazaradze … or some other name’s party.”

He said he was holding out for 12 followers to join him to form a shadow cabinet, adding a messianic air to the seaside gathering.

The setting, while surreal, was also symbolic: Anaklia is the site of the prospective pièce de résistance of Khazaradze’s business career – Georgia’s first ever deep-sea port. It is planned as a hub for China’s Belt and Road Initiative, which Khazaradze and other backers tout as a golden goose for Georgia.

The Anaklia project hit the skids as Khazaradze’s ties with the governing Georgian Dream party soured. Becoming a political leader affords Khazaradze another potential means of getting the project implemented as it faces headwinds from the authorities. His new movement aims to compete in next year’s parliamentary elections, using the port project as one of his main sells to voters. The port will bring jobs, national revenue and economic integration with Europe, he argued at the September 12 launch.

But the foray into politics also means walking into a Mexican standoff with the current Georgian leader, billionaire Bidzina Ivanishvili, and the would-be leader, exiled ex-president Mikhail Saakashvili. Khazaradze’s formal entrance into politics was met with mocking attacks from both fronts.

“He thinks that the 12 leaders that he seeks are the disciples, but, given his past, he is more of character from ‘Alibaba and the 40 Thieves,’” sneered David Chichinadze of Georgian Dream, Ivanishvili’s party. The presentation of Lelo was a “biblical, lyrical and comical affair,” Gia Volsky, the vice speaker of parliament chimed in.

From the opposite political corner, Saakashvili also railed against Khazaradze, essentially describing him as a mini-Ivanishvili and oligarch wannabe. “As if one loan shark was not enough, now smaller loan sharks are coming along,” Saakashvili said in a Facebook video.

At loggerheads with Georgian Dream, Khazaradze also has ruled out any alliance with Saakashvili’s United National Movement (UNM).

“It is a welcome development as this defective bipolar system has to end and alternative political centers need to emerge,” political commentator Gia Khukhashvili told the IPN news service. Khukhashvili argues that Ivanishvili’s strategy is to make sure that Georgia only has a choice between Georgian Dream and the UNM and to nip in the bud any other alternative.

While not in the same financial league as Ivanishvili, Khazaradze has significant resources of his own and is not as burdened with political sins as UNM, which ruled Georgia until its defeat to Georgian Dream in 2012.

But Ivanishvili remains capable of unleashing the full the rage of the state apparatus against his rivals. Khazaradze and his business partner Badri Japaridze, co-founders of one of Georgia’s largest banks, TBC, have been charged with money-laundering and their bank accounts have been frozen. The two men, and many other Georgians, dismiss the charges as Ivanishvili’s attempt to take down a potential threat to his rule.

The authorities also have accused Khazaradze of failing to raise planned investments for the Anaklia port, while he claims that the government wants to sabotage the project or at least squeeze him out of it.

It is unclear when Ivanishvili soured on Khazaradze, who was previously known as an apolitical conformist, managing to maintain a safe remove from all the political leaders who came to rule over Georgia in past three decades.

Khazaradze’s move into politics faces a dose of public skepticism, coming as it has only after his personal business interests in TBC Bank and Anaklia Port came under attack. Still, to voters weary of the eternal Ivanishvili-Saakashvili battle that has dominated Georgian politics for the last several years, Khazaradze could offer a third viable option to tick on the ballot box in 2020.