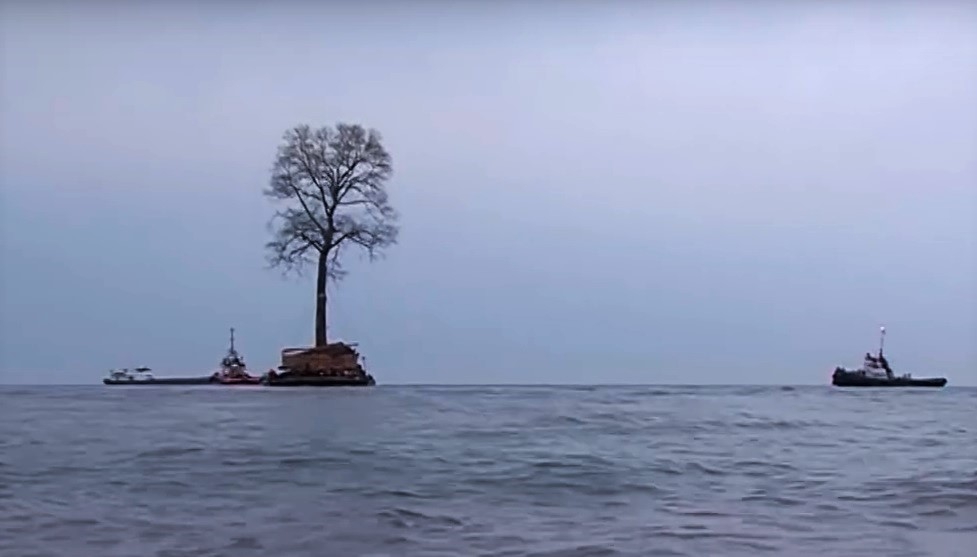 Screenshot of a video, from Georgian broadcaster GDS, of a tree being transported along the Black Sea to ex-PM Bidzina Ivanishvili's under-construction large tree park.

It was a surreal tableau – an enormous tree floating across the sea, its immense trunk and boughs silhouetted against the overcast sky. The stately tree, towering upright on massive barge pulled by a tugboat, was perhaps the strangest thing Georgians had seen sail the Black Sea.

A century ago, whoever planted that tulip tree – liriodendron tulipfera to use the botanical nomenclature – in the small seaside town of Tsikhisdziri could not have imagined that, midlife, it would travel 14 miles north to Shekvetili, the site of an upcoming private arboretum owned by Georgia's richest man and political puppetmaster, Bidzina Ivanishvili.

Ivanishvili’s corporation, Cartu Group, at the time – this was 2016 – boasted of pulling off a globally unprecedented feat of tree transportation. (Cinematically inclined observers compared it to the iconic scene in the 1995 film “Ulysses' Gaze,” only with a tree instead of the statue of Vladimir Lenin.)

But it turned out that this was only the beginning. Soon an entire forest of gigantic trees, all uprooted from the coast, would set sail toward the Georgian billionaire ex-prime minister’s new seaside park a few miles away.

For the past two years, dozens of veteran trees – more tulip trees, magnolias, lime trees, cypresses, eucalyptuses – have been harvested from across Georgia’s western, subtropical climes to provide landscaping for the billionaire’s garden. “Gigantic trees are my diversion,” Ivanishvili once confessed, and of late he has been giving free rein to his dendrological urges.

Scores of men and heavy machinery have been deployed in the western regions of Achara and Guria to dig out trees from private properties, roadside shelterbelts and hilltop groves. An entire infrastructure is being built, with roads carved through the woods and new piers protruding into the sea, to facilitate the multimodal shipping process. On occasions, overhead power lines for trains have had to be removed and traffic stopped to let the trees, their massive soil balls potted in girdles of picketed wood and mounted on heavy haulers, pass though to reach the sea.

The march of trees, drawn to one place as if by some sorcerer king’s order, has been a phantasmagorical sight to watch, a spectacle suitable for scoring by Sergei Prokofiev’s Dances of the Knights. It also has inspired much dark humor. Online memes show trees running for their lives with Ivanishvili chasing them with a spade. “Don’t let Ivanishvili see that,” Georgians are wont to say these days when they see a large tree.

But the billionaire’s fad is not a laughing matter for many. It is leaving a trace of muddy blight and destruction in its wake, disfiguring Georgia’s favorite summer escape area.

“The damage is immense,” Nata Peradze, a member of Guerrilla Gardening, green activism group, told Eurasianet. “It's not just about the trees that are transplanted. Others are knocked down to make way to transport them.”

Last summer, holidaymakers could not recognize some of the spots they had driven past every year on their way to the beach. One quaint grove, just shy of popular resort of Kobuleti, was reduced to a soggy mess cratered with giant holes, “a tree graveyard,” as one local called it.

Similar sights, minefield-like fields of ruin, can now be found on either side of the main highway that snakes along Georgia’s Black Sea shore down to the Turkish border.

This month the mass transplantation has moved further south, approaching Batumi, Georgia's seaside capital. Recently released drone footage showed an entire hill ravished of its once lush vegetation. Rising above the shore near the village of Buknari, the hill is being dug out and bulldozed through. Concrete slabs are being laid to create a makeshift road for the haulers to go in and out.

“They did all that to take away two liriodendron trees, two magnolias and an eucalyptus, and all other trees have been chopped down to clear the way,” said Rezo Kharazi, the local representative of the opposition National Movement Party, who published the footage.

Fighting a one-man crusade against the transplantation frenzy, Kharazi has been documenting and estimating its toll, going to every location, filming and making before-and-after satellite map comparisons. “By our estimates about 3,800 trees have been cut down because they stood in the way, and about 150 have been transplanted,” he said.

Generous compensation, dispensed through Ivanishvili’s Cartu Group, have secured cooperation from local, mostly poverty-stricken communities for some time. But public anger has been growing. “Everything that took so much time to plant and grow is being sacrificed to one man’s obsession. I don’t understand why are we letting him do that,” one woman in Batumi told TV network Rustavi 2.

Peradze says that Ivanishvili is too rich to be stopped. “Environmentalists and geologists on the government’s payroll, and also the useless Green Party, have all been suborned and they all carry water for Ivanishvili,” Peradze said.

Georgia's richest man, Ivanishili emerged from his longtime reclusion in 2012, installed his loyalists in power and went back to the shadows. He is seen as the puppet master of Georgian politics, with his estimated $4.6-billion fortune – about a third of Georgia’s economy – and his sprawling influence leaving little hope for his shadow rule to be challenged through fair elections. His clout is overriding public resistance to his controversial pet projects, such as the tree expropriation or a cable car-connected complex he is inserting in and around the historic district of Tbilisi.

Ivanishili and Cartu Group say the transplantation project is causing no environmental damage, and the Georgian Ministry of Environment nods in agreement. Local authorities crank out permits, even police are recruited to help with transportation. Police briefly arrested members of Peradze’s Guerrilla Gardening group when they tried to prevent the removal of that original liriodendron. The exodus of trees continues effectively unopposed.

An old Georgian maxim holds that a man’s duty in life is to build a house, raise a child and plant a tree. With four children and a grand spaceship of a palace overlooking Tbilisi, Ivanishvili certainly has the first two covered. But his interpretation of the third point, in many Georgians' minds, leaves something to be desired.