At the Victory Day celebrations in Tbilisi, pro- and anti-Russian Georgians struggled over how to remember the war. 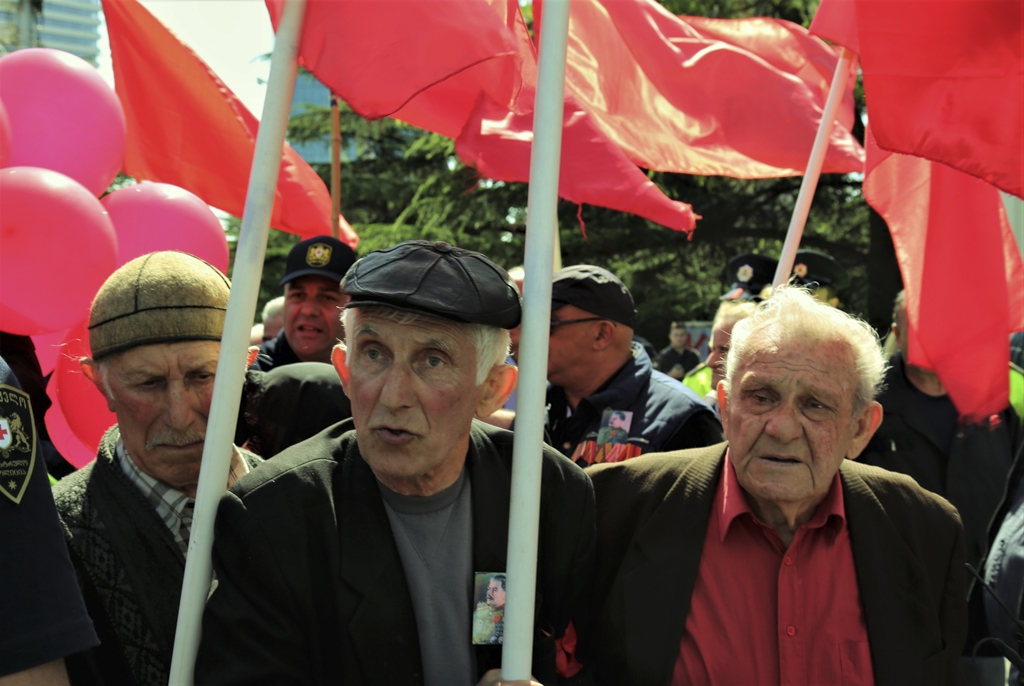 scenes from the May 9, or "Victory Day," commemoration in Tbilisi, Georgia. (All photos by Giorgi Lomsadze)

Georgia’s main World War II memorial became an ideological battlefield on May 9, a date celebrated as Victory Day in most of the ex-Soviet world. Feuding activists, primarily divided into pro- and anti-Russia camps, squared off in a struggle for the nation’s past and present.

In one corner were Georgians performing a local version of the “Immortal Regiment” – a Russia-born World War II commemoration movement in which descendants of those killed in the war parade while carrying portraits of their ancestors. The regiments have become a central part of the World War II commemoration in Russia and are backed by the Kremlin, which in recent years has used the Soviet victory over Nazi Germany as an ideological tool to shore up support for President Vladimir Putin.

The movement has spread to some other post-Soviet republics, where many resent what they see as a Russian propaganda tool exploiting the shared tragedies of World War II. “The organizations pretend to be celebrating victory over Nazism, and in fact are run by Putin and this is part of a hybrid war waged against Georgia,” Nino Danelia, an activist and journalism professor, told the news website Netgazeti.

In the morning, representatives of both camps gathered in Tbilisi’s Vake Park, and police formed a human chain to try to prevent them from clashing. 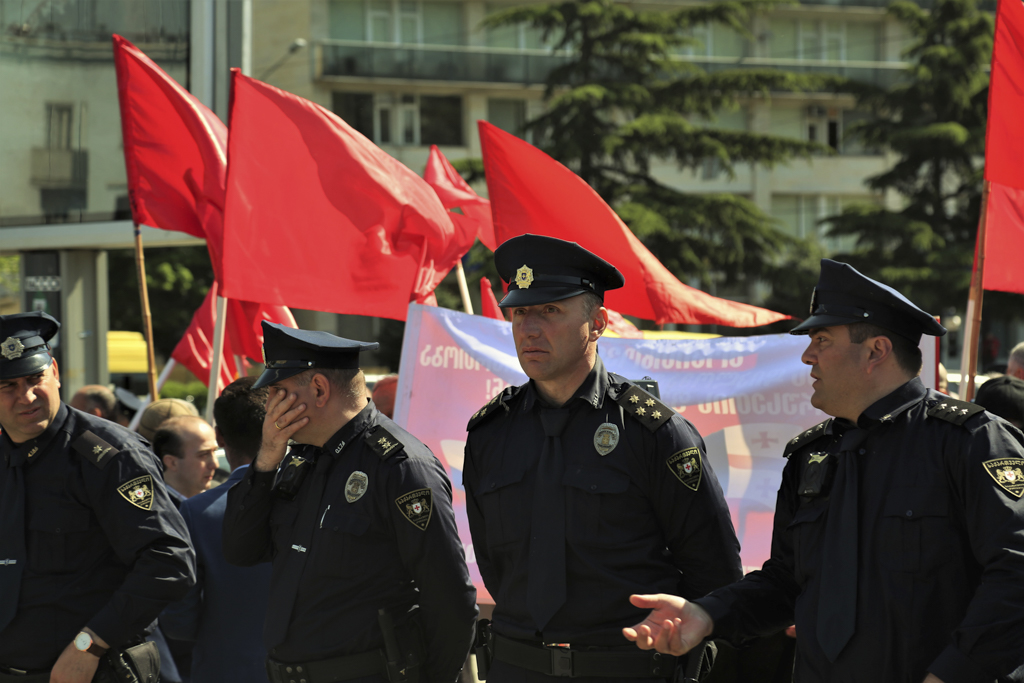 Red Soviet flags flew on one side of the police line, Georgian national white-and-red flags on the other. A poster of Soviet dictator Joseph Stalin peeped through the pro-Russia crowd. That camp also displayed photos of Georgians who died fighting alongside Russians in World War II. Their opponents hoisted photos of Giorgi Antsukhelidze, a Georgian soldier killed in 2008 during the war with Russia over South Ossetia.

“You want to erase history!” shouted the mostly elderly representatives of the Immortal Regiment, some of them decorated with Soviet war medals. They accused their younger opponents of diminishing the Soviet Union’s decisive role in defeating Nazi Germany and of disrespecting the memory of Georgians killed in that war.

The rival group responded by blowing into vuvuzelas and pounding on large drums. They said that Soviet flags and slogans were an affront to victims of Soviet purges and to the Georgians killed in the struggles against Russian imperialism.

“Why are they allowed to display Soviet posters and flags?” Giorgi Kalandia, an activist with the Russia is an Occupant movement, asked the police officers on the scene. “Displaying symbols of totalitarian regimes is prohibited by Georgian law. Do your job and enforce the law!” 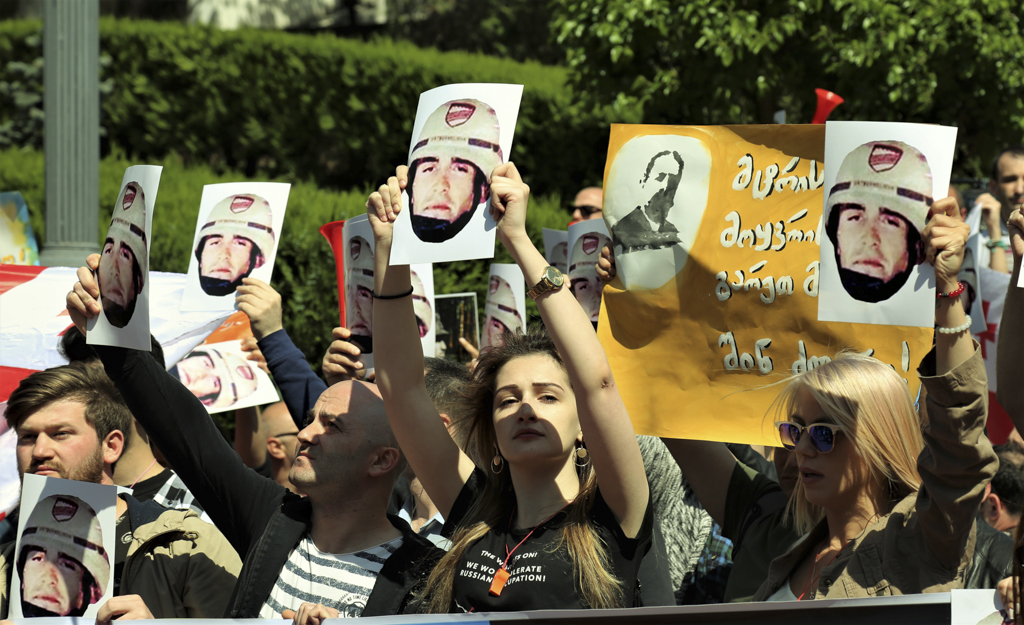 Kalandia is from Abkhazia, which broke away from Georgia in a war in the 1990s in which Russians backed the separatist forces. “Russians threw me out of my home, turned me into a refugee,” Kalandia told Eurasianet. Russia now has thousands of troops deployed in both Abkhazia and South Ossetia. “I’m here today because we have Kremlin-organized, neo-Communist propaganda going on in the heart of Georgia and the government is doing nothing about it.”

As the verbal battles raged, one middle-aged woman went over to the anti-Russia camp and pulled at a young woman’s hand. “Why are you doing this? This is our history,” she said, pointing at a photo of a man, purportedly a relative killed in World War II, pinned on her chest. “So is this,” parried the younger woman, extending a photo of Antsukhelidze.

Several tussles broke out at the event. Five individuals were arrested and later released. 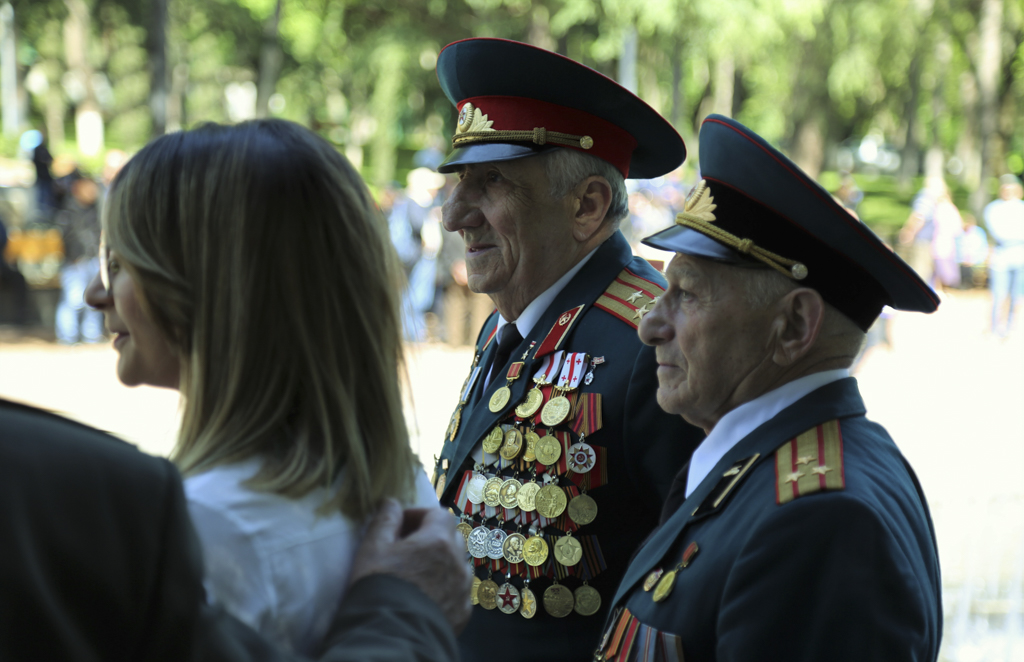 The competing rallies marched toward the city’s World War II memorial, where the main observances were held. The park was filled with police and a confusing array of activists, as each side divided into factions with varying views on how Victory Day should be observed. Some anti-Russian activists insisted that the day should not be observed at all, arguing that Georgians were merely used as cannon fodder in Russia’s war with Nazi Germany. Others said that it should be observed on May 8, as in most of Europe, and that commemorations should honor the victims of both the Nazi and Soviet regimes.

As per tradition, Georgia’s few surviving World War II veterans gathered by the Tomb of the Unknown Soldier, which was surrounded by a ceremonial guard. A group of fashionably dressed Russian tourists took selfies with guards and other participants in traditional Georgian costumes. A delegation from Russia’s Immortal Regiment movement, along with its Georgian chapter, laid wreaths at the tomb.

Georgia’s top government officials arrived to lay wreaths of their own and attempted to ignore the emotional debates raging around them. "Georgia made an enormous human sacrifice in this war,” Prime Minister Mamuka Bakhtadze said. “Hundreds of thousands of Georgians met a hero's end in this war and I would like to pay my respects to them."

That did not mollify activists.

“It was sickening to see the Georgian president and speaker of parliament stand there next to where red flags were flying and [Russian] agents mingled,” Aleko Elisashvili, founder of activist group Civil Movement, told reporters at the scene. “Today we mourn the 300,000 Georgians snuffed out in World War II and … we also mourn the victims of the Soviet occupation.”