He came on the invitation of a Russian-Armenian businessman who prides himself on his ties with Putin. 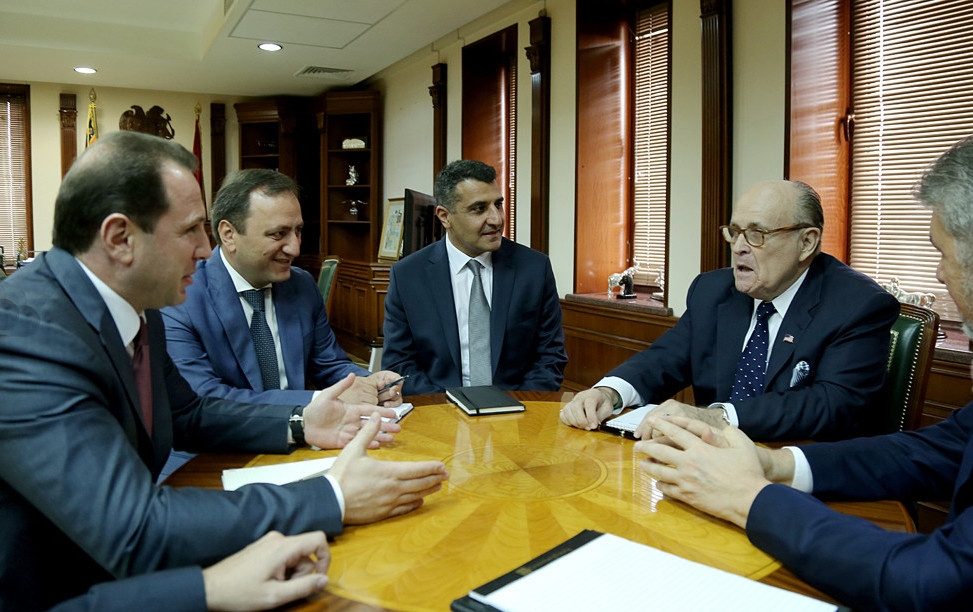 Rudy Giuliani at a meeting at the Armenian Defense Ministry on October 22. (photo: mil.am)

Rudy Giuliani, the personal lawyer of U.S. President Donald Trump, has visited Yerevan for a forum dedicated to the Eurasian Economic Union, a Russia-led economic bloc.

Giuliani, a former mayor of New York, has recently become known for his full-throated – and often facts-challenged – defense of Trump as the president bounces from one controversy to the next. But Giuliani said he was visiting Armenia only in his private capacity.

“I’m here as a private citizen, just to learn some facts in my first time in Armenia,” he told reporters on October 22 during a visit to Yerevan's genocide memorial. Asked by local reporters if he recognized the Armenian genocide – which the U.S. government has not formally done – he said he did. “I certainly recognize it. I think it is a historical fact, but I am not here in my capacity as a private lawyer for President Trump, I am here as a private citizen.”

Giuliani also laid flowers at the monument and planted a tree.

The same day, Giuliani visited the Ministry of Defense and met with Defense Minister Davit Tonoyan, who gave him a briefing on Armenia's security environment.

He came to Yerevan at the invitation of Ara Abrahamyan, a Russian-Armenian businessman and head of the Union of Armenians of Russia, who prides himself on his ties to Russian President Vladimir Putin. “He gives orders and I carry them out,” Abrahamyan has said of Putin. Abrahamyan also publicly opposed the rise to power of Nikol Pashinyan, claiming that the “real goal” of the protests that swept Pashinyan into office was destabilization and economic damage to Armenia.

It's not clear how Abrahamyan enticed Giuliani to Yerevan, but the American has a record of getting involved in other countries' politics for money. In August, Giuliani spoke out against an anti-corruption effort in Romania, contradicting the official position of the State Department. He later acknowledged that he did so after being engaged by a lobbying firm.

It didn't appear that Giuliani took part in any formal events connected to Eurasia Week, which began on October 22 and was the ostensible reason for his visit. “The aim of the Forum is to boost integration, growth of economic capacity and expand industrial cooperation between [Eurasian Union] countries,” the event's website says. The Eurasian Union is a bloc including Russia, Armenia, Belarus, Kazakhstan, and Kyrgyzstan, aimed at integrating the region's economies.

Despite the Russia-heavy focus of the event, Giuliani's visit could boost ties between Armenia and the U.S., said analyst Suren Sargsyan, who first broke the news about the trip on his Facebook page. “Our country’s leadership will establish a direct contact with him. The acquaintance will potentially promote also further ties with the U.S. leadership. He may be a contact person between Yerevan and Washington,” Sargsyan told Armenian newspaper Tert. Giuliani's visit will be closely followed by that of National Security Adviser John Bolton, another close Trump ally.

Giuliani's consulting company did not respond to an email from Eurasianet requesting comment. The forum continues through October 24.