The appointment has raised criticism that in its effort to depoliticize the judicial system, the government is instead repoliticizing it. 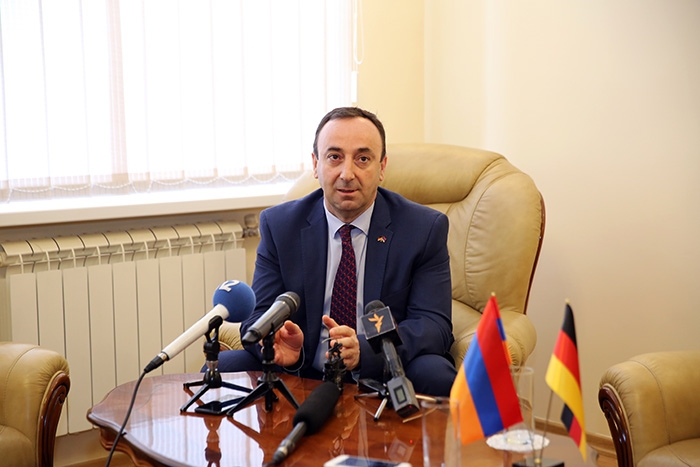 Hrair Tovmasyan, chair of Armenia's constitutional court, who has become the target of a campaign by the new authorities to oust him. (source: concourt.am)

Armenia’s parliament has confirmed a judge with close ties with many of the new authorities to the country’s highest court. The move, which comes amid an effort to reform the judicial system in order to depoliticize it, led many to suggest that the government is instead repoliticizing it in their favor.

On June 18, Vahe Grigoryan was approved as a member of the Constitutional Court by a 99-22 vote in the National Assembly. Grigoryan is a long-time ally of many of the current leaders in the country, best known as the lawyer representing the survivors of the victims of the “March 1 events,” the violent breakup of protests against alleged election fraud in 2008.

Grigoryan also featured in a series of leaked phone calls from last year in which it appeared that Prime Minister Nikol Pashinyan was intervening in a politically sensitive legal case involving prosecutions of members of the former government. In one call, Sasun Kachatryan, the head of the Special Investigative Service, said that Grigoryan would make public statements in support of arresting the former officials.

At his confirmation hearing, Grigoryan acknowledged his close ties with the current authorities. “I won’t hide that I have friends in the “My Step” bloc,” he said. “Our friendship is founded on an ideological basis, and that ideological basis is not at all based on party ideology. It was founded on common dreams and common goals – a free, democratic Armenia. Regardless of whether they are my friends or not, from the moment of being sworn in as a judge, a judge no longer has friends.”

Some opposition MPs, however, raised concerns about Grigoryan’s politics. “You said the constitutional court is a political body, if I understood it correctly,” said Mane Tandilyan, a representative of the Bright Armenia bloc, referring to previously published comments Grigoryan had made. “Then how do you imagine the decision made by a constitutional court judge to be impartial?” she asked.

Grigoryan was the third candidate nominated by President Armen Sarkissian for the position, which had been open since last year, but the previous two were rejected by the new parliament and some suggested that they were effectively decoys.

“Didn’t Sarkissian know that both his candidates would be rejected by the National Assembly and that ultimately he would present Vahe Grigoryan, the preferred candidate?” rhetorically asked Avetik Ishkhanyan, the chairman of the Helsinki Committee of Armenia, on his Facebook page. “I don’t think Sarkissian is so naïve,” Ishkhanyan added, suggesting that the president was only “playing democracy.”

Reform of the courts has been high on Pashinyan’s agenda since he took power last year, and he renewed those calls after a judge released on bail former president Robert Kocharyan, who is charged in connection with the March 1 events. That case has been referred to the Constitutional Court, but Grigoryan has said he will stay out of that case.

After Kocharyan was released on bail, Pashinyan called on his supporters to protest at courts and for judges “who know inside themselves that they cannot be impartial and objective” to resign. The head of the Supreme Jurisdiction Council of Armenia, Gagik Harutyunyan, subsequently resigned. “I no longer consider my work to be expedient,” Harutyunyan said in his resignation letter.

On May 31, Pashinyan discussed judicial reforms with an EU delegation led by the director general of the Council of Europe Human Rights Secretariat, Christos Giakoumopoulos, who offered public support and offered his body’s expertise to the reform effort.

“The problem is that by virtue of last year’s political developments, the Armenian courts don’t have the people’s trust, unlike the government and parliament. That is why courts’ rulings keep causing specific concerns in society; people simply do not trust the judicial system, and this can be a source of crisis,” Pashinyan said during the meeting.