In the first 11 months of 2019, around 6.2 million foreign nationals visited Uzbekistan, a 27 percent increase compared to the same period last year. 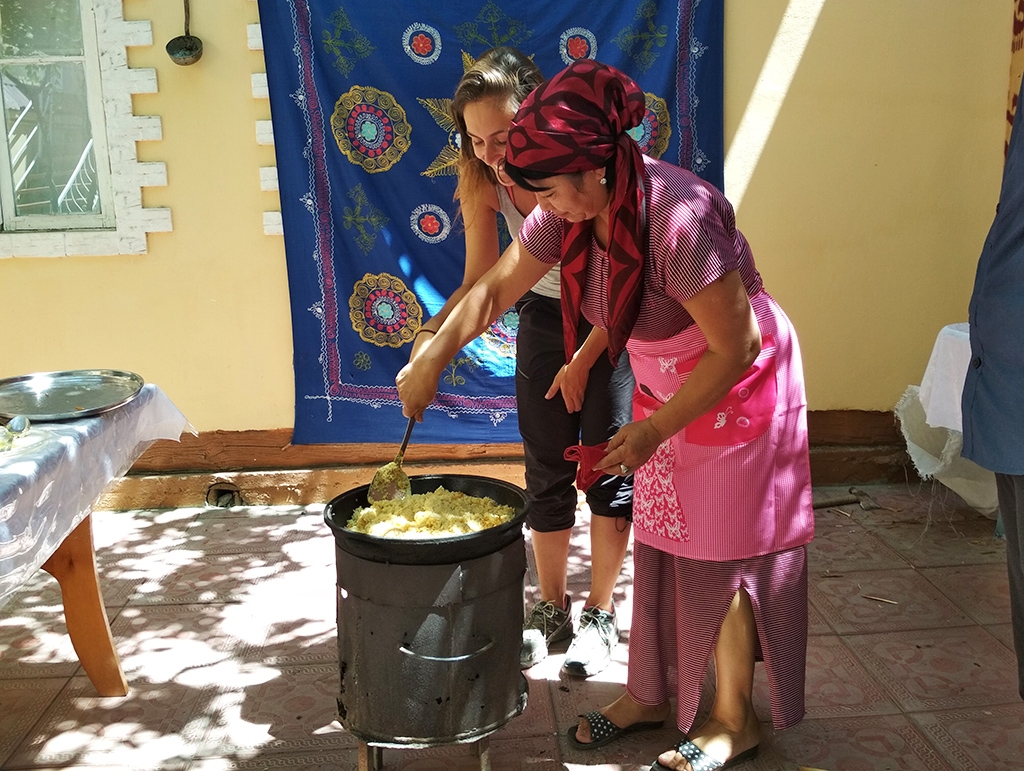 Nurhon Irgasheva gave up her work as a seamstress after opening a successful guesthouse in Bukhara earlier this year. Here she shows a French tourist how to make plov. (Eurasianet photo)

It was the spring of 2013 and a Japanese tourist had lost her way in the maze of streets of Bukhara’s old town. Driven to tears by her inability to locate her hostel, she knocked on the door of Nafisa Artykova.

Artykova quickly tried to put her distressed visitor at ease, offering her food and tea. After a long chat and as dusk descended, the Japanese traveler was accompanied back to her digs.

It was after this episode that Artykova first had the idea of turning her home into a guesthouse. The location, by the picturesque Chor Minor madrassa, was hard to beat.

But getting into that line of business was difficult in those days. Even now, foreigners staying in Uzbekistan are required to get slips of paper everywhere they stay to confirm that they have been registered with the local authorities. The bureaucratic headache that this involved pushed Artykova’s dreams off into the distance. And so, Artykova kept her day job working in a bank.

Then a repeat occurrence reawakened the dream.

“In March 2018, two tourists from Europe again knocked at my door and asked whether it would be possible to stay for the night. This reminded me of the incident with the Japanese woman. So, my husband and I began to think about how we could offer services to tourists and visitors to Bukhara,” Artykova told Eurasianet.

That August, the government changed the law to allow homeowners to turn their property into guesthouses. Families wishing to get into business were issued licenses and granted preferential loans from local banks.

Artykova’s family set aside four rooms in their home for the purpose of putting up guests. They borrowed from the bank and relatives and ended up spending $10,000 on renovations.

The guesthouse began accepting guests in March. They even remember the name of their first client – Ronald, from the Netherlands.

“This tourist season, rooms were going for $25-30 with breakfast,” Artykova said. “We have had many tourists and my husband and I are very happy.”

This fix came just in time to meet the swift uptick in demand. As part of President Shavkat Mirziyoyev’s agenda to open the country up to the world, nationals of 86 countries are now able to travel to Uzbekistan visa-free. In the first 11 months of 2019, around 6.2 million foreign nationals visited the country, a 27 percent increase compared to the same period last year, according to State Committee for Tourism data. With only 25,000 or so hotel rooms to go around, finding accommodation can prove challenging.

Few places have seized the opportunity as actively as Bukhara.

Artykova’s neighbor, 54-year-old Nurhon Irgasheva, has got in on the action too. Before she opened her guesthouse, she was a seamstress, making gold thread-embroidered curtains and clothing in the traditional Bukharan style. 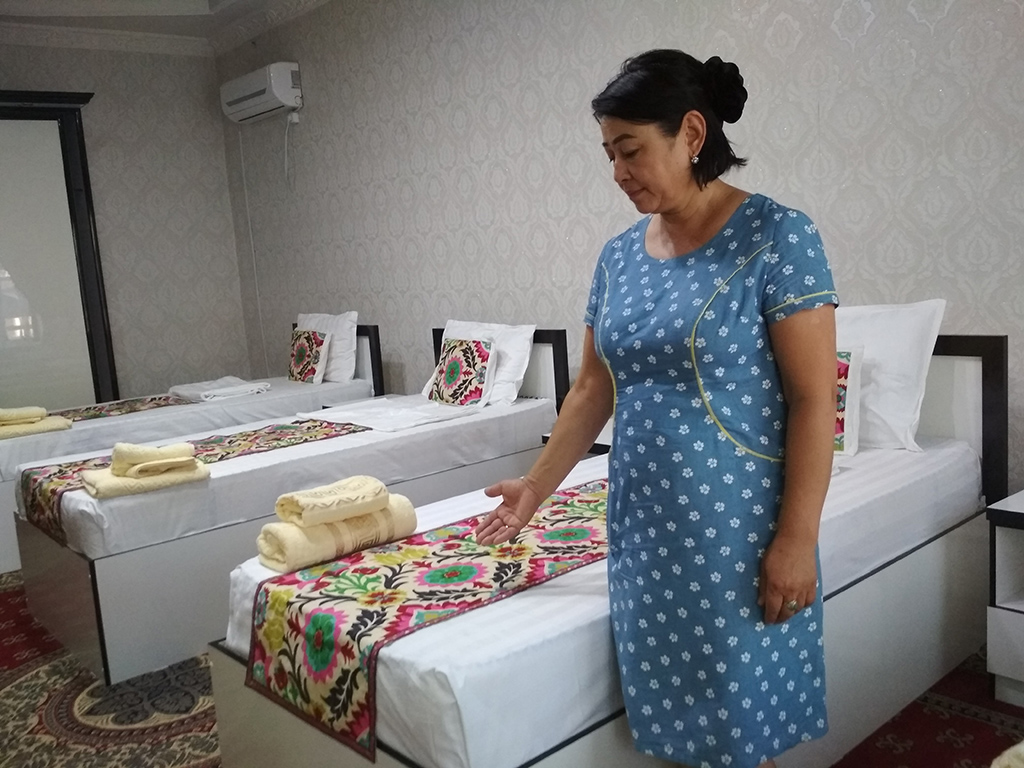 “We opened on March 6. We have 10 rooms and we took in guests over the entire season. We have started to enjoy this line of work so much that we stopped doing what we used to do,” she told Eurasianet.

The season in Uzbekistan typically runs from March to November. According to Irgasheva, that is the only shortcoming of the business, since she would be happier working year-round.

The tourist boom has even arrived in improbable places like Muynak – a desolate former port town stranded kilometers from the vanishing Aral Sea.

When Eurasianet visited, Dilbar Khudjamuradova’s home was a hubbub. Soup was bubbling away in a large pot in the kitchen. The smell of frying carp lingered in the air. Khudjamuradova and her daughter were preparing a table for 12 guests arriving from countries like France, Germany and Russia. The group was set to go for an excursion to see what remains of the Aral Sea.

“This is my first time in Uzbekistan, and I have always wanted to see Muynak and the Aral Sea,” Russian tourist Anton Zolotarev told Eurasianet. “The city is installing infrastructure, roads, water pipes. Construction is going on everywhere. The most important thing now is where to sleep.”

The idea of turning her home into a guesthouse came to Khudjamuradova in early 2018.

“When I saw tourists coming to Muynak, I thought: ‘Why not make it so that they could have a tasty meal and spend the night?’ I called my friends at a travel company in Nukus [the regional capital] and said that guests could stay with me,” she said.

To fund the business, she took out a loan at 7 percent interest from the Youth Union of Uzbekistan, a parastatal successor body to the Soviet-era Komsomol.

The guesthouse has had a palpable impact. It used to be that tourists came to Muynak for one day and then returned to Nukus, a mid-sized town 200 kilometers to the south, in the evening.

“Now we have two jeeps that carry tourists to the watery part of the Aral Sea. It is 200 kilometers from Muynak. Then we prepare [local] Karakalpak specialties – Beshbarmak and fish,” Khudjamuradova said.

According to tourism expert Akbar Ikramov, at least 869 guesthouses have opened across Uzbekistan to date. The reason for this rapid growth is the relative ease of the application process. If the conditions are right, it is now possible to set up shop within three days.

“Most of the guesthouses are in the Tashkent region, followed by Samarkand and Bukhara. The smallest number is in the [autonomous] republic of Karakalpakstan, where there are only 13 units. This region has only just begun turning its gaze to tourists,” Ikramov said.

Back in Bukhara, Irgasheva said she had started studying English and will keep it up until March, when business picks up again.

“The thing is that we don’t go abroad the way that foreigners do, so we are eager to talk with them. We find everything interesting – how simple people live, what they think about us and about my Bukhara. I am already retired and by talking to foreign tourists I have begun to look at the world in a whole different way,” she said.