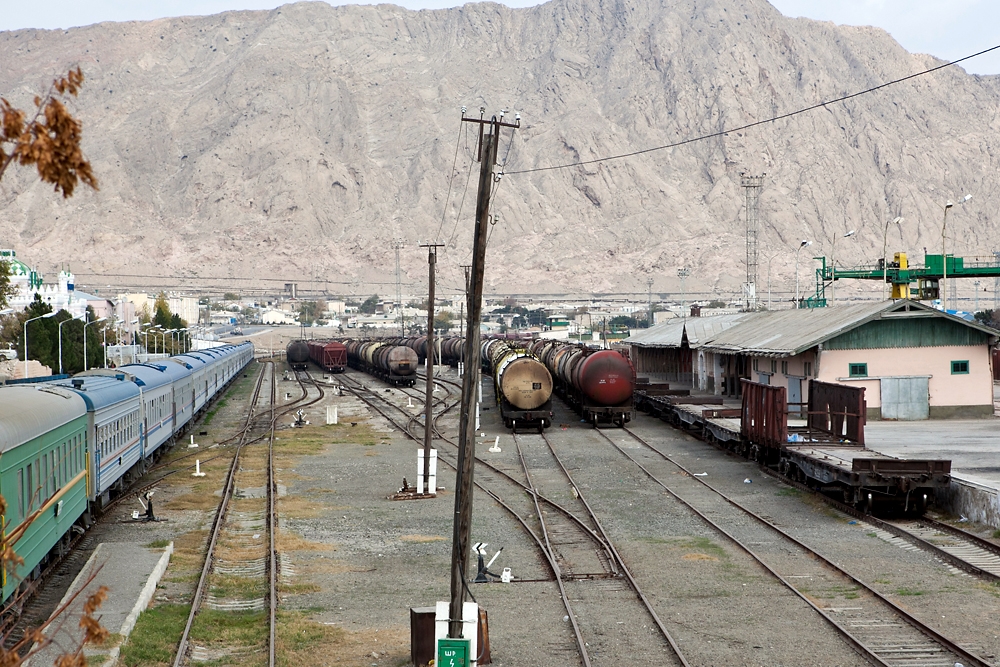 End of the line for the Turkmenistan-to-Tajikistan railway? (Photo: David Trilling)

The railway was supposed to diversify trade routes in one of the least-connected parts of Central Asia. But six months after workers broke ground on a new rail line from Turkmenistan to Tajikistan via northern Afghanistan, a dispute threatens to derail the whole project.

Dushanbe has hoped the 400-kilometer railway would help it bypass troublesome Uzbekistan, through which all its Soviet-era rails pass, and which has established a de facto economic blockade of its smaller, upstream neighbor. Tashkent is using hardball tactics in an effort to prevent Dushanbe from building the world’s tallest hydropower plant.

So Ashgabat’s railway plan offered a potential lifeline to Dushanbe. And by connecting Afghanistan, the project could be said to support Washington’s much-touted New Silk Road strategy, announced by former Secretary of State Hillary Clinton in 2011. The Asian Development Bank and Islamic Development Bank promised to support the estimated $2-billion project. Turkmenistan, which hosted a groundbreaking ceremony last June including presidents of all three countries, promised to finance its own 90-kilometer section, plus a 35-kilometer link to the northern Afghan town of Andkhoi.

But in recent weeks optimism about the project has dimmed. On January 29, the head of state-owned Tajik Railways, Amonullo Khukumatullo, announced that Dushanbe and Kabul had themselves decided on the route for the Afghan section of the rail. The announcement apparently caught Ashgabat by surprise because on January 31, the Turkmen Foreign Ministry protested that Khukumatullo’s declaration was "tendentious and absolutely unacceptable" and "counterproductive." Khukumatullo – a relative of President Imomali Rakhmon who has since been sacked over an unrelated scandal – said the new Afghan section was slightly over 200 kilometers, but shorter than the initial plan and thus would save Tajikistan in transit fees.

Turkmenistan's reaction may point to larger problems surrounding the feasibility of the project, including security in Afghanistan following the withdrawal of NATO forces, and Ashgabat's general attitude toward regional cooperation, says Luca Anceschi, a lecturer in Central Asian studies at the University of Glasgow. Turkmenistan tends to join transport and energy projects “without a serious commitment toward their completion," Anceschi told EurasiaNet.org. "Political factors, rather than geography, are obstructing progress."

Ashgabat's stance on the Tajikistan-Afghanistan-Turkmenistan (TAT) railway line follows a common pattern in its foreign policy: That is, "participating in pretty much every initiative that goes on, while maintaining a non-committal attitude, and withdrawing when more convenient," Anceschi explained. He noted other delayed projects, such as the Turkmen sector of the Kazakhstan-Iran railway line, which is three years behind schedule, and the long-stalled Turkmenistan-Afghanistan-Pakistan-India (TAPI) gas pipeline. "I see a parallel between Ashgabat’s attitude in the TAT and its behavior in the construction of the Kazakhstan-Turkmenistan-Iran railway line."

Rashid Gani Abdullo, a Dushanbe-based political analyst, dismissed Ashgabat’s claim that the Turkmen were unaware about the Tajik-Afghan plans "because they [the plans] were well covered in the regional press." He also said Ashgabat could have used diplomatic channels to raise its concerns, instead of going public. "I don't think that its [Turkmenistan's] argument about the coordination of positions of the two countries on this issue would have been ignored by the Tajik side because Tajikistan values its relations with Turkmenistan," Abdullo told EurasiaNet.org.

Turkmenistan often sides with Uzbekistan in water disputes, giving Dushanbe plenty of reasons to worry about Ashbgabat’s reliability. A breakdown in the relationship should also worry China, which is planning to build a new gas pipeline from Turkmenistan across Uzbekistan and Tajikistan. Some have speculated that the pipeline, known as “Line D,” is intended as insurance to supplement current routes and could possibly, like the railway across northern Afghanistan, skip Uzbekistan all together. The exact route is still unclear, though the project is due to be completed in 2016.

Along with political concerns, the economic feasibility of the railway may be in doubt. For TAT to be economically expedient, two concerns must be addressed: transit potential and the volume of goods going to and from Tajikistan, says Jacopo Pepe, an expert on the region’s energy and transport infrastructure at the Free University of Berlin.

The transit trade would ideally come from China, the region’s largest investor, which has shown interest in new railways in Central Asia. A decision on a long-mooted project from China to Uzbekistan via Kyrgyzstan has been delayed because of Bishkek's insistence on a version of the route unpalatable to other potential partners.That makes the Tajikistan line likely appealing in deep-pocketed Beijing. TAT’s feasibility “will depend on China's interest in backing the project. This could be the case, if China still faces a stalemate with the Kyrgyzstan project," Pepe told EurasiaNet.org.

The TAT’s teething problems are symptomatic of constant troubles with regional cooperation in Central Asia. "The lack of coordination [over the route] testifies once more how regional cooperation in Central Asia can be somehow irrational, even in the presence of common interests in the realization of such a relevant trans-boundary project,” Pepe said.