One official estimates the territory lost over 80 percent of its access to water during the war last year. 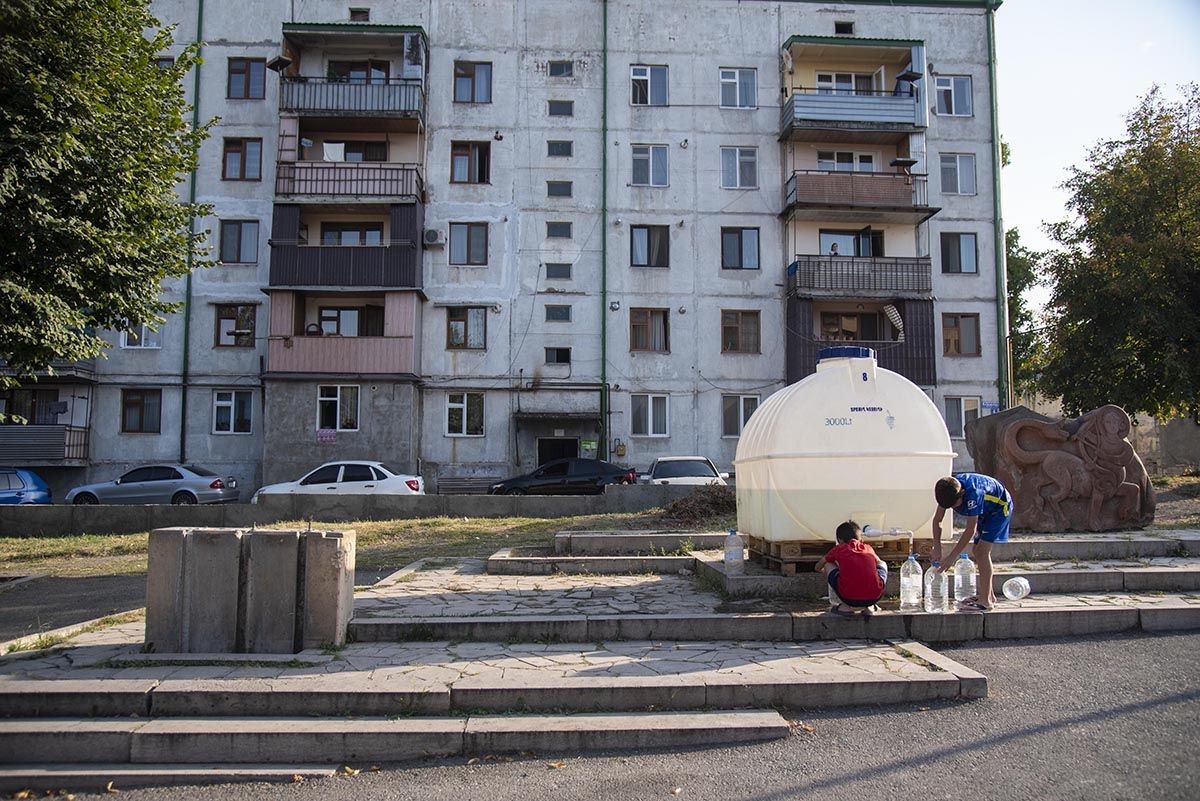 Children in Stepanakert fetch water from a tank provided by the Red Cross. (David Ghahramanyan)

Forty percent of Stepanakert has been without running water for the past month. It is a new burden for a city that has struggled to revive normalcy since the war between Armenia and Azerbaijan last autumn.

Residents of Nagorno-Karabakh’s de facto capital are condemned to thirst by a confluence of factors: Internally displaced people have packed into the city, increasing the population by some 30 percent; access to most of the region’s water supply was lost in the fighting; and it has been a hot, dry summer.

“We haven’t seen rain in over 50 days and temperatures have peaked at a steady 30 degrees Celsius. Add to that the 70 to 80 thousand cubic meters more consumed monthly by the 15,000 new residents of the capital fleeing war and you get what we’re seeing,” Gagik Poghosyan, who heads Jrmugh-Koyughi, the public company responsible for local water distribution, told Eurasianet.

During the 44-day war with Azerbaijan, Armenian forces lost control of most of the lands they had held since the early 1990s, including reservoirs and canals that are now on the other side of the front line. In a June report, the International Crisis Group described several villages without water, “not only because pipes were destroyed, but because in order to fix them plumbers would have to enter an area controlled by Azerbaijani soldiers.”

At an emergency meeting on August 16, de facto president Arayik Harutyunyan unveiled plans to connect the capital’s water supply network to the nearby Patara River (Badara in Azerbaijani) through a new pipeline that will end the shortages “within one year.”

Harutyunyan also promised to build a new dam on the Patara to create a reservoir that will provide Stepanakert and 12 surrounding villages with drinking water and irrigate over 2,500 hectares. Estimated at 15 billion Armenian drams (over $30 million), the project is the most ambitious of its kind to date, Harutyunyan said.

A new government water committee is etching out plans to drill over 40 artesian wells to provide round-the-clock service to communities across the region. Georgi Hayriyan, who was appointed by the president in July to lead the committee, estimates water losses at “over 80 percent.”

“What makes this so painful is that the resources still available to Artsakh aren’t going to be enough to irrigate whatever agricultural land is left,” Hayriyan told Eurasianet, using the Armenian name for the region.

The government is counting on the state budget and help from outside organizations like the diaspora-backed Hayastan All Armenian Fund to make the three projects happen. Another diaspora group in Washington is lobbying Congress for $25 million in assistance related to water and sanitation.

Russian peacekeepers – who have patrolled Nagorno-Karabakh since the Moscow-brokered ceasefire in November 2020 – are providing water and security while Armenians repair infrastructure near the front lines. In the three weeks to September 3, the Russian contingent dispensed over 200 tons of drinking water to 1,500 Stepanakert residents, promising to continue to “provide local residents with water every day” until a new pipeline can be laid.

British charity HALO Trust and the International Committee of the Red Cross have also extended help. “The current water scarcity only added to the practical difficulties faced by the population following the autumn 2020 escalation,” Bertrand Lamon, head of the ICRC Mission in Nagorno-Karabakh, told Eurasianet.

Twenty-five large water tanks donated by the Red Cross have been installed in neighborhoods hit hardest by the shortage and are being filled daily by trucks from the city’s water company.

With this aid, and efforts by local authorities to conserve water, the situation in Stepanakert has slowly improved over the past two weeks. But Poghosyan of the public water distributor remains wary. “If this weather persists, things could get dire,” he said.

For all their inconvenience, “there’s still a silver lining to these shortages,” said Nune Martirosyan, 47, an economics teacher in Stepanakert, whose own apartment has been without water for a month. “They’ve fostered a greater sense of community among residents as they scramble to help each other pull through.”