Heavy metal fights to survive, and bridge communities, in the Caucasus

The rock scene in the South Caucasus is shedding its political baggage. 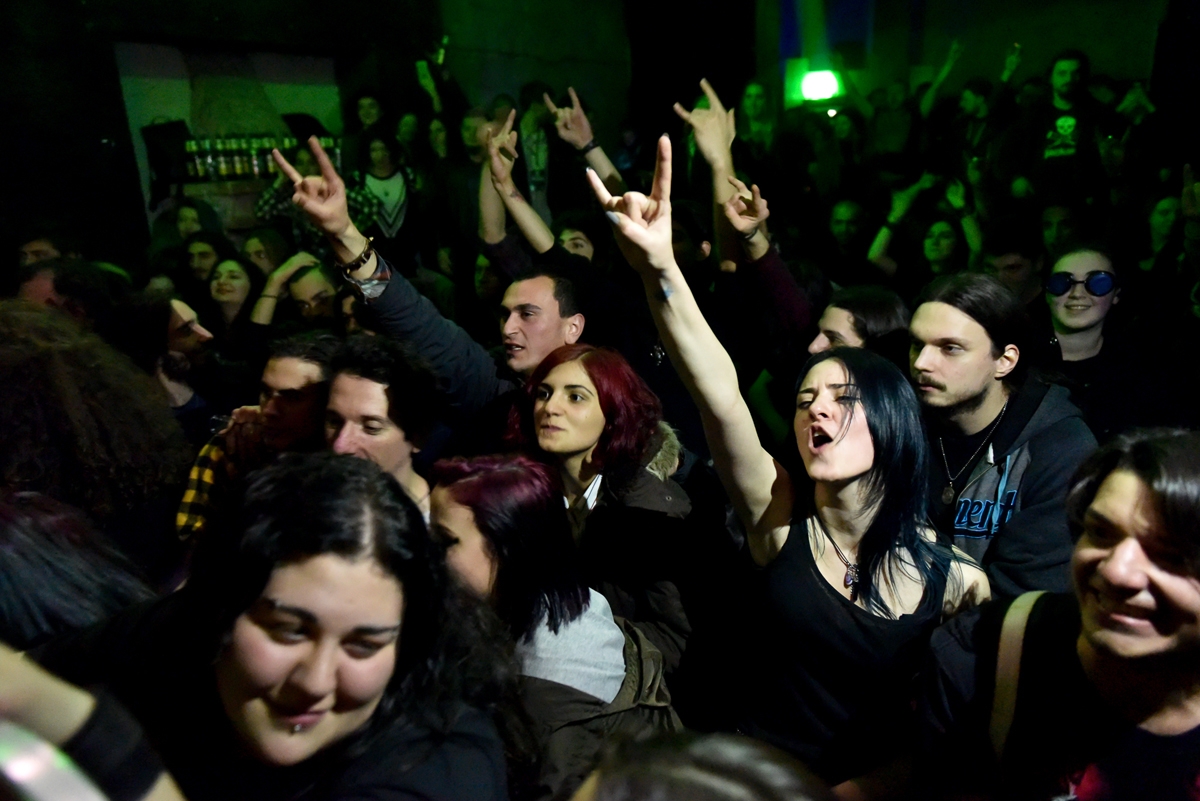 Audience at the March 17 Caucasus Metal Battle in Tbilisi, Georgia. (All photos by Onnik Krikorian)

In a damp, dimly lit tunnel underneath Tbilisi, a singer, clad in all black, takes to the stage in a haze of cigarette smoke and strobe lights. After dropping an F-bomb, Gio Xurcilava, singer for the Georgian death metal band Infadus, references Satan: “I want you to yell so loud that even The Beast will hear us tonight!”

Infadus is one of eight bands from Georgia, Armenia, and Azerbaijan taking the stage this evening to churn out crunching riffs and thunderous drumbeats. Onlookers bang their heads viciously, making devil horn gestures in appreciation of the performers' technical prowess.

But theatrical allusions to Satan, as well as the gothic aesthetic of many of the assembled fans, are somewhat out of step with the traditional religious conservatism of the Caucasus.

Despite going underground, however, the situation for local metalheads is improving.

“Georgia remains a deeply religious and conservative society,” Eric Hutchence, organizer of the Caucasus Metal Battle and JAM! told Eurasianet. “It’s true that we’ve had problems with extremists over the years, but attitudes are slowly changing.”

Hutchence – who is also the chairman of Georgia’s Rock Music National Association – said he first started listening to hard rock as an eight-year-old, when he came across a record by the German band Karussell while living in East Germany (he was born Ernst Khechumov and uses Hutchence as a nom de rock). His family moved to Georgia when he was 10, and he now runs the company “JAM Events” to promote artists and organize local concerts.

His current project pits bands from across the region against one another for a chance to perform at Germany’s Wacken Open Air festival – one of the biggest live events on the hard-rock circuit. He hopes that regularly sending bands to the festival will put the Caucasus on the musical map.

“We have a strong metal community here and we can see it growing step by step as more people attend our concerts,” he told Eurasianet.

Communist Georgia’s leading official at the time, Eduard Shevardnadze, hoped the festival would pacify the republic’s unruly youth following nationalist demonstrations in Tbilisi in April 1978. By channeling their energy into rock, he aimed to co-opt protest while solidifying his image as a liberal ruler.

Since gaining independence from the USSR in 1991, leaders in the Caucasus have followed that example, on occasion using rock music to present their countries as hip and modern. In 2010, Armenian Prime Minister Tigran Sargsyan organized several big-name concerts, including British rock legends Deep Purple, in Yerevan. Armenia's leadership also has embraced the California-based Armenian-American metal band System of a Down, whose front man, Serj Tankian, has made himself into a sort of cultural ambassador for the country.

Not everyone is a fan.

In 2010, Armenian authorities arrested anyone suspected of being an “emo” – a name given to fans of a melancholic form of punk rock. Authorities argued that the gloomy music was undermining social stability and driving teenagers to suicide.

In Azerbaijan, two rock musicians from the band Bulistan were arrested in 2012 after they performed at a protest rally in Baku. The rock stars were reportedly beaten up by police and charged with “petty hooliganism.”

More recently, on March 26, police in Nagorno-Karabakh arrested a young woman, Asya Khachatryan, because of her blue hair. When she demanded an explanation she was reportedly slapped across the face and told “a woman shouldn’t smoke or dye her hair blue.”

Such misogyny is not uncommon, and many metal bands actively try to combat this prejudice. One such band is Euphoria, an all-female group from Armenia.

“We write about feminism, equality, and hope,” the band told Eurasianet in an email exchange. “We try to reach the very people who would find our music and themes new and controversial since we want to use our music to promote social change.”

Euphoria say they “almost always” face sexism in Armenian society, even among fans of rock music.

“Some people think metal is not a genre for women to play, and some of them dislike the issues we are raising in our music,” they said. “Thankfully, our families are very supportive of our work and appreciate the fact we are brave enough to create our kind of music in Armenian society.”

Sexism and religious conservatism are just two of the problems facing up-and-coming bands. Another challenge is the region’s geopolitics: Armenia and Azerbaijan are mired in conflict, and bands of any genre are unable to travel between the countries, leaving only Georgia as neutral ground.

This further complicates the financial troubles faced by musicians around the world, and many of the Caucasus Metal Battle participants have to work side gigs.

“Most musicians, myself included, are earning money by joining cover bands,” said Mikhail Rafiyev, front man of the Azerbaijani rock outfit Euthanation. When he's not playing metal, Rafiyev can be seen in Baku’s trendy bars performing an eclectic range, from lounge music to pop to blues.

Following Mikhail Gorbachev’s political reforms in 1987, the hardline Armenian nationalist band Vostan Hayots toured Communist Armenia to perform a rock opera about the 1915 genocide. When the Karabakh conflict broke out the following year, nationalist organizations funded a tour across the region to help mobilize Armenians. While Azerbaijanis would throw rocks at the group, fans would burn neighboring Azerbaijani villages to the ground after the band performed.

System of a Down has long played an active role in regional politics, and following the April 2016 fighting in Karabakh, Tankian wrote a politically charged song called “Artsakh,” containing lines like “fly the tricolor flag of justice” and “we are going to prevail by being Armenian.”

“I do not believe in wars and ultimately borders but I deeply believe in self-determination and life without oppression. Therefore, it is time for the world to recognize [Nagorno-Karabakh] as the Republic of Artsakh,” he told Rolling Stone that year.

At the Caucasus Metal Battle, though, politics was abandoned in favor of head-banging. After all the competitors performed, the previous winners, Tbilisi's “Scratch the Floor,” took the stage. The bass player's T-shirt read “Kill the Kardashians” – but in this context it was a middle finger to consumer culture rather than anything related to Armenians.

Hutchence said his goal was to take politics out of the music and bring fans together in a fun, relaxed environment.

“Lots of money is being spent by huge NGOs to bring people in the region together – and most of them don’t work,” he said. “We work with no grants, and no political slogans, and yet we’re succeeding in bringing young people together.”