China is evidently the market on which the EAEU is pinning its hopes of export diversification. 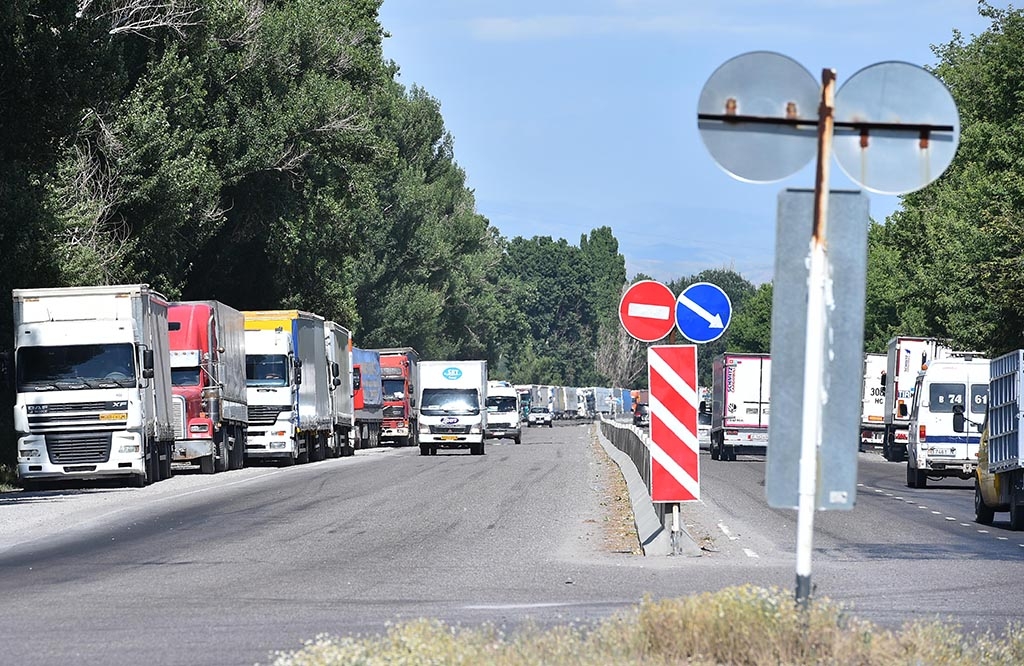 Let us in! Kyrgyz trucks wait at the Kazakh border. (Kyrgyz government handout)

The Eurasian Economic Union is, first and foremost, an exporter of raw materials. This has left it especially vulnerable to the coronavirus pandemic-linked slump in global demand for such goods.

Data from January-April show what the Russia-led bloc classifies as mineral products constituting 62.6 percent of trade with non-EAEU members. Metals and metal products accounted for another 9 percent. Food and agricultural goods made up a relatively paltry 7.2 percent. Four-fifths of the exporting is done by Russia.

The implications are evident in the dollar figures.

Compared with the same period in 2019, the value of the EAEU’s exports had dropped by 17.7 percent, to $126.5 billion. Imports, which are primarily machinery and vehicles (41.8 percent) and chemical products (18.8 percent), fell by a less sharp rate of 5.9 percent, to $77.3 billion. Russia and Belarus have been the hardest hit exporters, in contrast with Kazakhstan and Kyrgyzstan, which have kept levels almost wholly stable.

Trade with non-bloc members will also have been depressed by the temporary ban, imposed on April 12 by consensus, on the export of food products such as flour, rice, various cereal grains, onions, garlic and turnips. To the relief of those agricultural producers dealing with third countries, however, that ban was allowed to expire on June 30.

This should be greeted eagerly by Uzbekistan, which imports most of the vegetable oil, soybeans and sunflower seeds it needs from Kazakhstan and Russia.

Intra-bloc affairs are still going through less than ideal times too. The unceasing low-intensity background noise of Kazakh-Kyrgyz bickering took some new turns over the past month.

The Kyrgyz Economy Ministry on June 9 issued a statement to argue that Kazakhstan’s administration of their shared border is in violation of requirements on the free movement of goods. “Waiting time at the border on the way to Kazakhstan, according to drivers, ranges from three to four days,” the ministry said. If almost 86,000 transport vehicles had crossed the border in March to May in 2019, that number had dropped to around 32,000 in the same period this year, the ministry continued.

Nur-Sultan, meanwhile, contends that Bishkek turns a blind eye to colossal amounts of smuggling from China and the mislabeling of cargo headed to the rest of the EAEU, and that this fact requires their customs officers to step up inspections.

Kazakhstan is adopting unilateral action on this front by bolstering the arrangement by which it exchanges data on what goods it trades with China. This should also apply to goods arriving via third countries. The bilateral arrangement was provisionally signed in June 2019 and has now been ratified by Kazakh President Kassym-Jomart Tokayev and is intended, officials say, to speed customs procedures. Kazakhstan has been battling with its own smuggling scandals – quite how intensely is a matter of opinion, perhaps – but it is difficult not to also see this as an arrow across Kyrgyzstan’s bow. Kazakh customs officials should theoretically become increasingly less reliant on dubious Kyrgyz cargo data.

China is evidently the market on which the EAEU is pinning its hopes of export diversification. A subsidiary of state-owned Russia Railways and a Chinese company called YuXinOu in November created the joint enterprise Agroexpress, which will manage the transportation of Russian food products like flour, soybeans, confectionery and frozen chicken on high-speed refrigerated container trains to the city of Chongqing. (Some of the poultry that ends up in McChicken sandwiches in McDonalds restaurants in China comes from Russia). The U.S.-Chinese trade war has opened up a horizon of added opportunities for Russia, whose Agriculture Ministry revealed last year, for example, that the country will take soybean production to 7.2 million tons by 2024, an increase of 75 percent.

The Eurasian Economic Commission, the executive body of the EAEU, said in a statement on June 22 that this railroad-based conveyor belt of food to China should be expanded to all the bloc’s members. The logistics are hazy for the time being, but the whiff of opportunity is compelling.

Recurring disputes, not to speak of the anticlimactic and inconclusive Eurasian Economic Council heads of state summit conducted on May 19 via video conference, fuel the doubts of skeptics. The naysayers have got considerable pushback, however, from EAEU champions, whose defensive articles constitute something of a cottage industry. Arguments often sound like the one made by Yuri Kofner, a researcher with Moscow’s Skolkovo Institute for Emerging Market Studies, who contended in a recent op-ed that the dissolution of the common Eurasian economic space and the restoration of border tariffs could cause the economy of Belarus, for example, to shrink by one-fifth. Kyrgyzstan would fare little better, Kofner argued, with its economy losing 14.2 percent of its value. Russia would be largely unaffected, though, he said, as if to underline the project’s putatively bighearted underpinnings.

Developments that junior members of the bloc – everybody other than Russia, in other words – would like to see happen as soon as possible are the formation of single markets for natural gas and electricity. The roadmap for a single power market was reportedly approved on June 22, setting the stage for the idea to become reality by no later than the beginning of 2025.

Even more merrily, makers of wine and champagne in Armenia, Belarus, Kyrgyzstan and Kazakhstan may be on the cusp of being allowed to advertise their wares in Russian media. Under Russian law, that privilege is only afforded to grape-based alcohol brands produced inside the country and in the Crimean Peninsula, which Moscow deems to be part of Russia. The State Duma in June approved a second reading of the legislation to change advertising rules.