There is no setback in the EAEU, it would appear, that cannot be fixed with a roadmap. 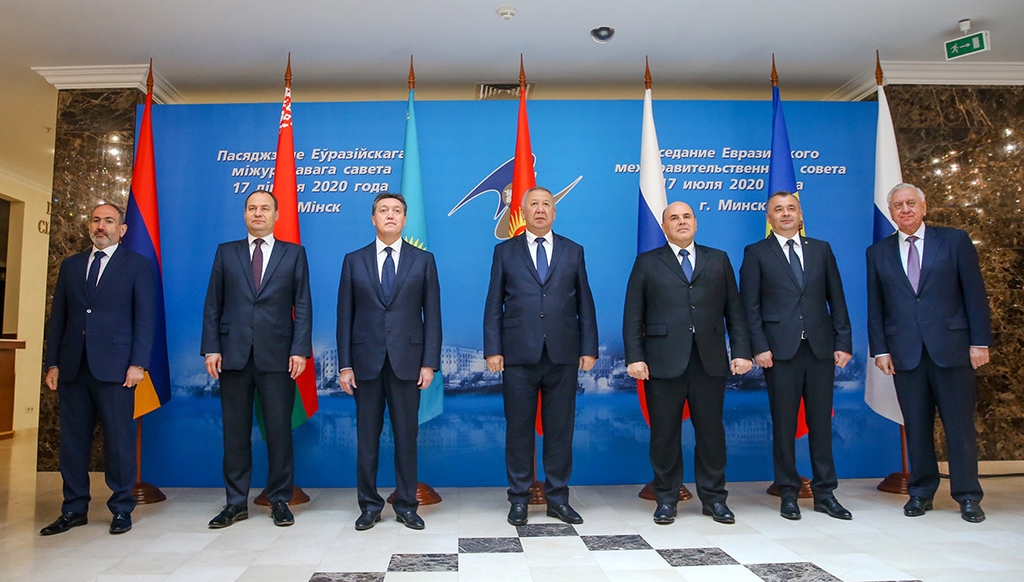 Heads of government from Eurasian Economic Union nations emerged from their coronavirus bunkers last month for their first face-to-fate meet since the pandemic was first declared.

Fittingly enough, the spread of COVID-19 was front and center of the talks in Minsk on July 17 as the five prime ministers agreed on a joint plan of action to contain the outbreak. In truth, though, the only thing EAEU members have managed to sync so far is notching up equally dismal records fighting their respective outbreaks.

Belarusian President Alexander Lukashenko even claims to have contracted the virus himself, although he says he experienced no symptoms. That was behind the curve regionally. Armenian Prime Minister Nikol Pashinyan announced he had tested positive for COVID-19 – also symptomless – back in June. Kazakhstan’s former president Nursultan Nazarbayev said he had it in June.

There was other business at the summit too as the prime ministers adopted two roadmaps for cooperation, concerning the agricultural industry and industrialization, respectively.

The agroindustry agenda looks exceedingly thin compared with analogues in, say, the European Union. The roadmap is little more than a list of standalone or cooperative projects. One stated intent of this planning is to avoid “duplication of production.” Awkward conversations may occur further down the line as bloc members wrangle over who is responsible for what.

Another strand of the agroindustry roadmap is aimed implementing a region-wide import-substitution agenda. Russia has because of its own geopolitical dramas for years been slapping food import bans right and left as a way both to spite its Western partners and help prop up its own underdeveloped agricultural sector. But it is questionable whether such a model is either realistic or desirable for EAEU nations at the periphery.

The import-substitution philosophy is an even more pronounced feature of the industrialization roadmap.

This document consists of three sections. The first lists 178 “large projects” in 18 areas of industry requiring investments of around $200 billion. The point of these projects being coordinated through the offices of the EAEU is again to avoid overlap and duplication, according to the Eurasian Economic Commission, or EEC, the executive body of the EAEU. Another, slightly hazier, section of the roadmap envisions supporting hundreds of small- and medium-sized tech companies to form a finely tuned bloc-wide production chain – again to obviate reliance on technological imports. A third prong of the strategy, also very vague, talks about work on limiting the need for importing commodities into the EAEU area.

Addressing the coronavirus pandemic and the task of developing agriculture and industry imply vastly different timeframes, but there are some areas of convergence. As in the rest of the world, the EAEU has been assailed by a joblessness crisis. According to data provided by the EEC, around 3.1 million people in the bloc were recorded as unemployed at the end of July, before the crisis really began to bite. That is almost three times the number seen around the same time in 2019, and almost certainly a colossally inaccurate undercount anyway. Nowhere has it quite as bad as Armenia, which was recording 17.9 percent unemployment at the end of last year. Although, again, it is quite likely that labor statisticians in Yerevan are counting more reliably than their colleagues in impoverished Kyrgyzstan, who were reporting a relatively paltry 6.2 percent rate of joblessness in 2018.

The three-part phrase “barriers, exemptions and restrictions” is a recurring mantra in EAEU discussions about the easing of conditions for trade within the bloc. To consider the first of these – barriers – this refers to unilateral rules enforced by members that contravene agreed-upon EAEU legislation designed to permit the free movement of goods, services, capital and labor.

A 2016 white paper produced by the EEC offers a few illustrations of the kind of thing this might constitute. Belarus, for example, applied a reduced rate of sales tax on certain goods produced domestically, but did not extend the same privilege to items imported from other bloc members. Another still-topical case was the situation on the border of Kazakhstan and Kyrgyzstan, wherein Kazakh authorities subjected Kyrgyz imports to mandatory phytosanitary inspections.

EEC chairman Mikhail Myasnikovich said at the closure of the prime ministerial summit that significant progress is being made in this area of regulatory tension. “Everybody has talk of barriers on their lips,” he said. “This year alone we eliminated nine out of these 15 barriers. And there is an understanding that interferences in the internal market need to be resolved quite quickly.”

Lukashenko, his compatriot, had a less glowing assessment while talking in Minsk to the Armenian prime minister, Pashinyan, however: “We still have enough barriers. Our interstate borders have been so badly afflicted by barriers that businesspeople often say: ‘Why don’t you just throw up borders between the states, that would be simpler and easier.’”

Indeed, the EEC is sending mixed messages on its evaluation of intra-bloc protectionism. Only days before the Minsk summit, Myasnikovich announced the creation of a committee, to be chaired by himself, that will devise a roadmap on how to address recurring disputes. There is no setback in the EAEU, it would appear, that cannot be fixed with a roadmap.

It’s all enough to drive anybody to drink. But what drink?

Alcohol is one of the most fraught issues bedeviling the EAEU. Russia, with its costly certification of approval procedures, is the main spoiler on this front.

Negotiations to bring down alcohol protectionist hurdles are older than the EAEU itself, so it should in theory mark something of a breakthrough when a collectively agreed technical harmonization document titled “On the safety of alcoholic beverages” enters into force next year. But as Ilya Zakharkin wrote in an analysis published on July 30, this may end up having limited effect since Russia continues to devise new impediments.

Under a law in Russia that came into effect in June, only vintners making product with exclusively domestic ingredients can market their drink as “Russian wine.” Anything made with foreign inputs must instead be described as a “grape-containing drink,” which rules out blending with wines from EAEU members – an explicit violation of bloc rules, Zakharkin contends.