Hypocritical election congratulations underscore the cold strategic underpinnings of a bloc that is as much about politics as it is about trade. 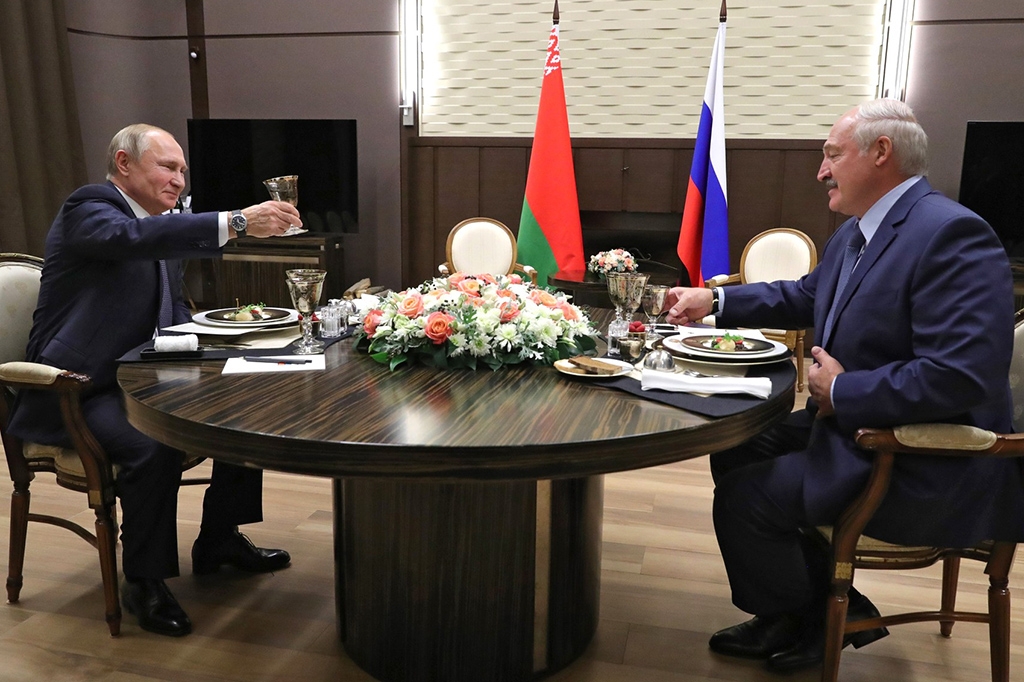 When Alexander Lukashenko claimed his contentious victory in the Belarusian presidential election last month, partner nations in the Eurasian Economic Union were among the first to offer their congratulations.

Even Armenian Prime Minister Nikol Pashinyan, who came to power on the back of the type of pro-democracy protests that have been playing out in Minsk and elsewhere in Belarus, joined that chorus. And never mind that Lukashenko had in April 2018 congratulated Pashinyan’s political foe, Serzh Sargsyan, on his appointment as prime minister – the very act of constitutional trickery that precipitated his downfall.

The hypocrisy underscores the cold strategic underpinnings of a bloc that is as much about politics as it is about trade. Questions still linger, however, about what the evolving situation in Belarus implies for the EAEU.

Speaking to Moscow-based publication Eurasia.Expert, Yerevan-based analyst Alexander Iskandaryan argued that one consequence would likely be the dilution of the ruling system’s domestic authority, which would in turn weaken its ability to negotiate with external partners – namely Russia.

“The situation in Belarus influences integration processes in the EAEU and [the Collective Security Treaty Organization] because the situation will, with a high level of probability, enfeeble the authorities,” Iskandaryan said. “Whoever is in power in Belarus will understandably enjoy a lower degree of legitimacy than what came before.”

The impact on trade of Lukashenko’s shrinking domestic and international options is already plain to see. In late August, three Baltic neighbors to the north – Lithuania, Latvia and Estonia – announced that they were slapping travel bans on Lukashenko and dozens of other top Belarusian officials.

The Belarusian president reacted by indicating that he will reorient the transit of his country’s goods away from Lithuania’s ports and toward Russia.

“Of course, this will be a little inconvenient for us. But we can agree with the Russians on tariffs, and they will in any case stand to profit from our cargo transshipment,” Lukashenko said on September 1.

As Reuters news agency points out, this is no paltry affair, since “goods from landlocked Belarus account for almost a third of Lithuania's rail traffic and port volume.”

In yet another potential prospective development that could be greeted with satisfaction in Moscow, Lukashenko has threatened to block European companies from exporting goods through his country to Russia. It has long been contended that Belarusian re-exporters are making an easy profit by simply relabeling European Union-made food goods as their own product, thereby circumventing Russia’s anti-EU countersanctions.

A change of guard, were Lukashenko to fall, will usher in a period of uncertainty that it is pointless to speculate about.

But the maintenance of the status quo appears certain to further serry the EAEU against the outside world. Kremlin-aligned commentators in search of an upside make the argument that by relinquishing some degree of sovereignty to this and other Moscow-led blocs, Belarus is actually bolstering its overall sovereignty in the longer term. This is no different to the way that Baltic nations, for example, were so quick to rush into the arms of NATO and the EU following the dissolution of the Soviet Union, the commentators would contend.

Another crisis, namely the coronavirus pandemic, appears to have been good news for intra-EAEU trade in food products.

The Eurasian Economic Commission, or EEC, the executive body of the EAEU, noted in an August 26 statement that the volume of that trade has increased by 2.5 percent, to $4.1 billion, in the first half of 2020, as compared to the same period last year. Soybeans, sugar and dairy products are leading contributors to this growth. Meanwhile, the trade of non-food agricultural products, which can mean things like fertilizers, wood and fibers, rose by 13 percent, to $320 million.

Trade is only one part of the EAEU equation.

One strand of the integration agenda envisions bloc-wide access to pensions. This would mean, to give one example, that a Kyrgyz expatriate laborer who worked and paid taxes in Russia would eventually be eligible for a regular pension from that country’s government, immaterial of whether they had subsequently relocated back to their home country.

An agreement had been in the works since 2014 and was finally inked by the bloc’s five leaders at a summit in St. Petersburg in December. In an important development, Russian

President Vladimir Putin presented a ratification bill on the agreement to the State Duma in August. Progress is likely to be smooth.

Notwithstanding the EAEU’s autarkic flavor, the bloc obviously trades with the rest of the world, but on the ground, this can often be less than simple. It is for this reason that the EEC has committed to drawing up a roadmap – the EAEU’s favorite method for kicking things into the long grass – to address sticking points. EEC board members assembled on August 10 to get this ball rolling.

The problem of Armenia’s physical access to the rest of the EAEU was highlighted as a problem. Because Armenia has no direct frontier with another EAEU member, it must send its goods through Georgia up to the Upper Lars border checkpoint, about 30 kilometers south of the Russian city of Vladikavkaz. Inspections of Russian border officials aimed at establishing the Armenian provenance of the imports are a headache, as one agricultural sector expert told ARKA news agency in June.

“The Upper Lars checkpoint on the Georgian-Russian border is the biggest obstacle Armenian importers are forced to overcome, despite the fact that we are a member of the Russian-led Eurasian Economic Union," the expert, Garnik Petrosyan, was cited as saying in June.

A not inconsiderable volume of exports is at stake. Armenia’s government estimates that the country exported 141,200 tons of agricultural products in 2019 – almost all of that goes to Russia.

The bruited roadmap will, the EEC forecasts, “exclude or minimize control measures on goods moving between bloc members” and “increase the level of mutual trust.”

Fat chance of that happening any time soon. Kazakhstan deeply distrusts Kyrgyzstan, a fact attested to by their fastidious border regime. And imminent political developments in Kyrgyzstan are hardly likely to mitigate that circumspection. The Kyrgyz parliamentary elections taking place on October 4 are all but certain to hand a healthy chunk of seats to a newly created party backed by a shadowy former top customs official accused by anti-corruption activists of masterminding a vast smuggling operation.