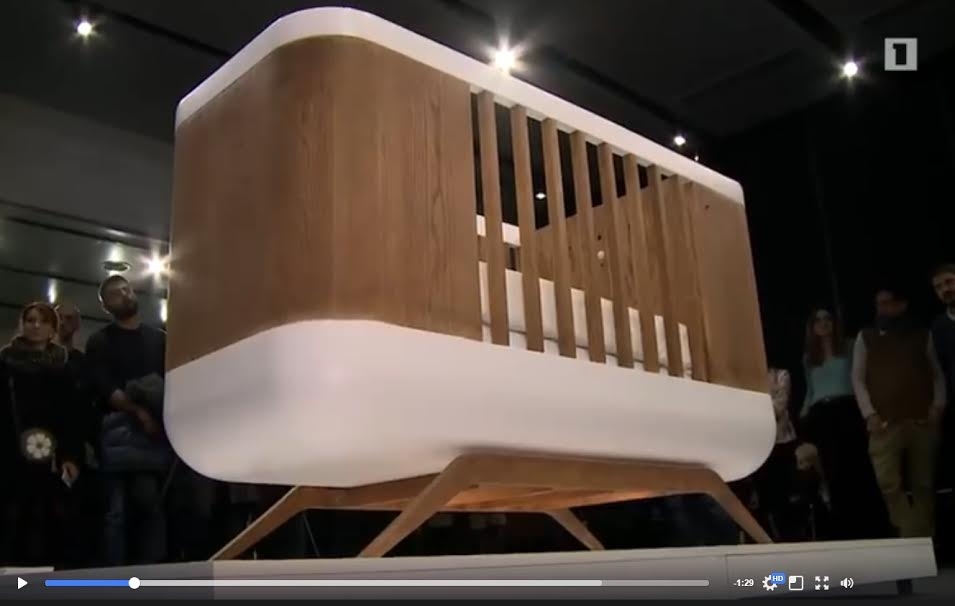 A new Armenian-made “smart crib” that can sing lullabies, tell stories and keep a watchful eye over a baby is the latest manifestation of the post-Soviet country’s burgeoning high-tech sector.

Caring for a baby can be an easier job when daddy is a programmer, as was the case with the team behind the Armenian smart bed, Cribby. Gor Shahbazian, one of Cribby’s creators and co-founder of an eponymous start-up, came up with the idea of an intelligent bassinet after his first son was born. A few likeminded programmers and computer designers and he then got together to devise an all-in-one baby-care contraption.

“When you buy a bed for the baby, you also need to buy a camera, audio monitors, audiobook player . . .We have all of this integrated in one bed,” Shahbazian said in an interview with the Arminfo news site.

Presented to the public in Yerevan last week, Cribby looks something like a futuristic Moses basket. With a frame handcrafted from wood, the bed is equipped with a camera, scales, movement censor and cloud storage for phone photos.

It is also a bit of a lullaby jukebox. If the baby starts crying, the bed’s music player can automatically start playing one of the songs from its vast selection of lullabies from around the world.  It can all be operated from a distance, using smartphone apps.

Armenia’s ever-imaginative, ever-expanding high-tech sector has produced other technological curiosities as well, such as locally designed smartphones and tablet computers – a post-Soviet first it shares with Russia.

The small, landlocked nation clearly aspires to be the Silicon Valley of the South Caucasus. Its government prioritizes information technology with measures like tax breaks and educational programs, and seeks to promote collaboration between local and international tech companies.

It is unclear, though, if the Cribby team can hit it big with their creation -- even in family-centric Armenia. Plans for export have been mentioned, but details about price and the scale of production remain under wraps. Cribby did not respond to Tamada Tales’ request for further information in time for publication.

Nonetheless, the tech daddies are optimistic about Cribby’s future. If babies could speak, they’d “tell you how great Cribby is,” joked one of the makers, Sergei Navasardian, in comments to PanArmenian.Net.

He hopes that parents will act on that alleged endorsement. If only Cribby could also change diapers, success would be guaranteed.